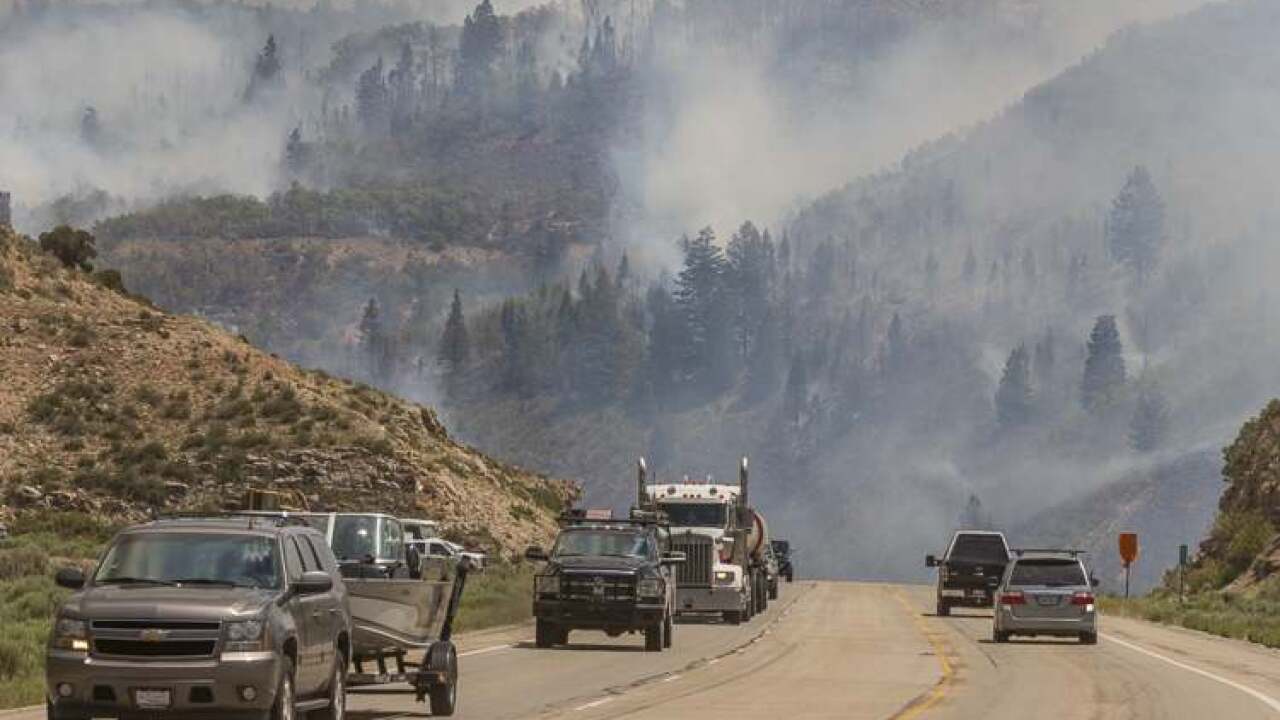 DUCHESNE COUNTY, Utah - Potentially dozens of residents near the Dollar Ridge Fire are set to find out Tuesday if their homes are still standing.

The Duchesne County Sheriff's Office announced two meetings only open to those with property inside the fire zone, where members of the Damage Assessment Team will discuss what the fire burned, and what it didn't touch.

On Monday, a fire spokesperson said the Dollar Ridge Fire is now 45 percent contained, and the fire stayed steady at its current 52,068 acres.

The Duchesne County Sheriff's Office has continued to lift more evacuation orders, allowing many residents to return to a relieving sight.

Bonner Hardegree got to work on his ranch, after getting the green light Sunday to come home.

He said his family and three dogs had been staying at a motel in Heber.

"They gave us like fifteen minutes to pack up and leave," he said, remembering when the evacuation orders came.

Hardegree said he turned on his irrigation system in hopes that it'd act as a fire line. The flames didn't go near his home, and he said he found everything intact.

"We were fortunate here, some people not so much," he said.

A few miles up Highway 40, people with property and homes in the Strawberry Pinnacles area and Camelot Resort drove past a "road closed" gate monitored by a Duchesne County Sheriff's Deputy Monday afternoon.

Brad and Lisa Stevens pulled up in their truck, one week after they were told to leave.

"It's been on pins and needles and nerves all day long," Lisa Stevens said.

She said she'd heard rumors that their property was okay, but she still wanted to see if for herself.

"We're just going to go see what we got left," she said. "Fingers crossed."

At a community meeting Monday night, residents learned about the progress in fighting the Dollar Ridge Fire. The crowd broke into applause to thank the Type 1 Team managing the fire.

Officials said they made good progress near the western end of the fire, near properties and communities.

Next comes tackling the southern edge, which spokesperson Phyllis Ashmead said sits in rough terrain. She said crews are on the ground 24/7, with an overnight shift taking over at 5 p.m. every night.

Lieutenant Governor Spencer Cox said a fire like this costs well over one million dollars a day to fight.

"Sad part is, we still have evacuees that don't know, yet," Cox said. "They don't know if their home made it or didn't make it. And that's the hardest part."

He said those who lost everything will take years to rebuild.

The meetings where those evacuees will find out the status of their properties will take place at the LDS Fruitland church at 10 a.m. and 6 p.m Tuesday.