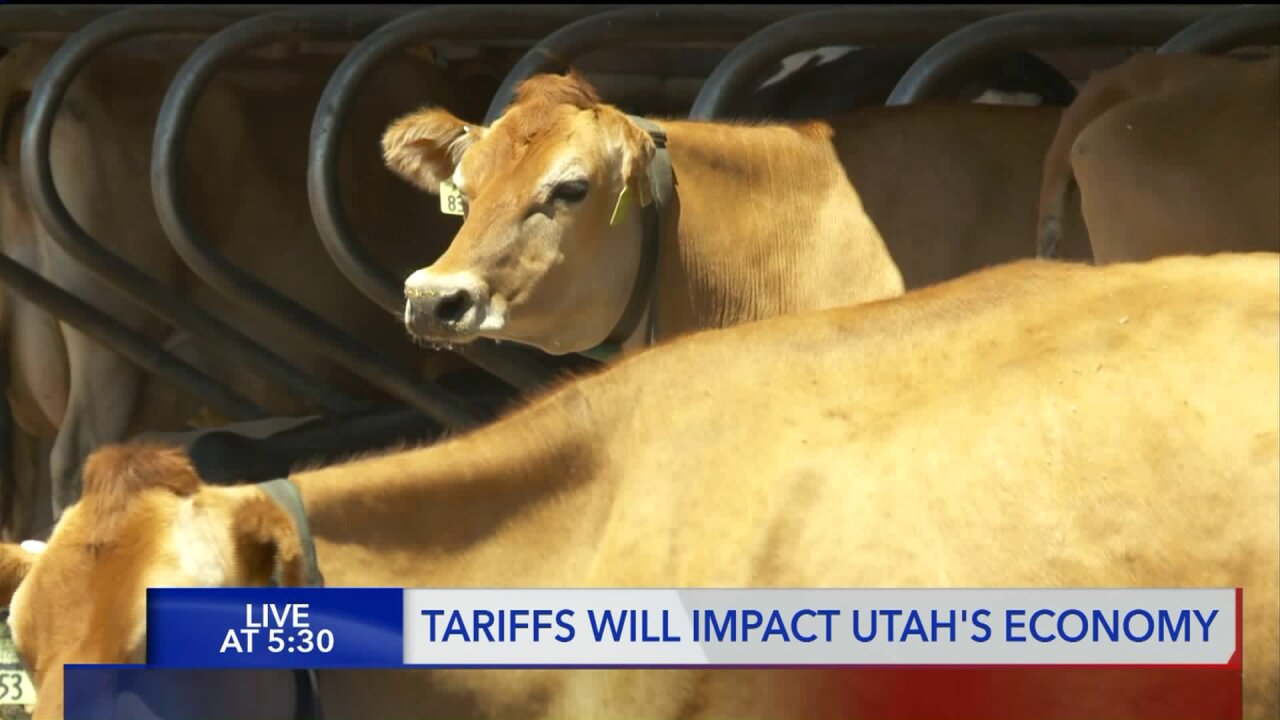 OGDEN, Utah -- Like a lot of farmers across the state, Ron Gibson is keenly aware of international trade agreements and their direct impact to their livelihood.

He is extremely concerned about tariffs between the United States and Canada, Mexico and China.

"We are saying our prayers it's not going to turn into some great big trade war," Gibson told FOX 13 on Friday.

Gibson's Green Acres, a dairy farm in western Weber County, has been in his family for six generations now. He's seen the good times and the bad.

On Friday, some tariffs announced by President Trump took effect. China announced retaliatory tariffs. Mexico and Canada have also slapped tariffs on goods being exported from the United States. A lot of those goods come from Utah and farms like Gibson's Green Acres.

"I understand what President Trump is trying to do. I disagree with the way he's trying to enact all of this," said Gibson, who is also the president of the Utah Farm Bureau. "I know that America has been at a disadvantage with trading with most of the world. I haven't been happy with how that worked. The problem today is we are starting to offend the people that buy our products."

Agriculture makes up nearly 20 percent of Utah's economy. It's mostly small and mid-sized family farms, said Jack Wilbur with Utah's Department of Agriculture and Food. They have already seen the impact of tariffs.

"We've had about $22 million of pork, for example, that has been sent to countries that have levied tariffs," he said Friday. "In dairy, it's several million."

A graphic showing tariffs and their impact on Utah. (Image courtesy Utah Dept. of Agriculture and Food)

The U.S. Chamber of Commerce has put out an interactive map highlighting the impact of a trade war. Utah stands to lose around $181 million in exported goods.

What consumers will see is costs for some products fluctuate, and then jobs get impacted.

"They'll have to probably cut back production. Then you'll see jobs -- farm worker jobs and factory worker jobs will be the first to go," Wilbur said. "Then you could potentially see small and medium-sized farm and agro-businesses going out of business."

Utah Governor Gary Herbert has been an outspoken critic of President Trump pursuing tariffs, warning it will harm the state's economy. He has long touted the global trade deals that Utah has lined up.

Gov. Herbert met with White House officials during a recent trip to Washington, D.C. and urged them to avoid a global trade war. The governor has said he understands the need for fair trade agreements, but has disagreed with tariffs.

As the cows made their way to the milking barn, Gibson said he wanted to see solutions before a trade war becomes a bigger impact than it already has been. He urged people to contact their congressional representatives to make their feelings on it known.

"The reality of it is, we are already running at a loss. It's really tough and the longer we extend that, we can only burn up our equity so long until we have no equity left," Gibson said.