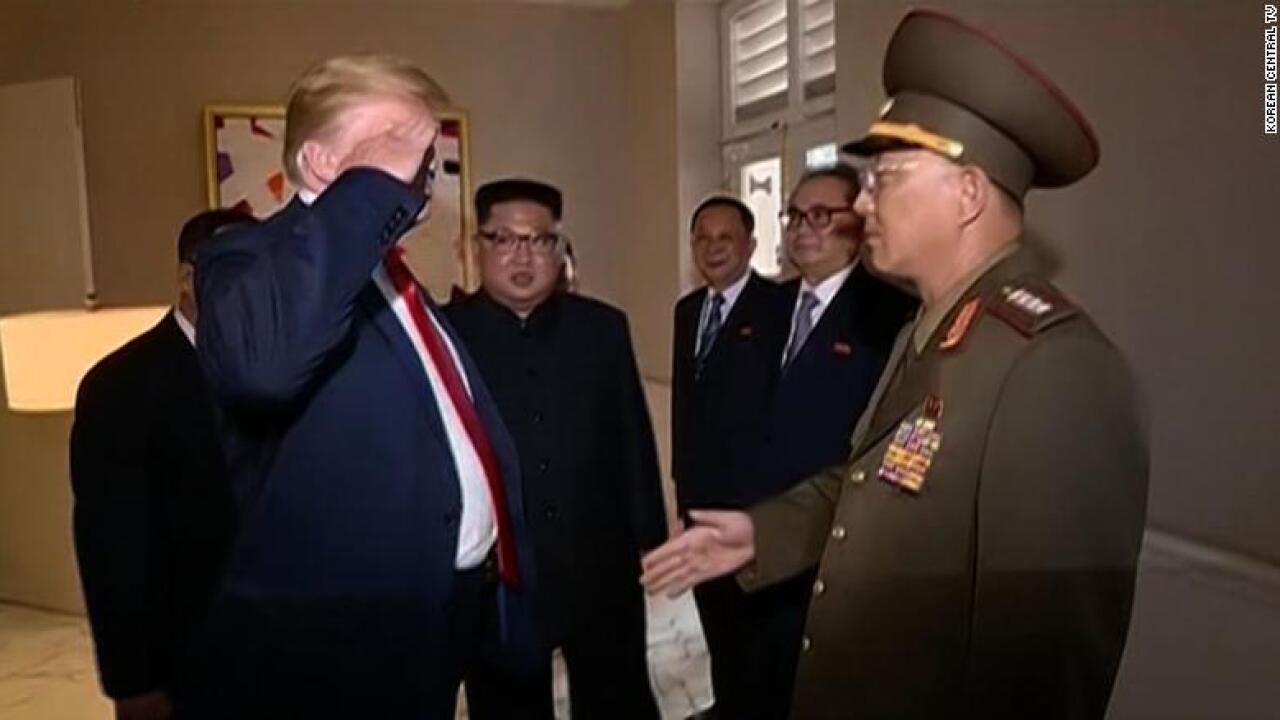 Newly released video footage from North Korean state media shows President Donald Trump returning a salute to a North Korean military general during this week’s summit in Singapore, an extraordinary display of respect from a US president to a top officer of a hostile regime.

In the military, returning a salute from a military officer of a friendly foreign nation is common practice for US military officers and considered a display of military professionalism. There is no rule that a US president is obliged to return a salute, which is considered a sign of mutual respect.

After Trump and North Korean leader Kim Jong Un walked down a colonnade to shake hands, the pair entered into a room filled with various members of Kim’s delegation, the video from North Korean broadcaster KCTV news shows.

Trump starts to shake hands with those in the room. Upon encountering North Korean Gen. No Kwang Chol, who was in full uniform, Trump first extends his hand, to which the general responds with a salute. Trump then salutes back, extends his hand again and the two men shake hands.

A US official told CNN that Trump was briefed on protocol, which is to not salute military officers from other countries. The White House, however, is not viewing Trump saluting a North Korean general as a mistake. It is being seen as all part of the broader goal that day, which was to show respect to Kim and his entourage, according to the official.

“It’s a common courtesy when a military official from another government salutes, that you return that,” Sanders told CNN’s Jim Acosta during Thursday’s White House press briefing.

CNN has reached out to the National Security Council for comment.

Trump frequently salutes people he sees in a military uniform, and he saluted Singapore military officials while visiting there for the summit with Kim. But North Korea operates one of the most oppressive regimes on Earth, and despite the President’s declaration on Wednesday that the country is “no longer a nuclear threat,” it is considered a major US adversary.

“They can see a propaganda value here and this is basically them showing the level of deference and respect that Trump has paid to them and to their military leaders,” Kirby told CNN’s Poppy Harlow on “CNN Newsroom.” “It was an inappropriate for him to do from a protocol perspective, but now he’s played right into the North’s propaganda about their legitimacy on the world stage.”

Kirby said the appropriate thing for Trump to do in that situation would have been to nod his head and shake the general’s hand.