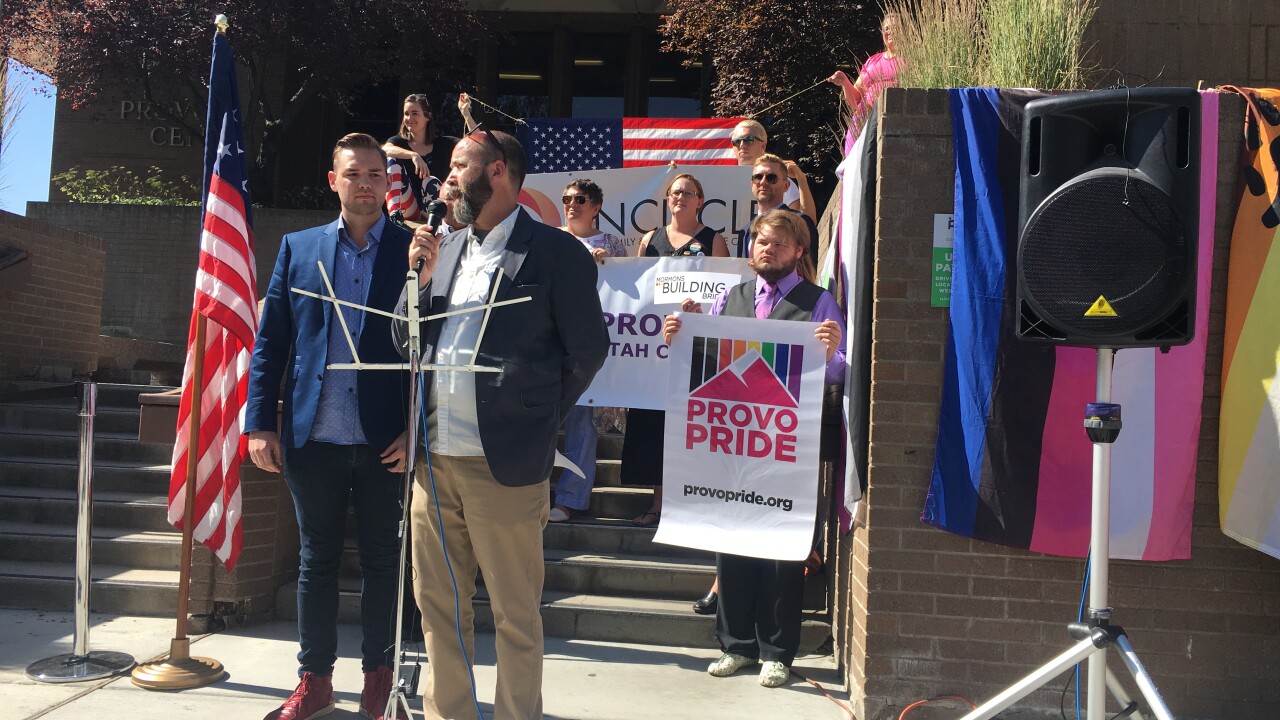 PROVO, Utah -- After hours of sometimes heated negotiation, a deal has been struck that lets a coalition of groups representing Utah County's lesbian, gay, bisexual and transgender community into the popular Freedom Festival parade and patriotic celebration.

It came after intense political and community pressure on the festival and hours of closed-door talks that FOX 13 was told included tears and shouting, but ultimately, agreement and compromise. Mormons Building Bridges' Kendall Wilcox said all LGBTQ groups would now be allowed in the parade with a float.

"They will house multiple LGBT groups on the float, it will be under the theme of 'Utah’s LGBT Community Celebrates America, United We Stand,'" he said.

The Freedom Festival offered to provide the parade float and pay for the supplies to decorate it, Wilcox said. They intended to put LGBTQ veterans on it. Provo Pride and Provo PFLAG will be allowed to march with a quilt showcasing different types of families, but the patriotic theme of the entry will be beefed up.

The about-face came after LGBTQ groups and some politicians pushed back at America's Freedom Festival, calling on public officials to pull funding for the massive parade and patriotic celebration. Just hours after Provo Mayor Michelle Kaufusi signed an agreement with the Freedom Festival to give more than $150,000 in money and infrastructure support for the Fourth of July celebration, the festival rejected all five LGBTQ groups that asked to be in the parade. The contract Provo City has with the Freedom Festival includes a nondiscrimination clause with sexual orientation alongside other protected classes like race, religion or gender.

At a news conference on Thursday outside Provo City Hall, the LGBTQ community groups said it sent a message they were not welcome in Utah County.

"Once again, we are left without words when watching the blatant discrimination that has occurred," said Jordan Sgro of the group Encircle.

Erika Munson of Mormons Building Bridges said tax dollars should not be spent to exclude people. The groups said the Freedom Festival contacted them Thursday morning to say they can re-apply and offered to meet to come to agreement on meeting the theme and standards of the parade.

"It does look like discrimination when they say that," Provo PFLAG's Randy Glasscock said of the festival's standards.

Utah County Commissioner Nathan Ivie was incensed by the festival's decision, calling their reasoning "bull----." He threatened to revoke Utah County's $113,000 contribution if they did not allow the LGBTQ groups in.

"I have no objections to a private organization, that’s privately funded doing what they want to do and controlling how they want to control it. But the instant you take public funds? It’s a different ballgame. And you better dang well be inclusive," he told FOX 13.

Mayor Kaufusi would not meet with reporters on Thursday, but posted a video to Facebook expressing her disappointment with the Freedom Festival's decision. The mayor said she believed it may be too late to yank funding for the Freedom Festival, but also said she would prod all sides to keep negotiating.

"We’re above this. We’re better than this and we need to resolve it. Or we’re going to lose the whole Freedom Festival," she said.

America's Freedom Festival Executive Director Paul Warner told FOX 13 he believed they could come to an agreement on ways that the LGBTQ groups could have their entries fit with the theme and standards of the parade. He insisted they were not anti-gay, but he objected to some of the groups marching with banners and flags.

"We don’t want it to be a sexual orientation parade," he said.

Warner said he did not believe the 250,000 people who watch the parade every year care what someone's sexual orientation is. He said if an LGBT veteran wanted to march, they should march with other veterans.

"I think so. We’re hopeful we can. We’re not anti to what they’re doing," Warner said.

Of the 120 parade entries, 22 were rejected. Warner said the others included companies who wanted to advertise their wares and political candidates seeking office. The parade rejected Mitt Romney and his Republican primary challenger, Mike Kennedy, from being in this year's event. However, current office holders like Gov. Gary Herbert and Mayor Kaufusi will be allowed in.

Warner told FOX 13 they were making other changes to the parade. For example, Mormon missionaries would no longer be marching in the parade but instead would serve as festival volunteers. Wards are also not likely to participate with their own floats.