Venezuelans, rocked by poverty and inflation, head to polls 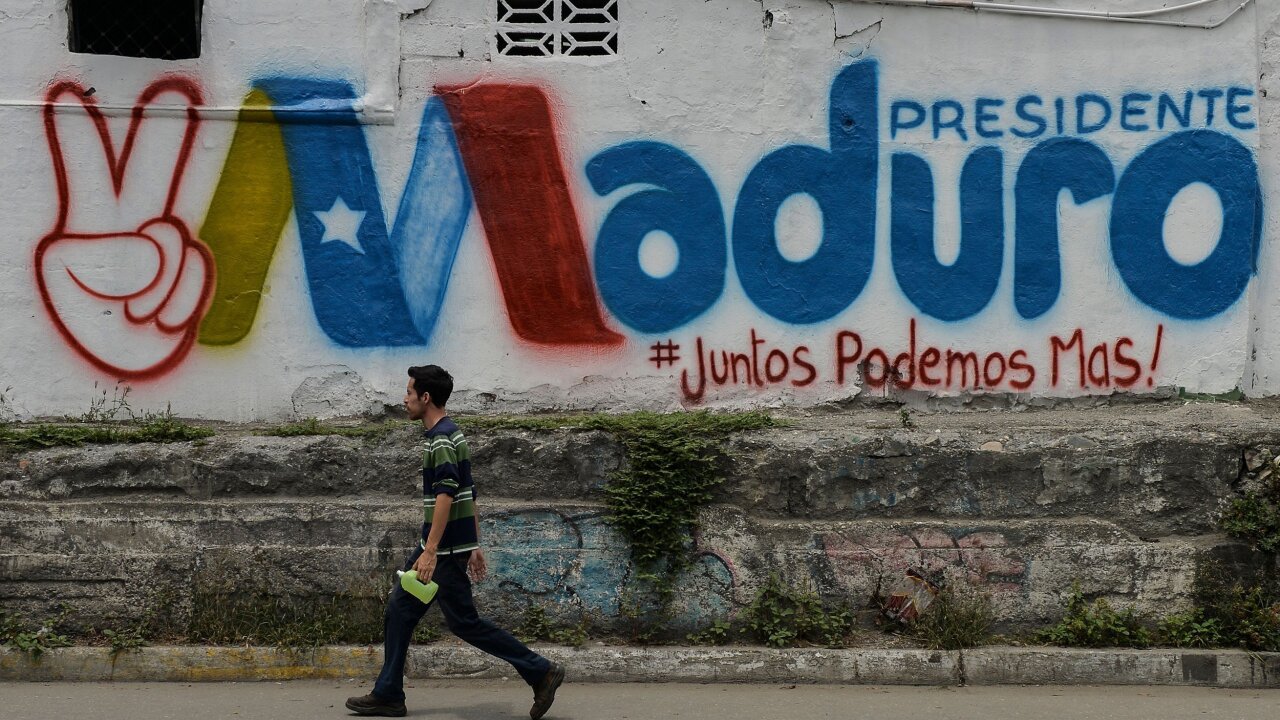 A man walks past graffiti in support of Venezuelan President Nicolas Maduro.

Venezuelans trekked to the polls Sunday to elect a new president, amid widespread economic anxiety and voter apathy.

President Nicolas Maduro is seeking reelection for a six-year term in an electoral process that has been criticized both inside and outside Venezuela.

The main opposition coalition is boycotting the election, though Maduro is not without challengers.

Maduro’s chief rival for the presidency is Henri Falcon, a former state governor and onetime loyalist of the ruling party who broke ranks in 2010. On Sunday Falcon cited hundreds of complaints of election violations. Election officials said they would address the claims.

Amid allegations from leaders in the region that the election process lacks legitimacy, Maduro said the outcome will be respected.

US Secretary of State Mike Pompeo said on Sunday that he was watching the election closely. “Sham elections change nothing. We need Venezuelan people running this country … a nation with so much to offer the world,” he said on Twitter.

Maduro predicted a good electoral turnout and encouraged voters to head to the polls. “Today is a historic day. Let no one miss this historic day,” he said, after casting his ballot and claiming his was the first vote of the day.

Later Sunday, he took to Facebook to call on people to vote, offering to provide transportation to Venezuelans living in remote areas.

“We should feel proud that we have not had any mishaps, that none of the candidates have felt threatened solely for being a candidate,” Communications Minister Jorge Rodríguez said.

The country has endured political tumult and economic misery, including food and medicine shortages, and hyperinflation.

“Nothing is normal,” said citizen Carmen Herrera. “The little bit of money that we earn is not enough to buy even half dozen eggs.”

“I would like to see a change because at this rate we’re not going to get anywhere.”

Because of the deteriorating situation, an estimated 1.6 million people fled the country between 2015 and 2017, according to the International Organization for Migration.

Maduro has been Venezuela’s President since former President Hugo Chavez died in 2013.

Under Chavez, the country turned toward socialism. Many Venezuelans saw him as the hero of the poor. Before he died, Chavez picked Maduro as his successor, which helped put Maduro over the top in the 2013 presidential election.

Once he took power, Maduro kept up Chavez’s practices such as huge welfare programs and price controls for most goods, including food.

Venezuela holds the world’s largest supply of crude oil — which once seemed like an endless gusher of cash for the government.

Plummeting oil prices crashed the country’s economy in 2016. It has since completely collapsed, and the country now finds itself in the middle of a financial crisis. The International Monetary Fund expects that inflation in Venezuela will reach 13,000% in 2018.

Falcon was once a Chavez supporter. In 2010, he broke with the ruling party and has been a vocal critic of the government in recent years. He believes the way out of the financial crisis is the dollarization of the country — pinning the country’s economy on the US dollar.

Many of those who are boycotting the election believe it is rigged. The event is an afterthought for so many citizens battling despair, fatigue and economic insecurity. People say they are preoccupied with getting their next meal or leaving the country.

“Both my family and I are very undecided about whether we’re going to vote,” said Betty Fernandez.

Falcon — who cast a ballot and spoke to reporters at a polling station — said this is not the time to be complacent. “The hunger situation, the misery, the uncontrolled political situation that our country lives is truly alarming.”

He said there have been no less than 350 reports of election violations. He urged security forces to address the issues.

Tibisay Lucena, president of the National Electoral Council, is following up.

“We haven’t had any significant incident so far, we don’t have any knowledge of any aggression made or of any greater difficulty during the process,” said Lucena.

CNN staff said one polling station was very quiet and the turnout wasn’t very high at that spot.

Ecuador’s former President Rafael Correa — who has a good relationship with Maduro — was in Caracas monitoring the elections and cited a healthy turnout.