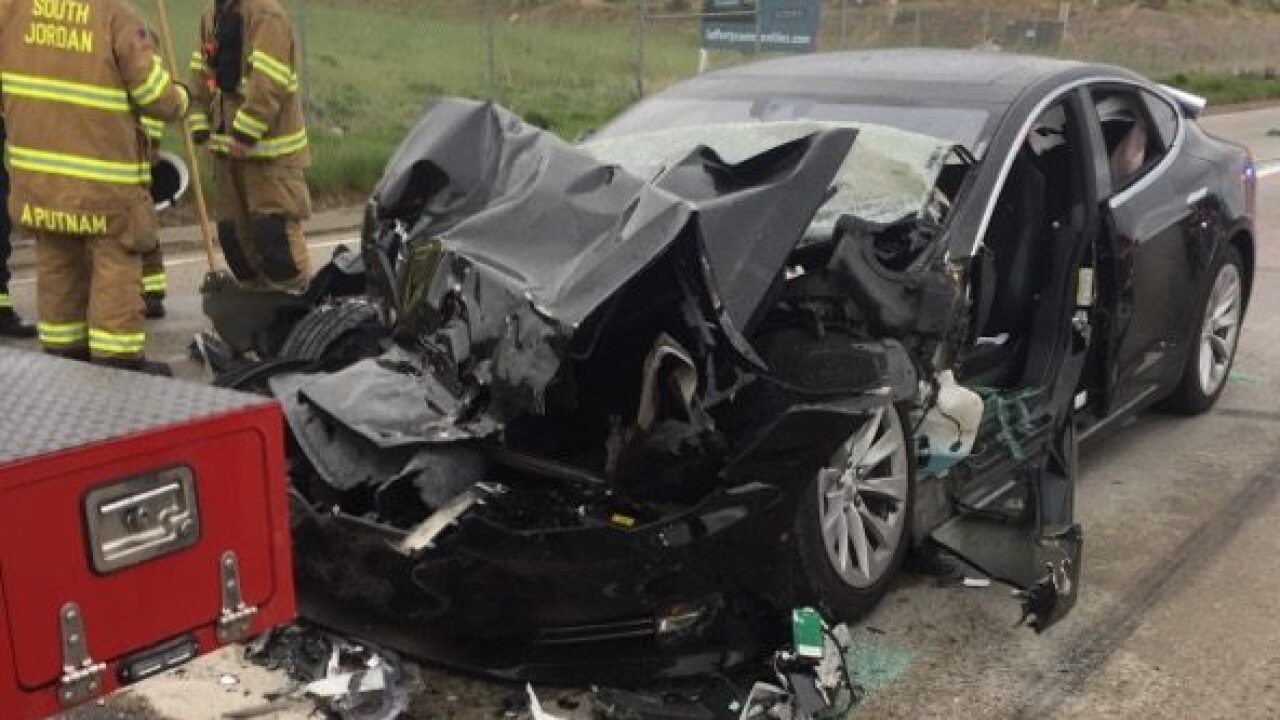 SOUTH JORDAN, Utah — The National Highway Traffic Safety Administration is dispatching a team to investigate a recent crash in South Jordan in which the driver of a Tesla vehicle reported she had placed the car on autopilot mode at the time of the crash, Reuters reports.

“Consistent with NHTSA’s oversight and authority over the safety of all motor vehicles and equipment, the agency has launched its special crash investigations team to gather information on the South Jordon [sic], Utah, crash. NHTSA will take appropriate action based on its review,” according to a statement shared by Wall Street Journal reporter Tim Higgins, which he attributed to NHTSA.

On Friday, a 28-year-old Lehi woman told police she had been looking at her phone when she crashed a Tesla Model S into the back of a Unified Fire Authority mechanic truck.

Police told FOX 13 that the woman reported she was using the car’s autopilot feature at the time of the crash, which happened on Bangerter Highway and 10400 S around 6:30 p.m. that day.

“While Tesla’s Autopilot feature indicates that a driver must be attentive at all times, the driver admitted that she was looking at her phone prior to the collision. Based upon witness information, the driver of the Tesla did not brake or take any action to avoid the collision,” a statement from South Jordan Police said.

The Tesla driver suffered a broken right foot and Unified Fire truck driver was checked for whiplash, but not taken to a hospital, according to police.

According to a statement released South Jordan released Wednesday, Tesla technicians recovered data recorded by the vehicle and they found the driver had repeatedly engaged, canceled and re-engaged the car’s Autosteer and Traffic Aware Cruise Control functions.

“Drivers are repeatedly advised Autopilot features do not make Tesla vehicles ‘autonomous’ and that the driver absolutely must remain vigilant with their eyes on the road, hands on the wheel and they must be prepared to take any and all action necessary to avoid hazards on the road,” the statement said, citing Tesla.

According to the data gathered by Tesla and released by South Jordan Police, the driver took her hands off the car’s steering wheel more than a dozen times, and, on two occasions, her hands were off the wheel for more than a minute.

“Each time she put her hands back on the wheel, she took them back off the wheel after a few seconds,” Tesla’s report, as released by South Jordan Police Department, said. “About 1 minute and 22 seconds before the crash, she re-enabled Autosteer and Cruise Control, and then, within two seconds, took her hands off the steering wheel again. She did not touch the steering wheel for the next 80 seconds until the crash happened; this is consistent with her admission that she was looking at her phone at the time.”

According to the report, the Tesla was traveling at 60 mph at the time of the crash, and the driver braked “fractions of a second” prior to the crash.

“Contrary to the proper use of Autopilot, the driver did not pay attention to the road at all times, did not keep her hands on the steering wheel, and she used it on a street with no center median and with stoplight controlled intersections,” the report said.

FOX 13 is waiting to hear from NHTSA and Tesla for additional details.

Watch FOX 13 News and fox13now.com for updates on this story.
[Editor’s Note: An earlier version of this story incorrectly identified the city as West Jordan.]