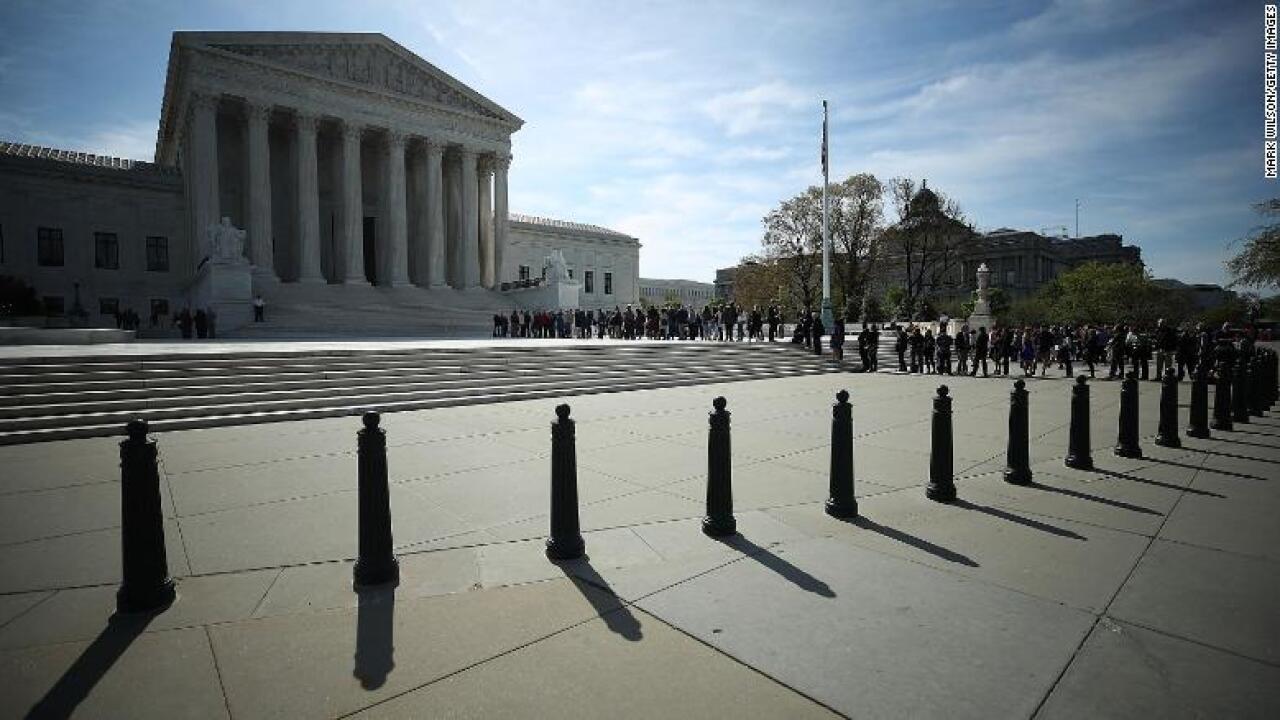 The Supreme Court cleared the way on Monday for states to legalize sports betting, striking down a 1992 federal law that had prohibited most states from authorizing sports betting.

The 6-3 ruling is a victory for New Jersey and other states who have considered allowing sports gambling as a way to encourage tourism and tax revenue. The NCAA, NFL and NBA had backed the federal prohibition.

“The legalization of sports gambling requires an important policy choice, but the choice is not ours to make,” Justice Samuel Alito wrote in the 6-3 opinion. “Congress can regulate sports gambling directly, but if it elects not to do so, each state is free to act on its own.”

Immediately after the ruling, the stock price for Caesars Entertainment rose 6%, and DraftKings said it will enter the sports betting market.

“Today’s decision clears the way for all states to make their own decisions about legalizing sports betting, and in one fell swoop gets rid of Nevada’s monopoly on the subject and the 1992 federal statute that had protected it,” said Steve Vladeck, CNN Supreme Court analyst and professor of law at the University of Texas School of Law.

“The question now is whether Congress will leave the states to make their own choices or will now try to enact some kind of federal regulation of sports betting,” Vladeck added.

“I am thrilled to see the Supreme Court finally side with New Jersey and strike down the arbitrary ban on sports betting imposed by Congress decades ago,” Murphy said Monday. “Today’s ruling will finally allow for authorized facilities in New Jersey to take the same bets that are legal in other states in our country.”

The controversy started in 2011, when New Jersey voters approved a measure to legalize sports betting to help the casino industries in a faltering economy. But the state law was immediately challenged by professional sports leagues and the NCAA, which pointed to a federal law passed in 1992 that bans state sports betting with some exceptions.

NCAA’s chief legal officer Donald Remy said in a statement that while the organization is still reviewing how court’s decision affects college sports, it will “will adjust sports wagering and championship policies to align with the direction from the court.”

Major League Baseball released a statement saying the decision will have “profound effects” on the sport.

“Our most important priority is protecting the integrity of our games,” MLB’s statement continued. “We will continue to support legislation that creates air-tight coordination and partnerships between the state, the casino operators and the governing bodies in sports toward that goal.”

The PGA Tour said in a statement following the ruling that it remains aligned with the major sports leagues.

“We believe that regulation is the most effective way of ensuring integrity in competition, protecting consumers, engaging fans and generating revenue for government, operators and leagues,” the statement said.

“It brings a multibillion dollar industry out of the shadows and into the sunlight, where its integrity can be guaranteed and consumers can be better protected,” Leonsis wrote in a blog post, adding, “I think that the increased transparency that will accompany more legalized betting around the country will only further protect against potential corruption.”

Justice Ruth Bader Ginsburg dissented, and joined by Justice Sonia Sotomayor and Justice Stephen Breyer in part, criticized the majority for wielding an ax to “cut down” down the entire statute instead of “using a scalpel to trim the statute.” She suggested the law could be severed for a less broad ruling that would only impact the states and not private parties.

The Professional and Amateur Sports Protection Act made it unlawful for a state to “sponsor, operate, advertise, promote, license, or authorize by law” sports wagering. Nevada was exempted from the law, and three other states — Montana, Delaware, and Oregon — that had already enacted sports lotteries were allowed to continue to do so. The law was passed out of concern that sports gambling might change the nature of sporting events from wholesome entertainment to a device for gambling.

At the time, New Jersey could have allowed sports wagering if it had acted within a year of the law’s effective date, but chose not to. However, the state later changed its mind and passed a law to allow sports betting. Sports leagues challenged the law citing the 1992 law, and they won in federal court.

New Jersey then tried to pass a new law in 2014 that simply repealed key provisions of its prohibitions on sports wagering to the extent they applied at racetracks and casinos. Again, the courts ruled against the state, prompting Christie to take the case to the Supreme Court. New Jersey saw the case as a states’ right issue and argued that the 1992 law is unconstitutional because it violates the so called “anti commandeering” principle of the 10th Amendment that bars Congress from ordering states to participate in a federal regulatory scheme.

“The majority relied upon the ‘anti-commandeering’ doctrine, holding that Congress can choose federal policies, but can’t dictate to states what their own policies must be,” Vladeck said.

Christie celebrated the ruling in a tweet. “New Jersey citizens wanted sports gambling and the federal Gov’t had no right to tell them no. The Supreme Court agrees with us today.”

West Virginia and 17 other states, and the governors of three more, sided with New Jersey in the case. They said in court briefs that if the high court sided with the sporting leagues, “Congress could compel the entire machinery of state government — legislatures, executives and courts — to maintain and enforce repealed state laws at the behest of the federal government.”

Lawyers for the leagues responded that the federal law does not run afoul of the Constitution because it doesn’t force the states to take any action or become a part of any federal regulatory scheme. It simply prohibits sports betting in the states.

They argued that a state law legalizing sports betting is preempted by existing federal law.

“New Jersey’s real complaint is that Congress has forbidden it from enacting the specific policy it prefers — namely, state sports gambling at its state-licensed casinos and race tracks,” wrote Paul D. Clement, a lawyer representing the NCAA, the NBA, the NFL and others.