Sit up straight and pay attention to this! You’re giving yourself ‘tech neck’ 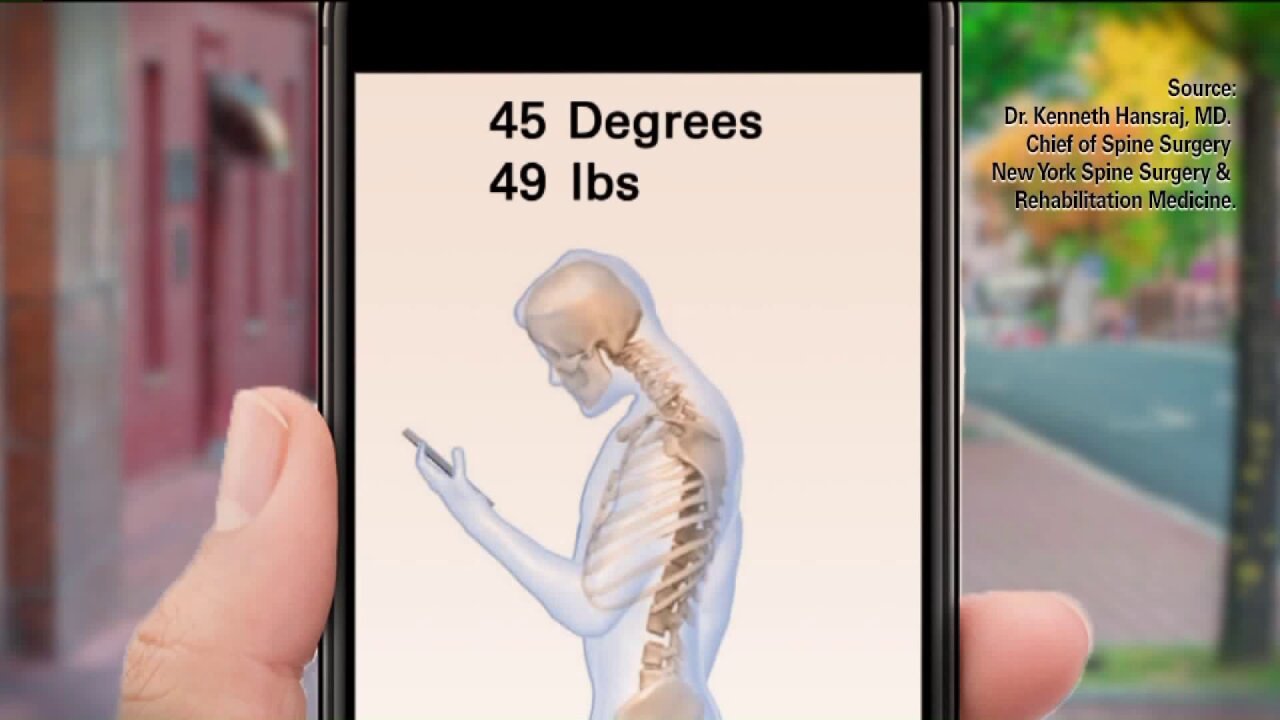 RIVERTON, Utah -- In Sam Rogers' classroom at Riverton High School, some of his students will try to sneak a text.

Their heads will bend down as they type away in their lap. Some aren't really subtle about it. Like most teens in America, they spend a lot of time on their phones.

"It's beside me when I wake up. I check it before I go into the shower, when I'm eating breakfast," said Cole Hartney, a junior at Riverton High. "It's there when I go to bed, the last thing I check."

Sam Horrocks volunteered spending as much as 15 hours a day on a phone for art projects and other work, then walked it back to "maybe 10 hours a day."

The strain of spending so much time hunched over phones, tablets and computers for increasing amounts of time is creating a problem that physical therapists and chiropractors have nicknamed "tech neck."

"Some people might even say it's an epidemic," said Linda Vernon Scholl, a physical therapist at the University of Utah's Orthopaedic Center.

Scholl said "tech neck" affects all generations, but it is becoming an increasing problem with younger people, who are seeking treatment for neck and back pain.

Sophie Wickham is familiar with it. She's currently in physical therapy for injuries in a car crash, but said she's also been treated for pain caused by how she holds her smartphone.

"Especially when I'm in a pretty boring day at school and I'm on my phone the whole time... my shoulders are up here and I have a headache," the Riverton High senior told FOX 13.

Scholl points to research conducted by Dr. Kenneth Hansraj of New York Spine Surgery and Rehabilitation. It found that as the head tilts forward, it increases the force on the spine by 10 pounds.

"Imagine an 8-year-old hanging from around your neck," Scholl said.

See a video of the spinal impact by Dr. Hansraj here:

It's not necessarily the action that's the problem, but how long we're doing it for. The analytics firm Flurry has estimated the average smartphone user spends more than five hours a day on the device.

"It's nuts to me that people are on their phones so much it causes that kind of stuff," said Riverton High junior Tanner Perry, who said he limits his phone use to "a couple of hours a day."

Scholl said as bad as it sounds, there's a simple fix.

Scholl said there are a number of exercises people can do to avoid wreaking havoc on the back and neck. They include:

Wickham said technology is not a bad thing, but people do need to remember their posture.

Cole Hartney, a junior at Riverton High, said his mother has been taking him to task for not sitting up straight and he's listening.

"I was texting, my head was down and she was like, 'Put your head up!' I was like, 'Why does it matter?'" he recalled. "She said, 'Because, if you keep doing that, 30 years down the road, you're going to have head and neck problems!'"