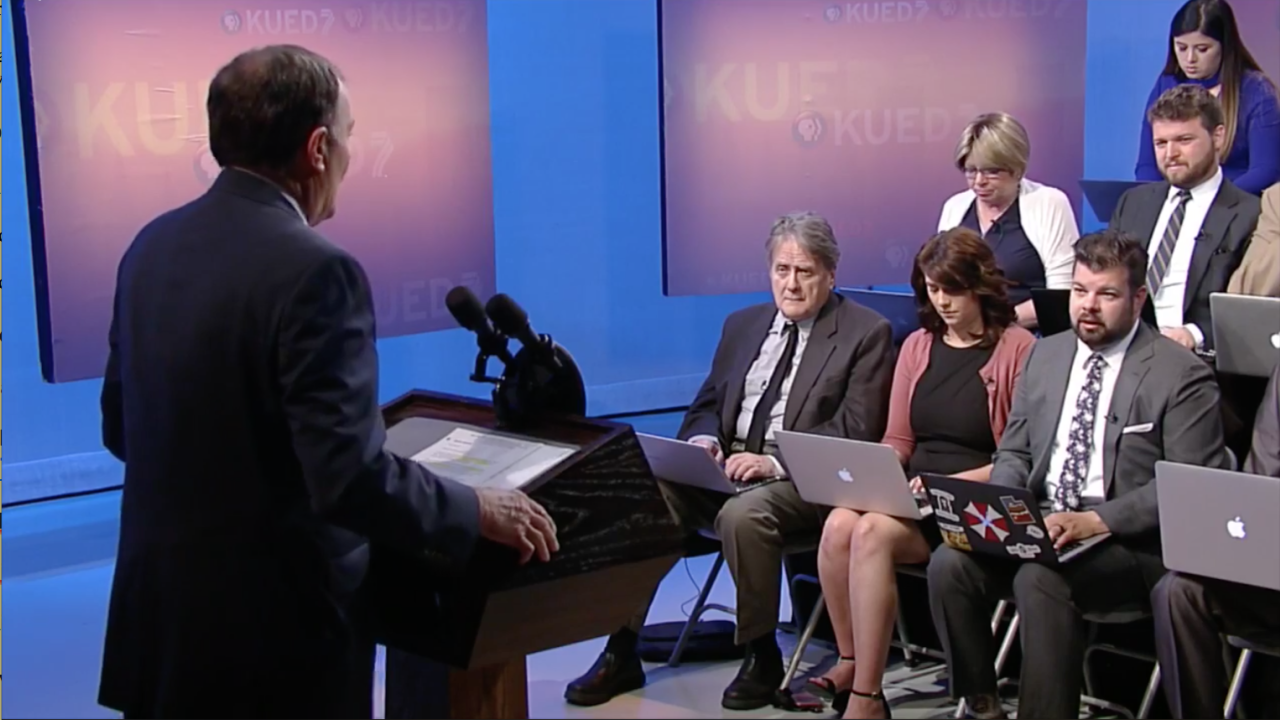 Gov. Gary Herbert speaks to reporters at his monthly news conference on KUED on April 26, 2018. (Image via KUED)

SALT LAKE CITY -- Governor Gary Herbert weighed in on more ballot initiatives that could be before voters in November.

Speaking to reporters at his monthly news conference on KUED, the governor went down the list of those seeking to qualify. The governor said that while he personally does not view ballot initiatives as a good way to make law, "I appreciate that we have an initiative process."

Gov. Gary Herbert speaks to reporters at his monthly news conference on KUED on April 26, 2018. (Image via KUED)

The governor chastised those now pushing to get people who signed petitions to remove their signatures ahead of the May 15 deadline to validate and qualify the initiatives for the ballot.

"I think it’s good to have the people’s voice heard. I’m a little bit off-put by those who would go out there and try to talk people into taking their signature off the petition," Gov. Herbert said. "Let’s have the debate. Let’s hear the pros and cons and vote and let the people speak."

Supporters of medical marijuana and Count My Vote told FOX 13 they had some reports of people being asked to remove their signatures. The information is a matter of public record, obtained through county clerks (much like the state's voter database). Critics of the practice say it undercuts a ballot initiative's chances to qualify.

"Those kind of games are misleading and disingenuous," said Taylor Morgan with Count My Vote.

Volunteers with the Utah Patients Coalition gather signatures in support of medical marijuana on the 2018 ballot in Utah. (Photo by Ben Winslow, FOX 13 News)

Gov. Herbert has actively opposed the medical marijuana ballot initiative. During his news conference, he reiterated he was not opposed to medical cannabis itself, but he had problems with the initiative language. The governor said he believed regulations on marijuana would be too lax and it would not be treated as a controlled substance.

"You can’t just sprinkle a little seed, you know, into your muffins and brownies and say that’s good and trial and error," he told reporters.

Gov. Herbert also said he would not support the Utah Decides Healthcare ballot initiative, which would force the state to go for full Medicaid expansion.

RyLee Curtis with Utah Decides Healthcare said it was focused on "listening to what Utahns want."

"While we respect the governor, more than 60% of residents in our state favor expanding Medicaid to more than 150,000 of our friends, neighbors and families who don’t have health care right now," she said. "The only way to accomplish that goal and bring back more than $800 million in tax money from Washington, DC, is to pass a ballot initiative this November."

The governor said he did not have a problem with the idea pushed by Better Boundaries, which would create an independent redistricting commission. Gov. Herbert said it would not give Democrats a congressional district solely to themselves.

"It’s not going to be the silver bullet everyone thinks it’s going to be, but I have no opposition to having independent redistricting," he said.

Better Boundaries said it was backed by a majority of Utahns and appreciated elected officials who supported it.

"Utahns understand that voters should choose their leaders, politicians shouldn't get to choose their voters. An independent redistricting commission ensures that the needs of Utahns and their communities will come first in drawing legislative and congressional districts - not the wishes of politicians or parties," the group said in a statement.

Gov. Herbert also signaled his support for Count My Vote, which has been the subject of the Utah Republican Party's "civil war." It would keep the dual-path for political candidates to get on the ballot. They can either gather signatures or go through the caucus/convention system. That has divided the party into factions and sparked lawsuits.

At his news conference, the governor decried the "divisiveness" within the Utah Republican Party. Still, he backed the candidates who gathered signatures to guarantee themselves a spot on the ballot. He supported Mitt Romney for U.S. Senate and Rep. John Curtis in the 3rd Congressional District race. (Herbert himself gathered signatures and was forced into a primary by GOP delegates during his last election bid.)

"This will make an improvement, so I think that’s a good thing," the governor said of Count My Vote.

The group said it was glad for his remarks.

"We appreciate Gov. Herbert’s support and we look forward to getting on the ballot so voters can decide once and for all how they choose their candidates," Morgan said.