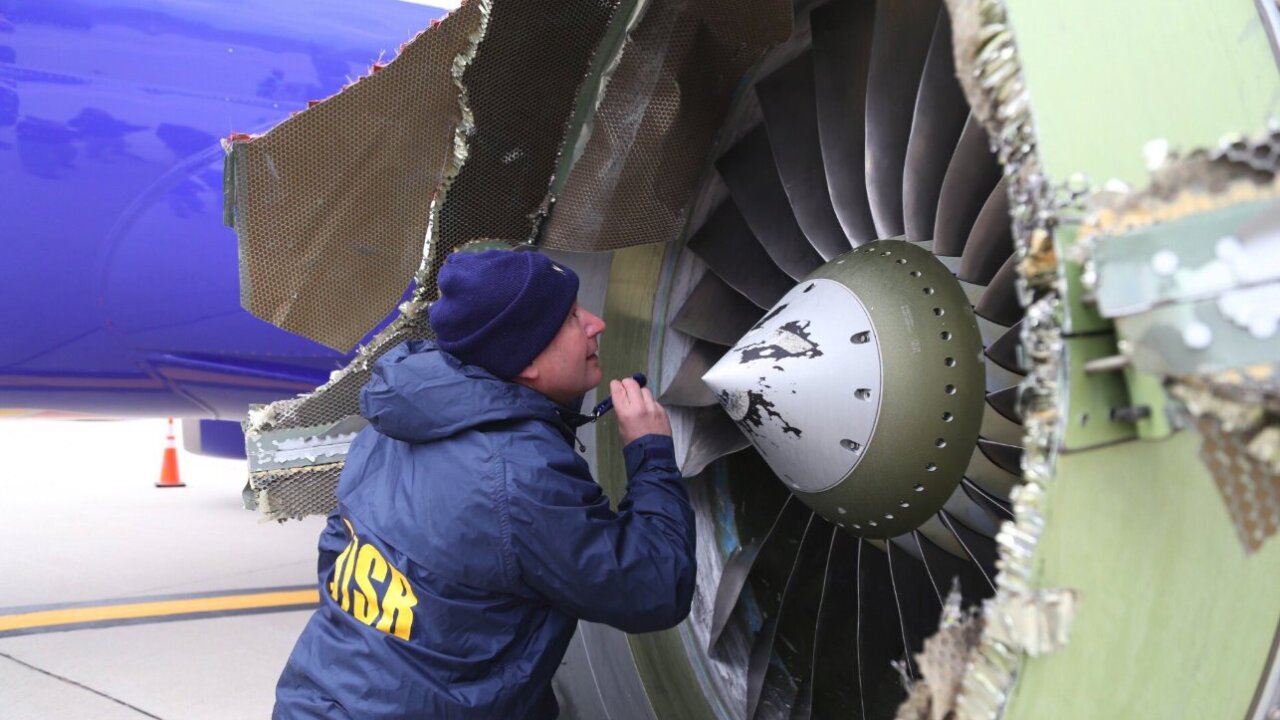 The National Transportation Safety Board is onsite inspecting a Southwest airline plane after engine failure caused the plane to make an emergency landing at Philadelphia International Airport.

PHILADELPHIA — The National Transportation Safety Board is finishing up its initial examination into the deadly Southwest Airlines engine failure Thursday -- but many questions remain unanswered.

Investigators can't explain with certainty why the left engine of Southwest Airlines Flight 1380 malfunctioned when the plane was reaching over 32,000 feet. It's too soon to determine what happened, said National Transportation Safety Board Chairman Robert Sumwalt.

"I know people would want answers right away. We would do a very methodical investigation," Sumwalt told reporters Wednesday in Philadelphia. "Right now, we just want to document everything that we can."

They've interviewed the pilots, examined the damaged engine and collected video footage from passengers who lived through those 22 minutes of chaos. They recovered the airplane's cockpit voice recorder and flight data recorder. And they are still tracking down debris from the engine.

As the NTSB leaves the Philadelphia airport, here is what's next for investigators:

The NTSB will look into how an interior crack on a fan blade could have led to the engine failure. Sumwalt said it was "certainly not detectable from looking at it from the outside."

The crack was found in a fan blade of the CFM International 56-7B turbofan engine that separated during the incident.

The blade had broken twice, where the blade attached to a hub and almost halfway through it, Sumwalt said.

One of the cracks was consistent with metal fatigue, he said.

Southwest Airlines said in an email Wednesday that workers did a visual inspection of the engine that failed. An ultrasonic inspection of engine was scheduled to take place this December.

The Federal Aviation Administration said Wednesday night it will issue a directive in the next two weeks requiring inspections of certain CFM56-7B engines. The directive will require an ultrasonic inspection of fan blades when they reach a fixed number of cycles.

A look into the aircraft's maintenance records

A team of investigators are expected to travel to the airline's headquarters in Dallas next week and search through the plane's records.

"They will begin to examine the inspection records for this engine and specifically for this fan section, these fan blades to understand the inspection history and what type of inspections were conducted," Sumwalt said.

Every engine manufacturer and airline monitors the engines "very, very closely," according to John Goglia, a former NTSB board member.

Sumwalt said they have not determined the age of the engine.

The NSTB wants to locate every piece of the damaged engine and then rebuild it.

The engine cowling was found about 65 miles northwest of Philadelphia.

Residents have reported some debris but no "internal components" have been recovered yet.

Once they have all the pieces, a team will lay them all down on a hangar's floor and piece it back together, Sumwalt said.

"We are still in the very beginning stations of looking for what we need," he said.

Captain Tammie Jo Shults and First Officer Darren Ellisor were interviewed by investigators on Wednesday, but their actions during the flight will still be under review.

Sumwalt said the pilots were able to straighten the jet within seconds after going into a 41.3 degree angle -- something not common at all.

They were able to land the plane going at a speed of 165 knots, which is about 190 miles per hour. The usual speed is 135 knots.

He only said the pilots seemed "very calm and assured of what they were doing."

"My hat is off to them, they behaved in a manner their training called for," he added.