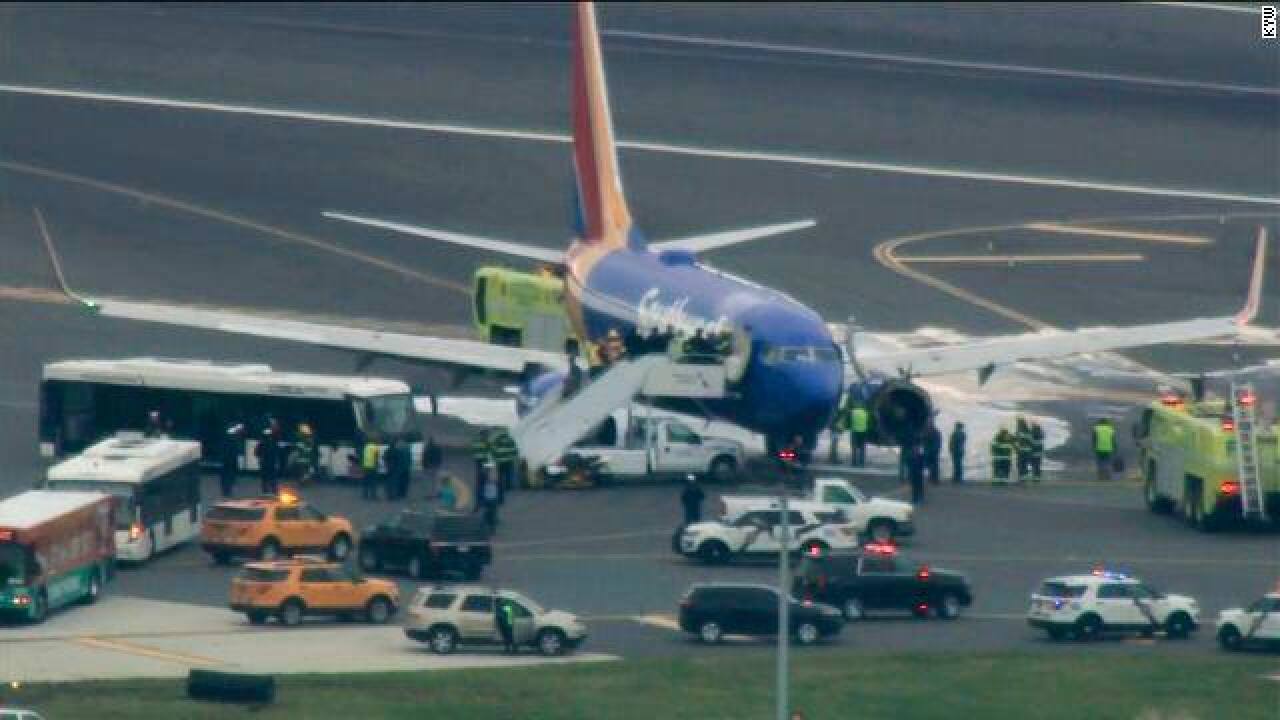 PHILADELPHIA – One person has died after an engine exploded in mid-air Tuesday, leading desperate passengers aboard the Southwest Airlines flight to try pulling her to safety amid a chaotic scene with “blood everywhere,” frightened witnesses told Fox News.

The National Transportation Safety Board (NTSB) confirmed Tuesday afternoon that one person was killed in the incident.

The passenger went to the hospital in critical condition after the plane made the emergency landing in Philadelphia.

The pilot, who was not immediately identified, asked an air traffic control operator via radio for emergency services to be on the scene for the injured passengers when the aircraft lands, Fox News reported.

When the pilot was asked if the plane was on fire they replied, “No, it’s not on fire but part of it’s missing. They said there is a hole and someone went out.”

Passengers aboard the Dallas-bound Southwest Airlines flight said they heard an explosion before seeing oxygen masks drop from the ceiling.

“Everybody was going crazy, and yelling and screaming,” passenger Marty Martinez told CNN of the flight, which left New York and was forced to make an emergency landing in Philadelphia.

“As the plane is going down, I am literally purchasing internet just so I can get some kind of communication to the outside world,” he said.

The crew reported damage to one of the aircraft’s engines as well as the fuselage and a window, the Federal Aviation Administration said in a statement.

The injured woman’s arms and body were sucked toward the opening in the plane, Martinez recalled in a phone interview.

Objects flew out the hole where the window had been, and “passengers right next to her were holding onto her. And meanwhile, there was blood all over this man’s hands. He was tending to her,” Martinez told CNN, who was sitting a row or two away from the woman.

Other passengers began trying to plug the hole with jackets and other objects but to no avail. Those items, too, were sucked out of the plane, he said.

Martinez said he didn’t think he would survive. Nor did his colleague in an adjacent seat who was scrambling to write one last message to his wife and unborn son, he said.

“We could feel the air from the outside coming in, and then we had smoke kind of coming in the window. Meanwhile, you have passengers that were in that aisle, trying to attend to the woman that was bleeding from the window explosion,” he said. “That was just chaos all around.”

The plane descended precipitously, Johnson said, but the pilot regained control and informed passengers the flight was headed to Philadelphia.

It was a rough landing, Martinez said, and things were still so chaotic that he wasn’t sure if the plane was going to crash. The jet could have been landing on a freeway for all he knew, he said.

“I didn’t know if we were going to be running into a building. I didn’t know what state the plane or even the pilot was in, if we were in condition to land,” he said. “It was just all incredibly traumatic, and finally when we … came to a halt, of course, the entire crowd was (in) tears and people crying and we were just thankful to be alive.”

Video from the scene showed the plane on the tarmac surrounded by emergency vehicles. The engine on the left wing was badly damaged.