Historic SLC mural becoming piece of the past 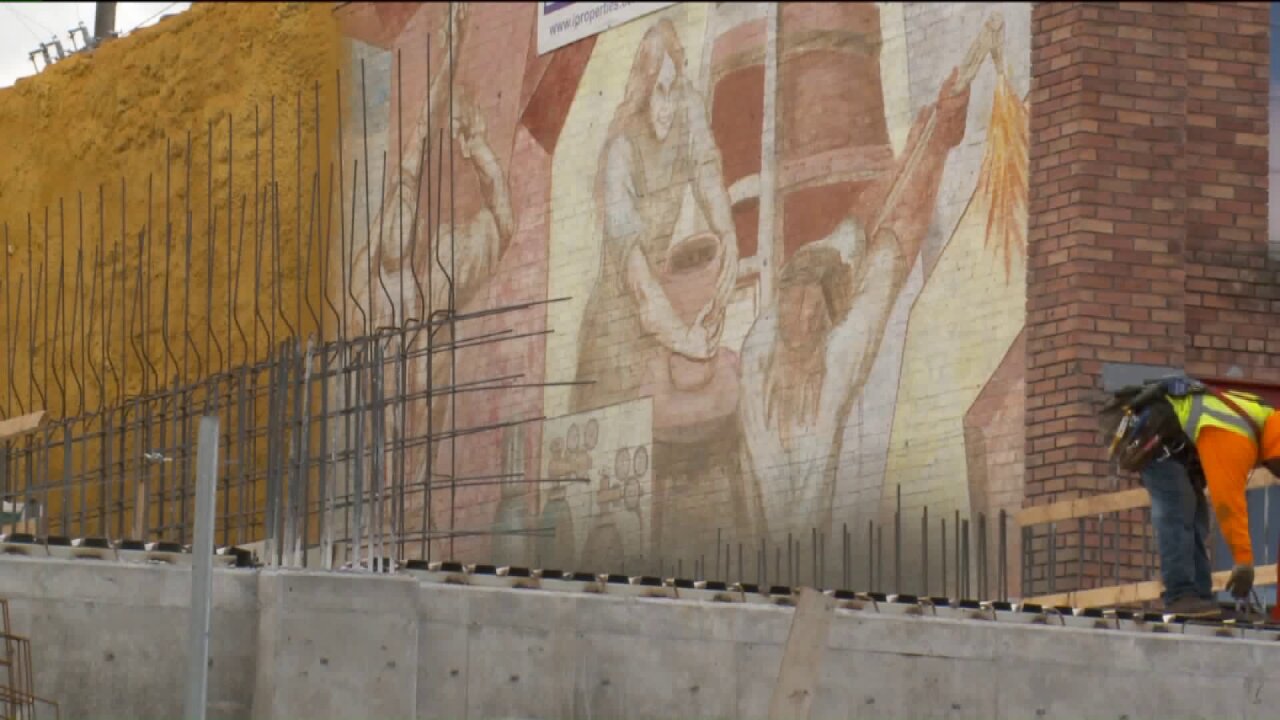 SALT LAKE CITY, Utah—Residents and visitors alike have gazed upon a historic mural since the '80s, but now an eight-story apartment complex will have it completely covered in a matter of weeks.

Murals can be seen scattered across buildings throughout Salt Lake City.

“The mural is really like dressing the cities, it’s making it have a character,” said local artist and muralist Jann Haworth while standing in-front of a mural she contributed to.

“It’s a way of expressing a rather vast amount of ideas,” she added.

But pretty soon, a historic mural on the side of the original Eccles Warehouse building on 325 West Pierpont Avenue will be a thing of the past.

The mural came to be in 1986. The project was spearheaded by a man named John Williams, a well-known restaurateur in town.

“He recognized the changes that were coming to the neighborhood. He wanted to announce those with the idea that artists were city builders,” said Stephen Goldsmith, the director of the Center for the Living City.

Williams was on the board of trustees for a non-profit, founded by Goldsmith, called Artspace. Artspace was founded in 1980 and focuses on developing affordable housing for other non-profits and small businesses.

“So [Williams] did a national competition to find an artist who would actually represent this idea as artists as city builders,” Goldsmith added.

The search was seen by an anthropologist at Berkeley, whom the soon to be selected artist was working with, according to Goldsmith.

“The artist was a gentlemen named Peruko Ccopacatty, he was a Peruvian artist, he was about this tall,” said Goldsmith using his hand to show a small amount of space between his index finger and thumb.

“[Peruko] spent 30 days or so climbing scaffolds to paint this mural,” he added.

But those 30 days did not come without challenges.

“Before it was Caputos and before it was a restaurant, it really was a Firestone store and there was barbed wire around the area where this mural was placed,” Goldsmith said.

“There was a lot of racism around this because Peruko, who looked Native American, was kept from having a key to the gate," Goldsmith said. "So when he went in to get onto the scaffold, he had to climb onto the barbed wire every day."

Now, 32 years later, the mural remains a tribute to artists and their impact on Salt Lake.

“The artists have been such a big part of the transformation of this neighborhood, and he wanted to celebrate this idea of artists as city builders,” Goldsmith said.

Setting the stage for future muralists and artist like Jann Haworth.

“It has a historical place in the city because it’s been there for so long, in a way it pre-dates all of the things that have come after,” Haworth said.

While the years have faded the mural, pretty soon you won’t be able to see it at all, thanks to a high-rise apartment complex, which is currently under construction.

“There is a sentimental way of looking at a transformation of a city that makes some people very sad," Goldsmith said. “I think we have to understand that cities are always changing. That what may be sad one day could be joyful another day,” he added.

Since the mural was not commissioned by Salt Lake City, there is nothing they can do to prevent it from being covered.

However, according to Goldsmith, art is so much more than paint.