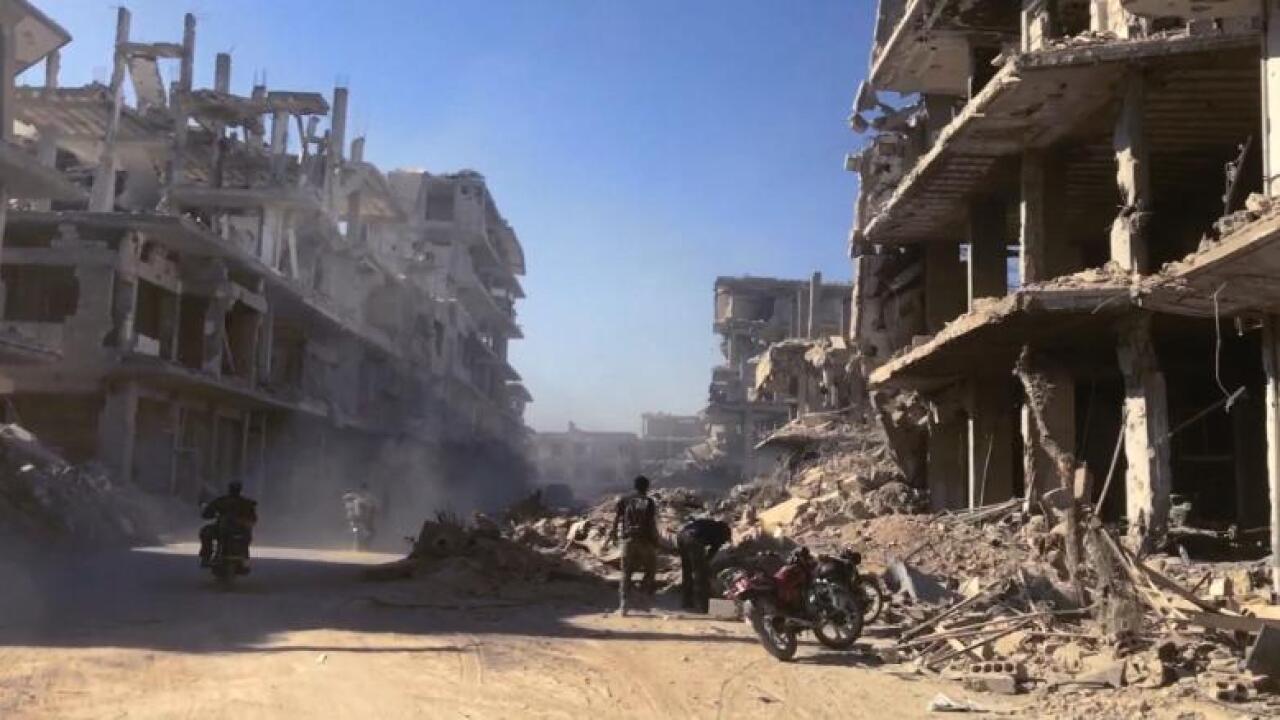 Several Syrian activist groups Saturday reported that a brutal attack on the remnants of the rebel-held city of Douma in Eastern Ghouta left dozens of civilians dead and scores wounded.

The groups — including the White Helmets, the Douma Coordination Committee and the Ghouta Media Center — said toxic gas inside barrel bombs dropped by helicopters over Douma caused people to suffocate and choke.

Syrian state news agency SANA cited an “official source” who denied the allegations, saying the reports were a “blatant attempt to hinder the army’s advance” into what the news agency described as a “collapsing terrorist” stronghold.

SANA, citing the same sources, wrote that the Syrian Arab Army “does not need to use any chemical materials as claimed by terrorists’ media affiliates.”

Graphic images showed people, including children, apparently dead and injured — some with some kind of spittle or foam in their mouths in makeshift medical centers.

An official with the Union of Medical Care and Relief Organizations (UOSSM) told CNN that doctors in eastern Ghouta have told him they were seeing patients who were convulsing from side to side and some appeared to be paralyzed and unresponsive.

Many of the people had been staying in underground shelters.

CNN could not immediately confirm the authenticity of the images.

The UOSSM, citing doctors and activists on the ground, released a statement saying a massive suspected chemical or gas attack was reported and at least 25 people were killed and 500 wounded.

CNN’s Frederik Pleitgen in Damascus said there were heavy air strikes in the area all day and rebels shelled the Syrian capital.

Meanwhile, a US State Department official told CNN, “We have seen multiple, very disturbing reports this afternoon regarding another possible CW (chemical weapons) attack near a hospital in Douma, Syria.”

The official also said, “The regime’s history of using chemical weapons against its own people (is) not in dispute, and in fact began with a sarin gas attack in Eastern Ghouta on August 21, 2013 which killed over 1,000 Syrians.

“As we’ve said, Russia ultimately bears responsibility for the brutal targeting of countless Syrians with chemical weapons. Russia’s protection of the Assad regime and failure to stop the use of chemical weapons in Syria calls into question its commitment to resolving the overall crisis.”

A later statement from State Department spokeswoman Heather Nauert said the US continued to “closely follow disturbing reports” of the alleged attack.

“Reports from a number of contacts and medical personnel on the ground indicate a potentially high number of casualties, including among families hiding in shelters. These reports, if confirmed, are horrifying and demand an immediate response by the international community,” Nauert said.

“The United States continues to use all efforts available to hold those who use chemical weapons, in Syria and otherwise, accountable. The regime’s history of using chemical weapons against its own people is not in dispute, and in fact nearly one year ago on April 4, 2017, Assad’s forces conducted a sarin gas attack on Khan Sheikhoun, which killed approximately 100 Syrians,” she added.

In April 2017, more than 80 people were killed in a sarin attack on the rebel-held town of Khan Sheikhoun — an attack that prompted the United States to launch 59 Tomahawk cruise missiles at a Syrian airbase.

A joint report from the United Nations and international chemical weapons inspectors last October determined the Syrian regime of Bashar al-Assad was responsible for the attack.

Syria has repeatedly denied it had anything to do with the attack and denies it has any chemical weapons. Damascus has said an airstrike hit a chemical weapons depot in the rebel-held area.