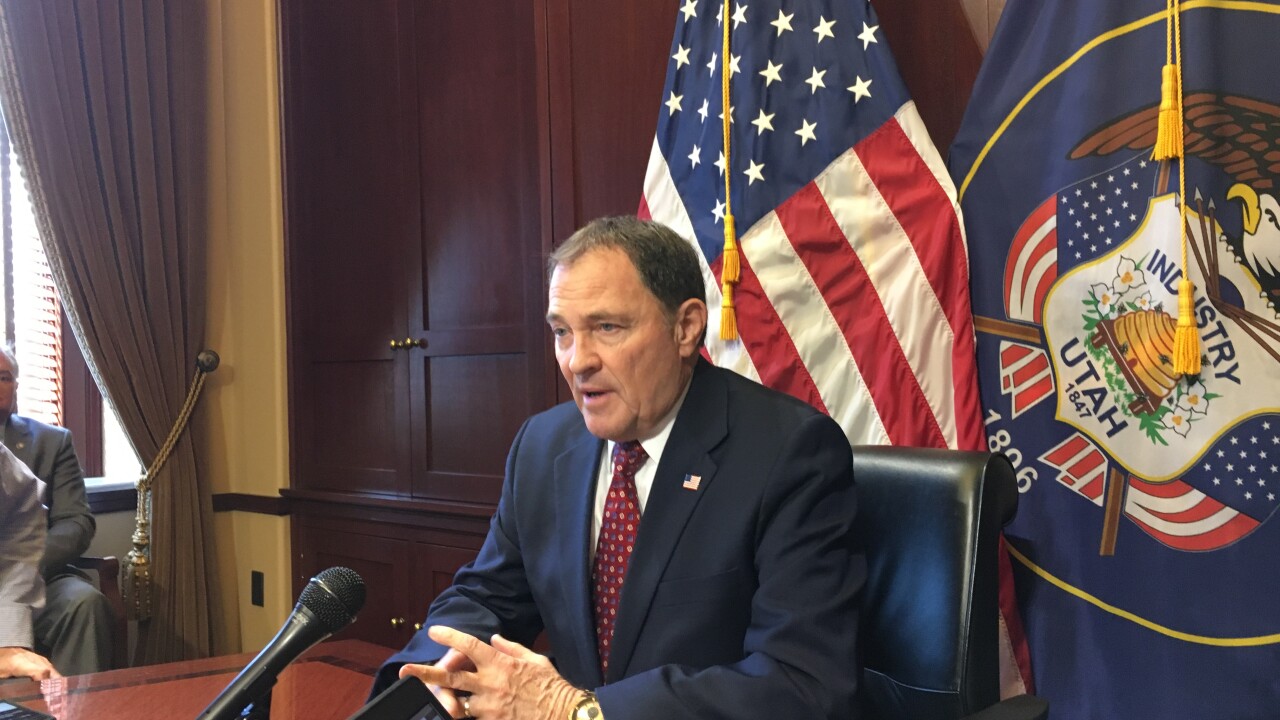 Governor Gary Herbert speaks to reporters about a potential deal with Our Schools Now. (Photo by Ben Winslow, FOX 13 News)

SALT LAKE CITY -- Governor Gary Herbert has announced he will actively oppose the medical marijuana ballot initiative expected to be before voters in November.

In a statement released Thursday, Utah's governor praised the legislature for passing House Bill 197, orders the Utah Department of Agriculture and Food to grow marijuana for terminally ill patients. A companion bill granted people with less than six months to live a "right to try" cannabis.

"I fully support the science-supported use of substances that, under medical supervision, can improve lives. Consequently, I support efforts to allow medical researchers to better understand the medical properties of cannabis. That, in turn, will allow physicians and pharmacists to prescribe and dispense cannabis as a controlled substance in accordance to the highest standards of medical science," the governor wrote.

Turning to the initiative, however, the governor said it has "significant flaws."

"It lacks important safeguards regarding its production and utilization and would potentially open the door to recreational use," he said. "We need to be cautious as we test and introduce cannabis into our formulary. I believe the consequences of this initiative, even if they are unintended, will do more harm than good."

The governor ended his statement saying he will actively oppose the medical marijuana ballot initiative. (Read his full statement below).

The Utah Patients Coalition, which is gathering signatures to get on the November ballot, criticized the governor.

"While we appreciate the Governor weighing in on medical cannabis, his comments are another example of what Utahns have grown tired of: politicians standing between patients and their physicians," said DJ Schanz, the group's director.

"Saying the most conservatively drafted initiative in the entire country would 'potentially' open the door for recreational use is a scare tactic that has no basis in truth. Neither the Legislature nor the Governor should undermine the clear will of voters as demonstrated in over a dozen public polls. Utahns are ready to vote on this and set aside the misguided positions of elected officials who are apparently comfortable with criminalizing sick and suffering Utahns."

"It’s surprising that a governor who prides himself on being so close to the people is ignoring the will of three-quarters of the state who are in favor of medical cannabis managed by a doctor," said Christine Stenquist of the group Together for Responsible Use and Cannabis Education (TRUCE), which has lobbied the legislature for a more comprehensive medical marijuana policy.

"We have the support of the people. We have the signatures for the ballot. And come November, we are going to see that Utahns are fed up with platitudes and insulting half-measures from weak-kneed politicians who have shown nothing but apathy for those who suffer," she wrote in an email.

On Monday, FOX 13 asked the governor about a UtahPolicy.com poll that found 77% of Utahns supported medical marijuana.

"I do believe that people support marijuana use for medicinal purposes. I’d support it, too. I just want to have science behind it making sure we understand it does do something good. Not just an anecdotal," the governor said.

Asked if he would vote for the initiative, Gov. Herbert replied: "You’ve got to read the initiative, it’s not just do you support marijuana for medicinal purposes. The devil’s in the details as we say."

The Utah Patients Coalition said it has approximately 160,000 signatures collected statewide, more than enough to qualify for the November ballot. Those signatures are being validated by county clerks and the Lt. Governor's Office.