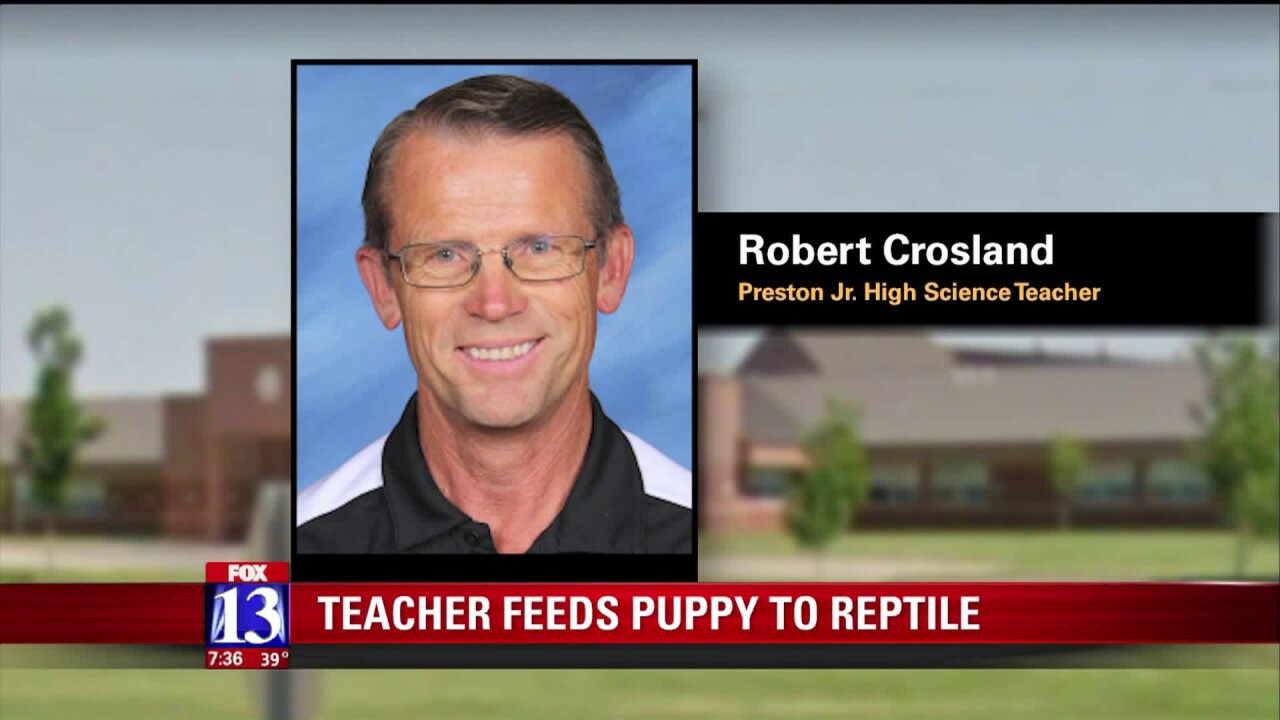 Deputies say a science teacher, Robert Crosland, fed a live puppy to one of his reptiles in front of students.

Local animal activist, Jill Parrish, is the one who filed the police report.

“What I have learned in the last four days is disgusting. It is sick. It is sick,” said Parrish.

Parrish says a teacher told her that last week after school, Mr. Crosland fed a live puppy, who was reportedly sick, to one of his reptiles. He has a snake and a snapping turtle. Apparently, it all happened in front of students.

“Allowing children to watch an innocent baby puppy scream because it is being fed to an animal. That is violence. That is not okay,” says Parrish.

Franklin County Sheriff, David Fryar, says the department is looking into it.

“We’re investigating the facts and turning it over to the prosecutor. He’s the one who will determine if the law has been broken,” says Fryar.

Preston School District Superintendent, Mark Gee, says Mr. Crossland is still employed at Preston Junior High and while the incident is under investigation, he’s not been placed on administrative leave.

Even if the puppy was going to die, Parrish doesn’t think this was the way to do it.

“There’s a lot of humane things you can do. Feeding a live animal to a reptile is not humane and it’s not okay,” said Parrish.

However, other parents say it’s just a hands-on way to teach the circle of life.

“If you’re not fine with it, leave the room,” says Salvesen.

On March 7, 2018 Preston School District was made aware of a regrettable circumstance involving some of the biological specimens at Preston Jr. High.  The event occurred well after students had been dismissed and was not a part of any school directed program.  We emphasize that at no time was the safety of students or staff compromised.

District administration was made aware of the issue soon after it occurred and immediately began the process of investigation and taking steps to ensure that this type of action could not be repeated.  A part of any investigation includes determining the best course of action once the facts of the matter have been ascertained. This is not a situation that is easy, nor do we feel it is a measure that can be taken lightly. As such we ask for patience while appropriate measures are determined and carried out.

Additional details cannot be shared at this time as the local law enforcement agency is in the process of gathering information.

While the district certainly does not condone individual actions that may violate district policy or reasonable expectations of behavior, we hope that any errors in judgement made by a teacher in this instance will not cause us to forget the years of care, effort, and passion the teacher has given to students in Preston School District.