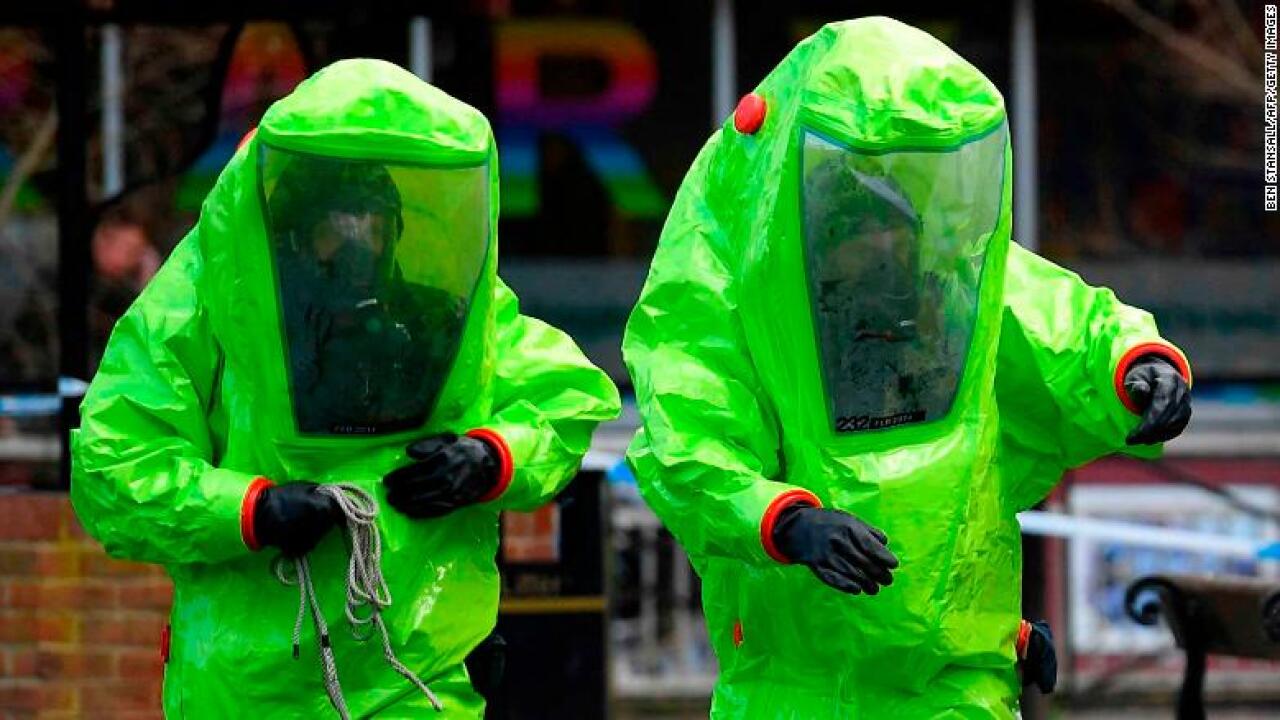 Members of the emergency services in green biohazard suits work to afix the tent over the bench where a man and a woman were found on March 4 in critical condition at The Maltings shopping centre in Salisbury, southern England, on March 8, 2018 after the tent became detached. British detectives on March 8 scrambled to find the source of the nerve agent used in the “brazen and reckless” attempted murder of a Russian former double-agent and his daughter. Sergei […]

ENGLAND – Customers at a restaurant and pub in Salisbury, southern England, were urged to wash their clothes Sunday after traces of the nerve agent used on a former Russian spy and his daughter were detected.

Customers who visited Italian restaurant Zizzi or The Mill pub from 1:30 p.m. March 4 to the evening of March 5 were advised to clean their clothes and any possessions they had with them at the time.

“We have now learned that there has been some trace contamination by the nerve agent in both The Mill pub and Zizzi restaurant in Salisbury,” England’s chief medical officer, Sally Davies, told reporters Sunday.

Davies said she was confident “this has not harmed the health of anyone” who was there. However, she advised people who visited the locations to wash their clothes and belongings as a precaution.

The father and daughter, believed by authorities to have been deliberately targeted, were found slumped on a bench near a shopping center on Sunday afternoon.

The restaurant and pub remain cordoned off, along with the bench where the two were found, a parking lot, Skripal’s home, and the graves of his wife, Lyudmila, and son, Alexander.

Some 180 military personnel were deployed on Saturday to the normally quiet cathedral city of Salisbury to help police investigate several sites amid concerns over potential contamination.

Authorities said 21 people received medical attention in the aftermath of the attack.

Police have identified more than 200 witnesses and 240 pieces of evidence in the attempted killing, Rudd said after an emergency Cabinet-level meeting on Saturday.

Police previously said they know what nerve agent was used in the attack, but have declined to name it or how they suspect it was administered.

Identifying the source of the nerve agent continues to be central to the investigation, but Rudd has so far declined to name any potential culprits.

If a Moscow link were proved, it would plunge relations between the West and Russia to a new low.

On Friday, Russian Foreign Ministry Sergey Lavrov dismissed allegations of Russian involvement as propaganda. He said Russia was ready to assist any investigation but that it was “not necessary to hurl unfounded accusations on TV.”

Last week, a spokesman for the Russian Embassy in London described comments by UK Foreign Secretary Boris Johnson, who vowed a “robust response” in the event that state involvement was proved, as “strongly anti-Russian.” The spokesman said Johnson’s comments were an attempt to politicize the affair, and he attacked the media for aiding the UK government’s efforts.

Johnson had said the case had “echoes” of what happened to former Russian spy Alexander Litvinenko, who died a slow death after drinking tea laced with highly radioactive polonium-210 in a London hotel in 2006.

Who was Sergei Skripal?

In 2006, Sergei Skripal was sentenced to 13 years in prison for spying for Britain, according to Russian state media accounts of the closed hearing.

Russian court officials at the time said he’d received at least $100,000 for his work for MI6, the British intelligence service. He was granted refuge in the UK after a high-profile spy exchange between the United States and Russia in 2010.

His daughter Yulia is thought to be one of the few members of his immediate family still alive after his wife and son died in recent years. She was visiting him from Russia at the time of the incident.