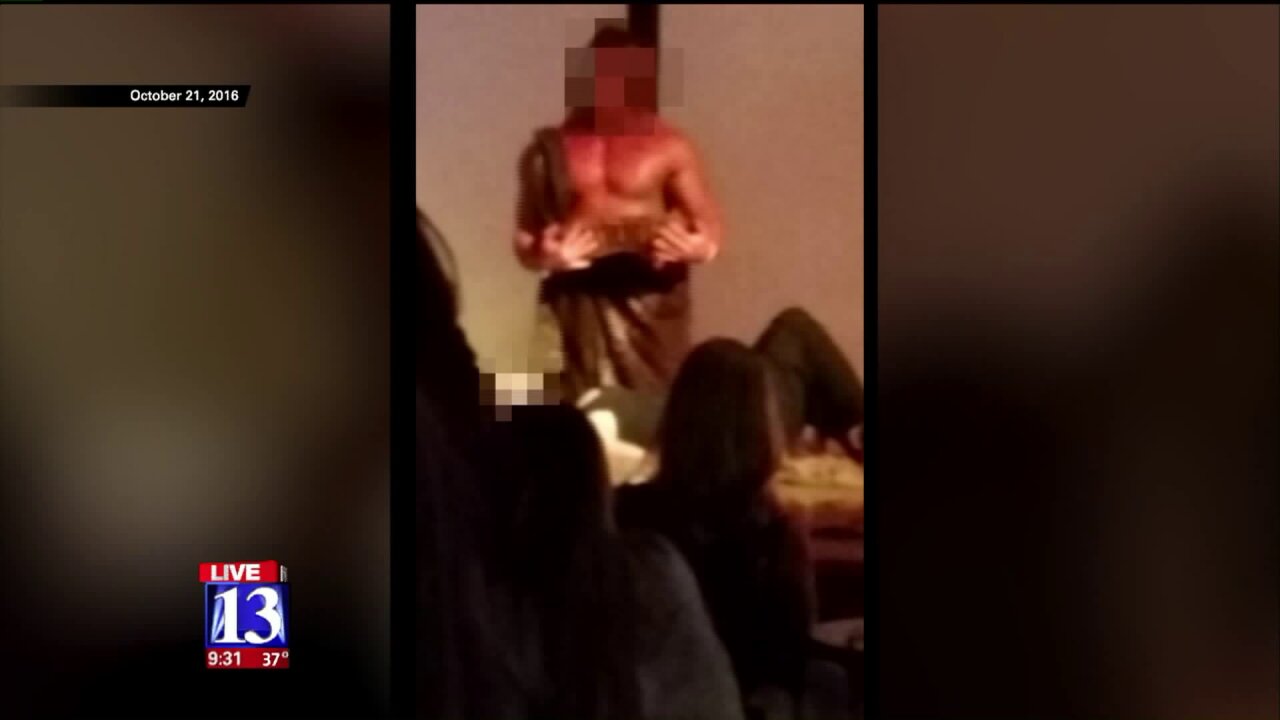 SALT LAKE CITY -- Utah bars are warning each other about booking male stripper troupes for fear of losing their liquor licenses.

The traveling shows come through the state, breaking strict Utah liquor laws on live performances with nudity or sexual conduct. But when the Department of Alcoholic Beverage Control hands down a fine or licensing action, the strippers are long gone.

"I’m like, 'You know we’ve got some laws here,' and they’re like, 'Yeah, we do shows all over Utah all the time,'" said Dave Morris, one of the owners of Murray's Ice Haus bar, who got hit with a $10,000 fine and suspension of a liquor license for an incident involving a show.

A screen shot from an undercover video showing a male stripper show at the Ice Haus bar. (Image provided to FOX 13)

An undercover officer for the State Bureau of Investigation was in the audience for an October 2016 show at the Ice Haus. The video, obtained by FOX 13 under a public records request, shows a dancer on stage with a woman plucked out of the audience. She's lying on the ground and he grabs her breasts, then pulls out a sex toy and hands it to her while he sprays the audience with a squirt bottle. The audience screams as Enigma's "Sadeness" blares.

The performance also included a series of violations involving live shows under Utah liquor laws, said Terry Wood, a spokesman for the DABC.

The rules are regularly enforced at Utah strip clubs (which don't even allow for full nudity if the facility wants to serve liquor). Strippers can also face sanctions because they're employees of the bar. Morris said he booked "Girls Night Out: The Show" putting them on notice about the law. When the violations occurred, Morris said he was brushed off by the show's organizers.

"This is gonna cost me, you know, 10 grand and a closure and they said, 'Sorry, they’re private contractors so we have no control over them and we’re not liable for them,'" he said.

Organizers of "Girls Night Out: The Show" did not return emails seeking comment. The DABC said it takes action against the one that holds the liquor license.

"It is the licensee that’s liable for anything that takes place in the establishment or on the premises that’s a violation of Utah law," Wood said.

Numerous bars have reported finding themselves under investigation for the shows, Morris said. His case was finally adjudicated at the end of 2017 with a fine and limited closure.

Morris said he believes the dancers should have been cited, especially with police apparently sitting in the audience watching a violation occur. The Salt Lake Area Restaurant Association sent out an email blast to its members warning them against booking the "rogue male stripper troupes."

"The licensees have no idea what’s going on. They’re being told that it’s just a normal party, nothing’s going to happen and they come out and do these male stripteases," said SLARA Executive Director Michele Corigliano.

Morris said he's started tracking when the shows come through town and calling his fellow bar owners to warn them against booking them.

"My message to licensees is, if you get contacted by one of these guys don’t do it," he said. "They’re bad dudes, they’ll take advantage of your business and put you at risk."