Surgical sponges left inside woman for at least 6 years 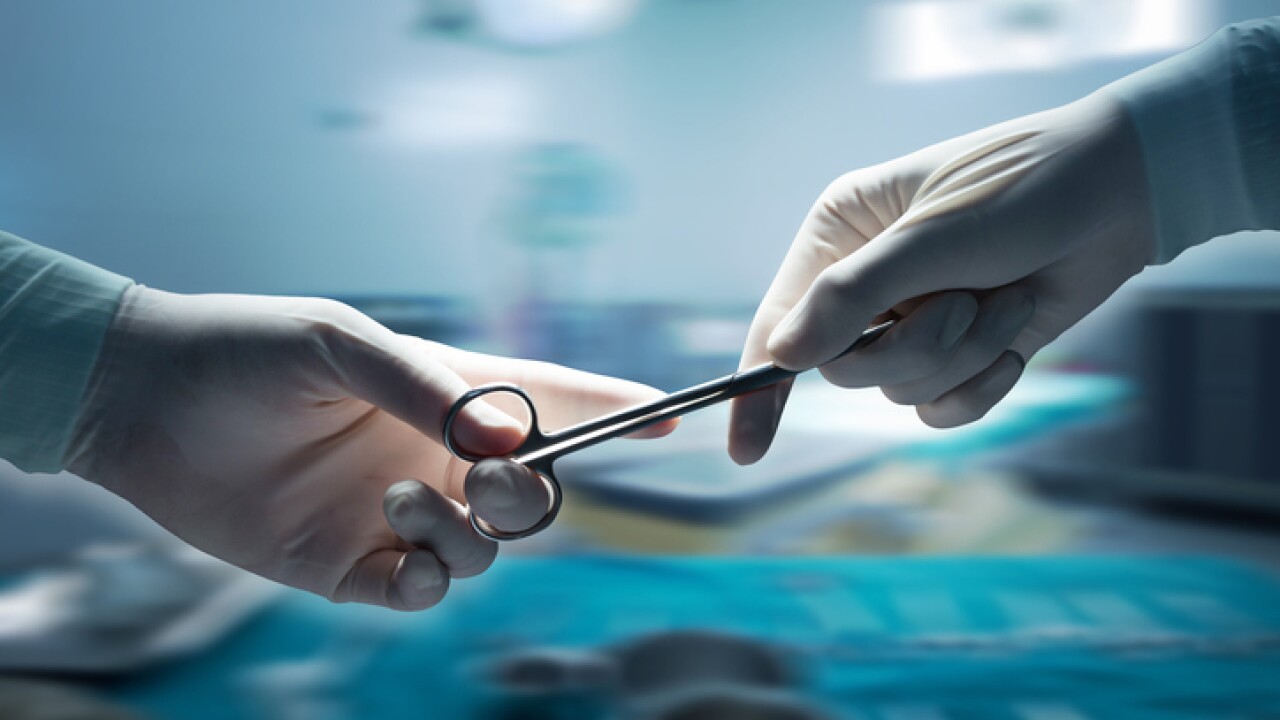 Two surgical sponges were left in a woman’s abdomen for at least six years, according to a new report in the New England Journal of Medicine.

The unidentified 42-year-old went to a primary care clinic in Japan, saying she had experienced bloating for three years, according to the report, published Wednesday.

A CT scan of her abdomen showed two masses with strings attached to them. A surgical procedure called a laparotomy confirmed the presence of two gauze sponges that had become attached to the patient’s omentum — a fold of tissue that connects the stomach with other abdominal structures — and colon.

The authors concluded that the sponges were probably left after a cesarean section. The woman had had two cesarean sections — one six years earlier and one nine years earlier — but it is unclear which one resulted in the retained items. She did not have any other abdominal or pelvic surgeries, according Dr. Takeshi Kondo, a general medicine physician at Chiba University Hospital and a lead author of the report.

“The patient received two C-sections in the same gynecologic clinic,” Kondo said. “Although she met the surgeon and told him (about) the retained foreign bodies, the surgeon did not admit his mistake on the grounds of lack of clear proof.”

After the removal of the sponges, the patient’s symptoms resolved, and she was discharged five days later.

Many — but not all — Japanese hospitals and clinics perform imaging of the abdomen before closing a surgical wound to ensure that no items are left inside the patient, Kondo said.

In the United States, about a dozen sponges and other surgical instruments are left inside patients’ bodies every day, resulting in around 4,500 to 6,000 cases per year, according to the American Society of Anesthesiologists. There is no federal reporting requirement for retained or forgotten items, making a precise count difficult.

Approximately 70% of the items left in patients’ bodies are sponges, according to a 2003 study in the New England Journal of Medicine. The remaining 30% are surgical instruments such as clamps and retractors.

Otherwise known as retained surgical items, these objects can cause localized pain, discomfort and bloating. In some cases, they can lead to sepsis or death.

“In two-thirds of these cases, there were serious consequences, whether that’s infection or even death,” said Dr. Atul Gawande, a practicing surgeon at Brigham and Women’s Hospital and director of Ariadne Labs in Boston. “In one case, a small sponge was left inside the brain of a patient that we studied, and the patient ended up having an infection and ultimately died.”

The mistakes are considered so egregious that they are often referred to as “never events,” a category of surgical errors that includes operating on the wrong site or on the wrong patient.

To reduce the number of “never events” in the United States, the Joint Commission — a nonprofit that accredits more than 21,000 health care organizations and programs in the country — published the Universal Protocol in 2004, outlining steps that should be taken to reduce human error in the operating room.

“The Universal Protocol is designed to address the risks of the wrong patient, the wrong site, the wrong procedure, the wrong equipment — all of that information is vetted and validated with all members of the surgical team including the anesthesiologist and the nurses at the table with the surgeon,” said Dr. Ana McKee, executive vice president and chief medical officer of the Joint Commission.

“The sponges are part of a process that occurs where there’s verification that not only sponges but all instruments that are used are accounted for at the end of the procedure,” McKee added.

“There’s a known rate of human error, and actually it’s pretty impressive that we have it as low as we do,” he added. “What we found doing research on 60 of these cases is that the team virtually always has followed the protocol correctly, and yet it still occurs.”

Distractions during surgery can serve as one source of human error, McKee said.

“If there’s music going on or side conversations or someone is on the phone, that does not meet the spirit of the Universal Protocol,” she said.

Retained surgical items are much more common after an emergency surgery or an unplanned change in operation, according to Gawande.

“In high-stress circumstances like emergency situations or in a case where there’s an unexpected change in the procedure, you have a ninefold, or a 900%, increase in risk that this kind of case will occur,” he added.

According to Gawande, it is not unusual to use 50 or 100 sponges in a major operation.

“And if you’ve ever counted a deck of cards and tried to confirm whether you have 52 cards, you know that you will miscount a known number of times,” he said.

To reduce the number of items retained after surgery, some hospitals have switched to automated counting using special sponges or towels with individual bar codes on them.

“Some organizations have relied on technology to help them, so they use radiofrequency-sensitive material that can be accounted for at the end of the procedure,” McKee said. “Oftentimes, the organizations have a policy that if there is any question of the count, automatically they perform an X-ray while the patient is still on the table and before closure.”

At Brigham and Women’s Hospital, surgical teams use these sponges to help track items during and after surgery.

SurgiCount, one of the main manufacturers of these sponges, reports that its products have been used in over 11 million procedures nationwide without any retained items.

According to Gawande, less than 20% of operations in the country use the new technology, which was introduced in 2009.

But we may see an increased use of the technology in the coming years, he said. “Investing in these technologies actually overall saves money,” Gawande added. “But people are still very slow to move it along.”