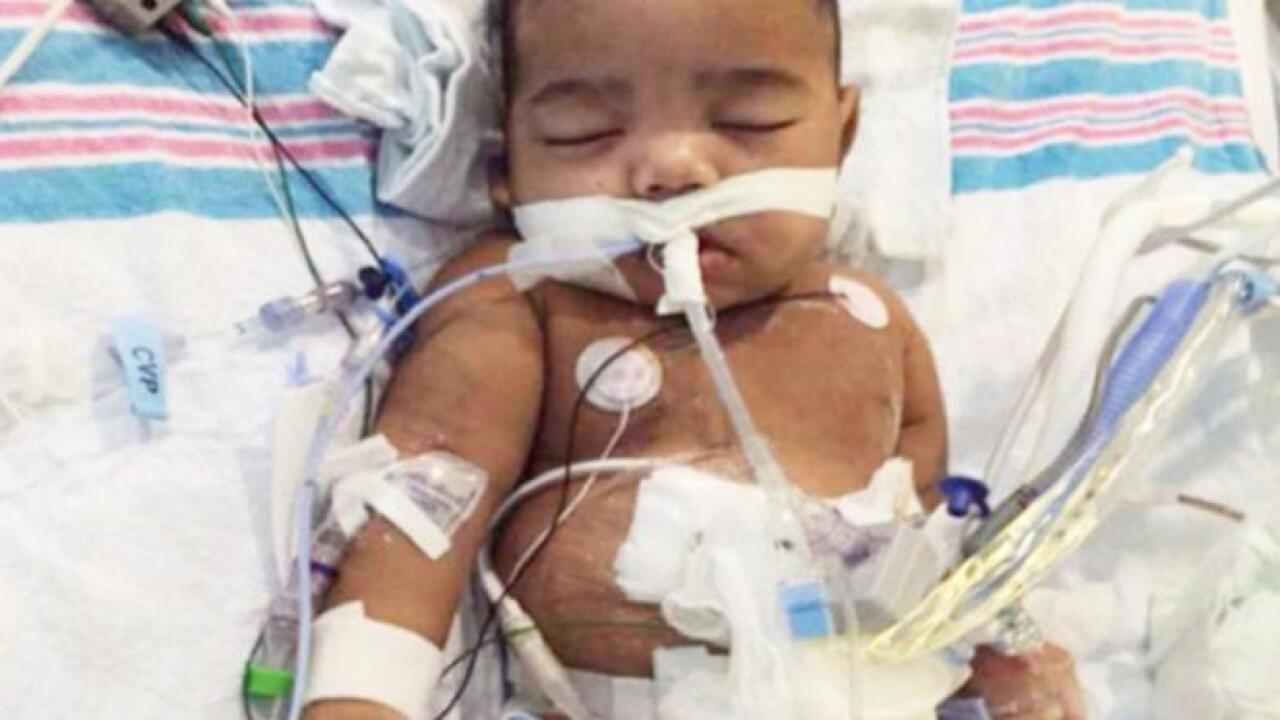 Emory Healthcare in Atlanta is moving toward a resolution with a family whose child is in need of a kidney transplant. The hospital drew the ire of activists when it delayed the operation after the father, the organ donor, was arrested several days before the surgery.

Two-year-old AJ Burgess, who was born without working kidneys, according to a family attorney, has been called a “miracle child.”

He weighs only 25 pounds, according to CNN affiliate WGCL, and has required constant medical attention.

“He’s my pride and joy, my sunshine,” said AJ’s mother, Carmellia Burgess, on HLN. “He’s made me humble.”

But little AJ is in need of a kidney transplant, according to his parents.

“I love him,” Burgess said tearfully. “And I guess I just hate to see him going through this.”

His father, Anthony Dickerson, was found to be a perfect match and volunteered to donate one of his kidneys after complying with an extensive evaluation required for living donors, according to the family’s attorney, Mawuli Davis.

Emory Healthcare in Atlanta was set to remove Dickerson’s kidney on October 3, according to Davis, and soon after, AJ would undergo the transplant at Children’s Healthcare of Atlanta at Egleston.

But on September 28, Dickerson was arrested for a parole violation, Davis told CNN, for allegedly being in possession of a firearm while fleeing and eluding police. After five days, Dickerson was released, and all set to undergo surgery the next day.

The surgery didn’t go as planned.

“On October the 3rd, when they arrived, they were informed they would not be able to do the transplant,” said Davis. It wasn’t until the next day the family was told that because Dickerson had been arrested, he would need to provide the hospital with proof of complying with his parole for 90 days — effectively postponing AJ’s transplant until January.

“At that time, they could not believe what they were hearing,” Davis said.

Initially, Emory Healthcare wouldn’t elaborate to media on Dickerson’s situation, saying “guidelines for organ transplantation are designed to maximize the chance of success for organ recipients and minimize risk for living donors. Transplant decisions regarding donors are made based on many medical, social, and psychological factors,” WGCL reported.

After meeting Thursday with the family, Emory Healthcare apologized for a breakdown in communication. It said is meeting with the family on Monday to discuss to further review the matter.

In a statement sent to CNN on Saturday, Dr. Jonathan Lewin, CEO of Emory Healthcare, said the “entire Emory community is motivated and engaged to help him [AJ] secure a healthy future.”

“We greatly respect the father’s desire to become a donor, and we want to work with him to try and make this happen,” Lewin said. “The national guidelines for approving a potential organ donor are clear and stringent. When evaluating any potential donor, Emory’s medical team is required to consider the ability of the donor to manage the many complications and health challenges that come with a major surgical procedure.”

According to Davis, Emory’s justification for denying the transplant was that the hospital wanted to be sure Dickerson would be in a position after the procedure to adhere to the after-care requirements for living donors.

“Everybody understands that,” Davis told CNN, “but nobody can make any guarantee about what happens to a donor when a donation is made.”

Davis added, “His parole probation status should not, as far as we’re concerned, be a factor at all.”

“I don’t see why they think it would be a problem for me to try to treat myself after I do the transplant,” Dickerson said on HLN, adding that he would do everything the hospital required.

Emory had previously concluded Dickerson “would comply with any and all after-care requirements,” according to Harold Spence, another family attorney.

Davis says the hospital did not effectively communicate with the family for nearly a month.

But Emory appeared to be open to moving forward this week, Davis said, after activists from Emory’s Candler School of Theology began protesting the hospital’s decision and demanded a meeting with officials on Thursday.

One of the activists contacted the attorneys and had them bring the family to the meeting, which was “the first communication of any kind,” Davis said. “We were unable to get a sit-down meeting with Emory until the tactics used by these activists yesterday.”

On Friday, Davis called the meeting the “first positive step forward,” but said there was still a long road ahead.

AJ’s parents expressed thanks for support.

“I just want to thank the community,” Burgess said. “If it wasn’t for y’all, we wouldn’t be closer to the transplant, so thank you.”

The 2-year-old is currently fighting an infection at Children’s Healthcare and underwent surgery on Friday to change the way AJ received dialysis.

“We have said from the very beginning that this is a difficult situation,” Davis said. “But what this mother knows and what we all know was that this child is a miracle child.”