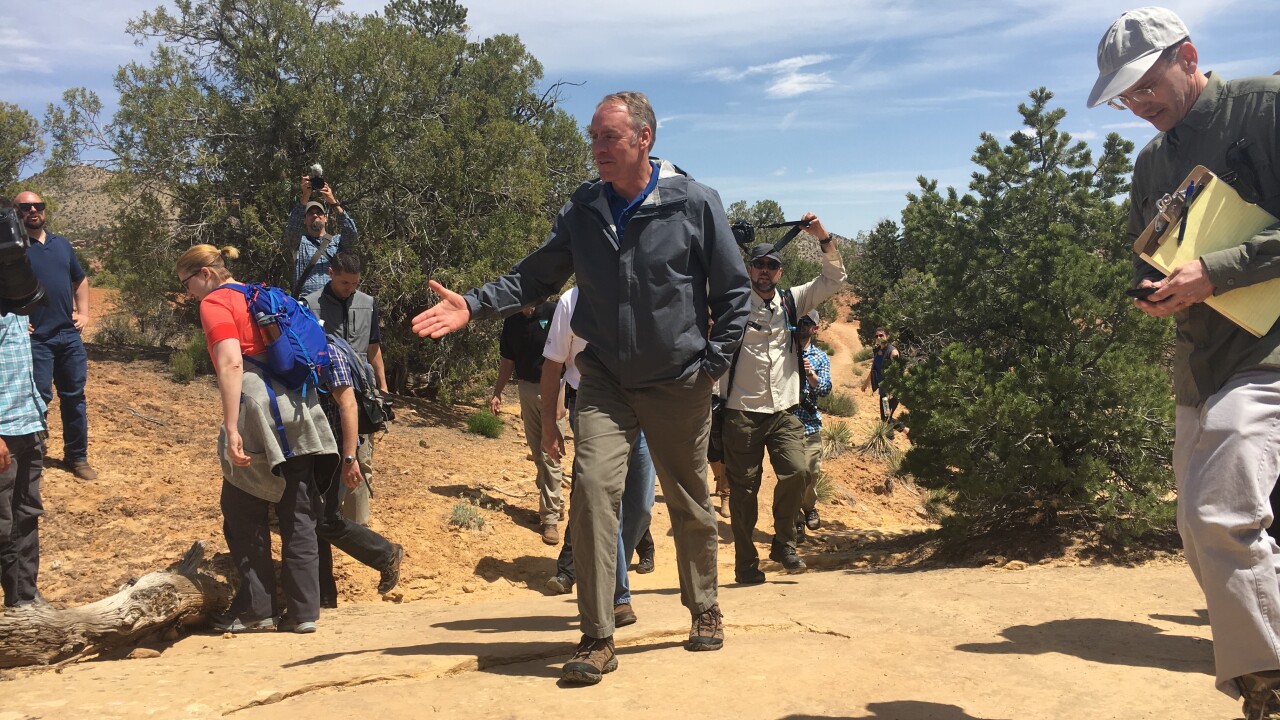 SALT LAKE CITY -- Interior Secretary Ryan Zinke has completed his review of national monuments, recommending to the White House that none of them be eliminated.

"No President should use the authority under the Antiquities Act to restrict public access, prevent hunting and fishing, burden private land, or eliminate traditional land uses, unless such action is needed to protect the object," Zinke said in a statement released through the Department of Interior on Thursday.

"The recommendations I sent to the president on national monuments will maintain federal ownership of all federal land and protect the land under federal environmental regulations, and also provide a much needed change for the local communities who border and rely on these lands for hunting and fishing, economic development, traditional uses, and recreation."

In comments to the Associated Press, Zinke said he would recommend some be "downsized." He previously recommended the newly created Bears Ears National Monument in southeastern Utah be shrunk.

Local politicians told FOX 13 they expected Grand Staircase-Escalante National Monument in southern Utah will be reduced in size as well. The Utah State Legislature passed a resolution earlier this year calling on the president to rescind both monuments.

The Bears Ears National Monument, seen from the air. The environmental group Eco-Flight took FOX 13 on a flight around the controversial national monument on Monday, May 8, 2017. (Photo by Ben Winslow, FOX 13 News)

Rep. Mike Noel, R-Kanab, whose district encompasses both monuments, told FOX 13 he can live with shrinking them.

"I definitely can. In terms of Grand Staircase, there are beautiful things to see out there," Rep. Noel said. "Bears Ears, I think I can, I think my constituents, I think the county commission can live with it depending on the size of it."

Zinke has spent months reviewing monuments since President Trump ordered a review of the Antiquities Act, dating back to the creation of Grand Staircase-Escalante National Monument in 1996.

"I appreciate Secretary Zinke’s thorough and thoughtful review, and the efforts he made to ensure relevant stakeholders, particularly those in San Juan, Kane, and Garfield Counties, had an opportunity to be heard," he said in a statement.

Zinke's recommendation that no monuments be eliminated did not calm environmental groups, who have been outspoken in their opposition to a review. Some have threatened litigation, regardless of what the Interior Secretary recommended and what Trump does.

"President Trump can avoid another political and legal debacle by releasing Secretary Zinke’s full recommendations, then quickly and publicly putting the report where it belongs: in the trash can," said Jennifer Rokala of the Center for Western Priorities in a prepared statement.

Tribal groups, which backed President Obama's creation of Bears Ears National Monument, have also urged Zinke to preserve it as is.

"Bears Ears is a very special place to the five tribes who petitioned the president for its establishment. It continues to hold those sacred places, the sacred sites with cultural resources," said Nizhone Mesa, the legal director for Utah Dine Bikeyah, a coalition of tribal groups seeking to preserve the monument.

She said the tribes surrounding the new monument originally asked President Obama for 1.9 million acres, instead of the 1.3 million that it is now.

"There is still cause for concern that any reduction in boundaries would eliminate protections for that area, and protections the local communities worked hard for," Mesa said.

Read a summary of the Interior Secretary's report to President Trump here: