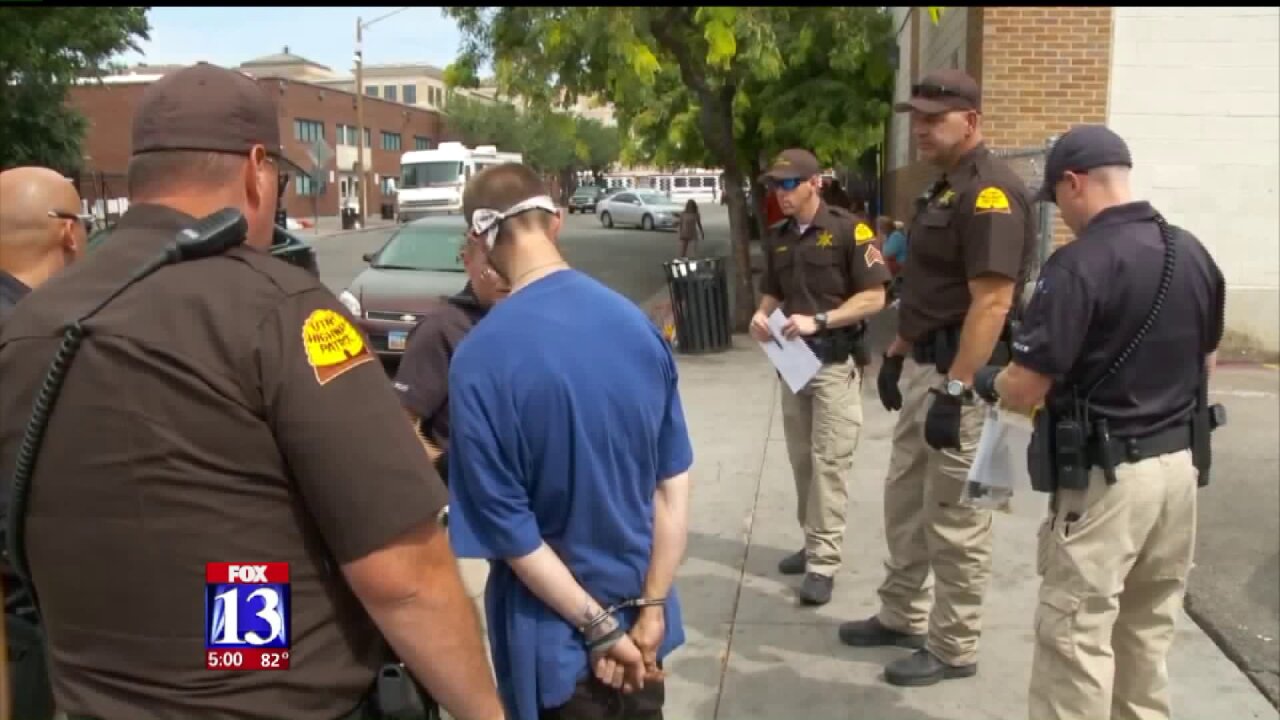 "Operation Rio Grande," as it has been called, is targeting the criminal element preying upon the downtown homeless shelters. The neighborhood has been a problem for years, with an open-air drug market and people camping on the streets.

A woman sleeps on the street as another is arrested during "Operation Rio Grande." (Photo by Ben Winslow, FOX 13 News)

FOX 13 watched as some were handcuffed for outstanding warrants. Others were arrested for drug dealing or using. Authorities said at the end of Monday more than 20 people had been taken into custody, but did not have an exact number.

"We should always err on the side of mercy. Let me be clear that there is nothing merciful about allowing evil to prey on the vulnerable," Lt. Governor Spencer Cox said during a news conference Monday following the launch of "Operation Rio Grande."

State officials said it has been a long time coming, coordinating with Salt Lake City and Salt Lake County. The effort is meant to address the criminal behavior as newer, smaller homeless shelters are built across the Salt Lake Valley.

A man is arrested on warrants and possession of drug paraphernalia during "Operation Rio Grande." (Photo by Ben Winslow, FOX 13 News)

State officials have committed to an increased police presence in the neighborhood until at least 2019. A 24-hour presence will be in Rio Grande for at least the next week.

"This is an encouraging step in the right direction," Matt Minkevitch, the director of The Road Home shelter, told FOX 13 as he stepped out of the shelter doors to watch police searching a man in the middle of the street.

Lt. Governor Cox insisted treatment and resources to get people out of homelessness is coming. For now, people arrested were taken to jails. Nearby counties cleared bed space to accommodate the additional influx of arrests.

"Finally we have the missing pieces of the puzzle to create a holistic process to help this community," said Salt Lake City Police Chief Mike Brown.

By Monday afternoon, the roads that are normally full of people camping on the sidewalks were largely empty. Some who live on the streets told FOX 13 that as soon as cops showed up, dealers took off for other neighborhoods. One woman accused police of hassling the homeless.

Jacob, who has been staying in one of the shelters, said he was hopeful "Operation Rio Grande" would work.

"I think they’re going to do a good job at attacking it, it’s just going to move somewhere else," he said.

Kelly, who has been living on the streets, was more cynical.

"I don’t think it’s going to make a difference. Everybody will just be right back," she said.