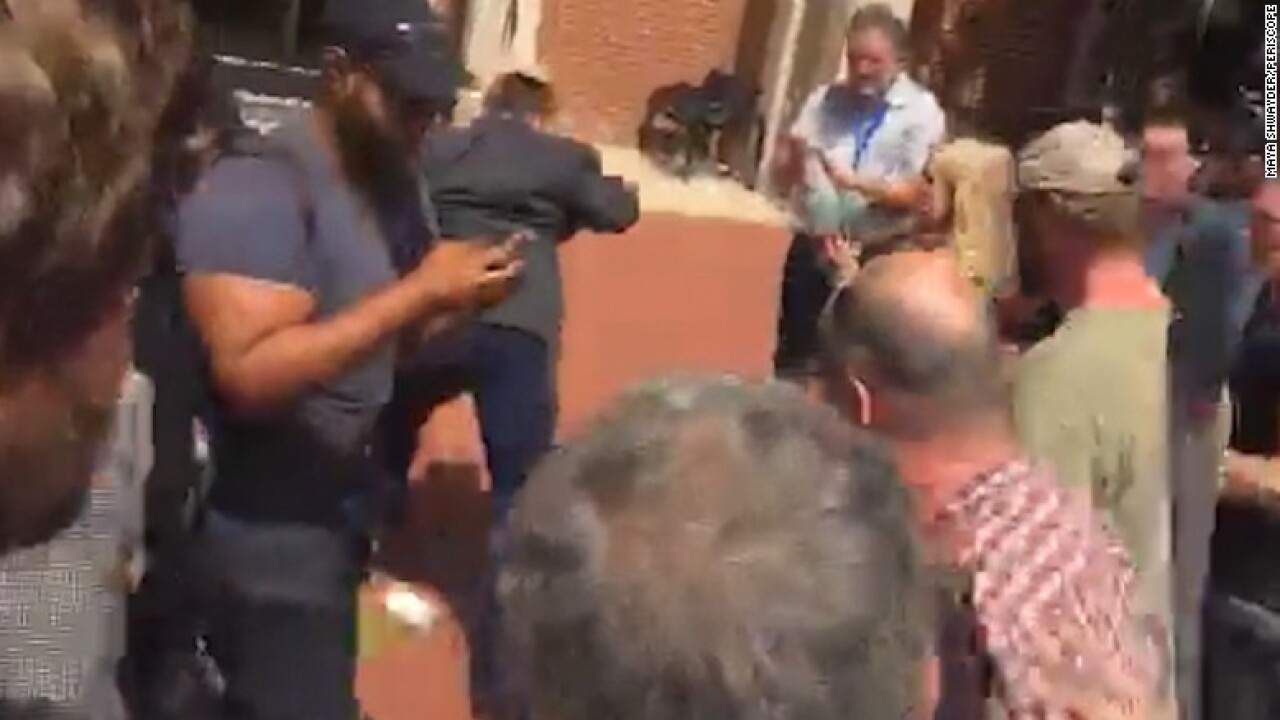 CHARLOTTESVILLE, Va. — Jason Kessler, the Charlottesville, Virginia, resident who organized Saturday’s rally of white nationalists and other groups, was forced to flee his own news conference Sunday after he was confronted by members of a crowd.

“I tried my best but once again violence rules over speech and ideas in #Charlottesville. The First Amendment is finished it seems,” Kessler tweeted.

Kessler was a few minutes into his remarks outside Charlottesville’s City Hall when two members of the crowd, one of whom had been repeatedly yelling an obscenity at Kessler, moved toward Kessler as he stood behind a stand with several microphones on it.

A video posted online by freelance journalist Maya Shwayder shows a crowd of photographers rush up to record the confrontation.

From one side at least one Virginia state trooper moves in.

Twenty seconds into the building chaos, a man in a red plaid shirt comes into the frame and his right arm moves quickly toward Kessler, in what appears to be an attempt to strike or push him.

Kessler appears off balance, rights himself and moves out of the scene quickly. The swarm of people — a mix of journalists and counterprotesters — follows Kessler. Troopers with yellow reflective vests intervene. Then police with riot gear come through and form a line keeping the crowd from moving forward.

Those were the words used Saturday by Virginia Gov. Terry McAuliffe, who told white nationalists who had come to Charlottesville for the “United the Right” rally to go home.

Virginia State Police later said a Charlottesville man was charged with misdemeanor assault and battery after a state trooper observed him spit on Kessler as Kessler was leaving the City Hall gathering.

Before his appearance Sunday, Kessler released a statement blaming police for pushing demonstrators and counterprotesters into violence a day earlier.

“Instead of maintaining law and order, the police purposefully created the catastrophe that led to a melee in the streets of Charlottesville and the death of a counterprotester,” he said.

In the Sunday video, Kessler is hard to hear but he says his group’s First Amendment rights were violated. He says the story of what really happened is not being told.

Some in the crowd yell “Murderer,” referring to the death of Heather Heyer, who was killed Saturday when a car plowed into a crowd of the counterprotesters.

Kessler has said he envisions more events in Charlottesville.