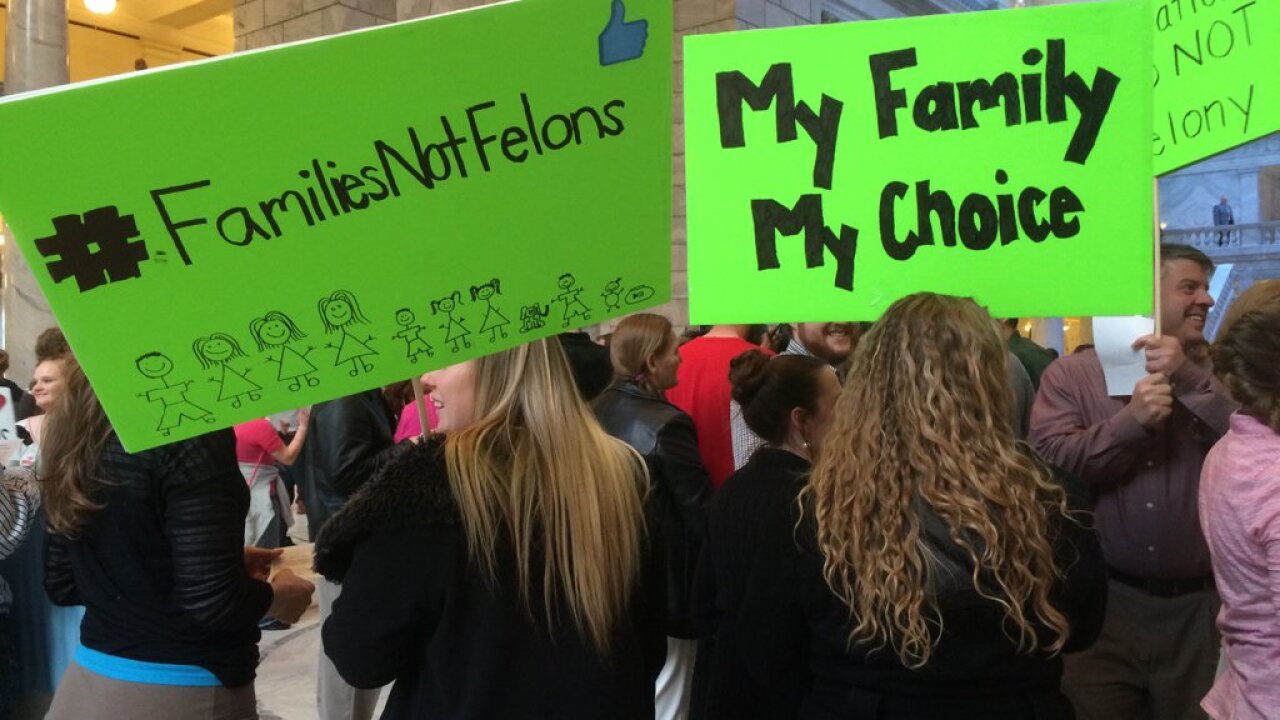 Members of Utah’s polygamous communities protest at the Utah State Capitol against a bill that would “recriminalize” polygamy in March. (Photo by Ben Winslow)

SALT LAKE CITY — Polygamy has reached a new high of moral acceptability, according to a new survey out.

Gallup said 17 percent of Americans surveyed now view polygamy as “morally acceptable.” That’s up from 14 percent in 2016 and seven percent when the survey question first started being recorded in 2003.

A sign with a picture of early Mormon leader Brigham Young is held inside the Capitol by a pro-polygamy activist on Feb. 10, 2017. (Photo by Ben Winslow, FOX 13 News)

“It is certainly true that moral perceptions have significantly, fundamentally changed on a number of social issues or behaviors since 2001 — most notably, gay/lesbian relations, having a baby outside of wedlock, sex between unmarried men and women, and divorce. But these attitudinal changes did not occur in isolation. They have occurred alongside important cultural and legal changes, including the rising propensity of divorce following changes to state laws at the end of the 20th century and the gay rights movement that ultimately succeeded in legalizing same-sex marriage in 2015, to name a few,” Gallup analyst Andrew Degun wrote.

Gallup noted that only 12 percent of self-identified Mormons found polygamy “morally acceptable.” The highest percentage of those who said they didn’t have a problem with plural marriage were those who identified as non-religious or did not have a particular faith (about 32%).

Polygamy remains illegal in Utah and the rest of the nation. The state was founded on the practice of plural marriage when Mormon pioneers entered the territory, but Utah abandoned it as a condition of statehood. Earlier this year, the Utah State Legislature “re-criminalized” it in response to a lawsuit filed by reality TV polygamist Kody Brown, challenging the state’s historic ban.

Members of Utah’s polygamous communities protest against a bill they said targets their community on Feb. 10, 2017. (Photo by Ben Winslow, FOX 13 News)

The mainstream Church of Jesus Christ of Latter-day Saints no longer practices polygamy and excommunicates those who do. There are a number of breakaway sects that still practice it, with an estimated 30,000 fundamentalist Mormons in Utah and surrounding states.