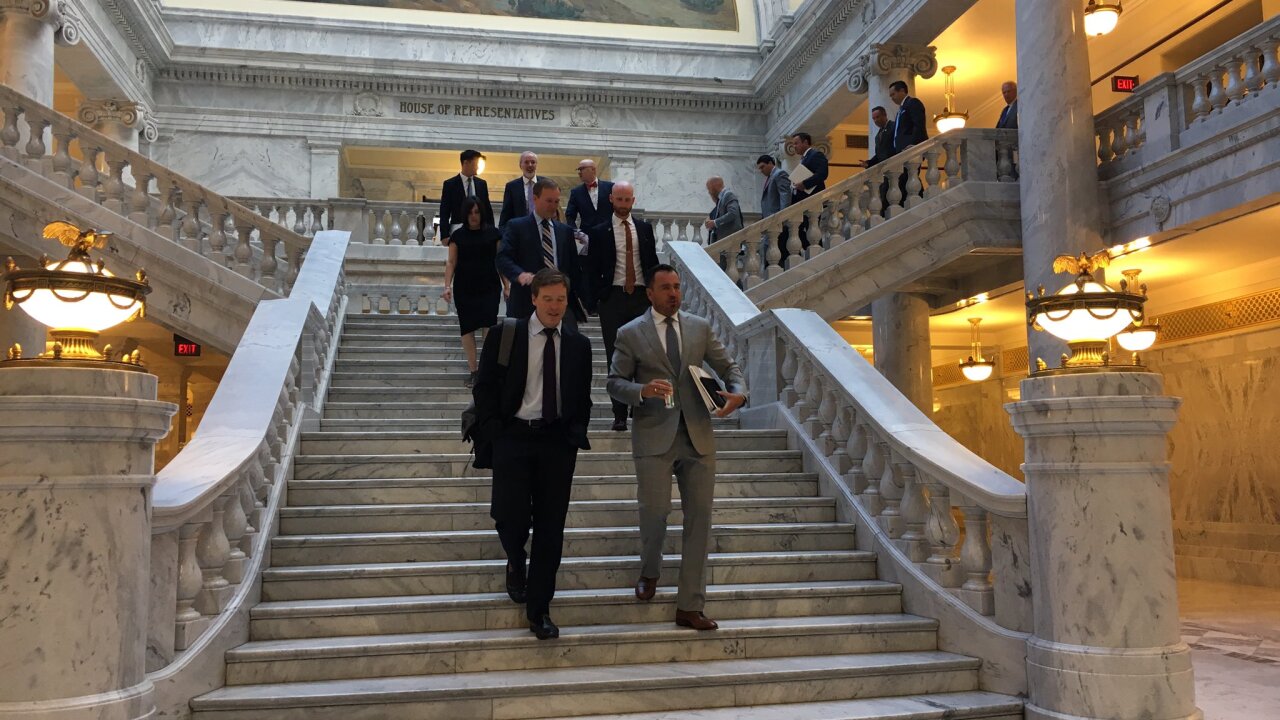 House Speaker Greg Hughes (front right) leads a group of political leaders into a closed-door meeting at the Capitol on the crisis in Rio Grande. (Photo by Ben Winslow, FOX 13 News)

House Speaker Greg Hughes (front right) leads a group of political leaders into a closed-door meeting at the Capitol on the crisis in Rio Grande. (Photo by Ben Winslow, FOX 13 News)

"There’s not an easy fix but I can tell you we’re all committed," the governor told reporters afterward.

The meeting was behind closed doors so they could engage in "very blunt conversations," Speaker Hughes, R-Draper, said. They emerged presenting a united front to address a situation that is quickly spiraling out of control.

There have been two murders in two days in the area around Pioneer Park. Drug crimes are abundant along Rio Grande Street and surrounding blocks. People are camping in medians and on the side of the road.

But at a news conference following the meeting, the politicians would not offer details of a plan to crack down on crime that preys on the downtown homeless shelters.

"We believe right now the lawlessness is the biggest issue. I can’t describe and in that detail to the cartels that may be watching, the criminals that may be thriving in that area what that blueprint looks like," Hughes told FOX 13.

He did confirm there may be more of a police presence in the area and more crackdowns on crime in the neighborhood. Hughes said he wanted to see existing laws more consistently enforced.

Gov. Herbert said he would not call in the National Guard for enforcement, but more resources would be kicked toward social services like treatment for addictions and freeing up bed space. He said his benchmark for success would be when people feel safe walking through Pioneer Park and in the area with their families.

He appointed Lt. Governor Cox to act as a "point person" (the governor rejected the term "homeless czar") for Rio Grande issues from the executive branch.

"I know the citizens are anxious. They want to know are you really doing something or is this just another meeting?" Cox told reporters.

Salt Lake City Mayor Jackie Biskupski said she believed they would see more success with a united approach from the city, county, state and even surrounding communities.

The Utah State Legislature has appropriated $27 million for new shelters and homeless services. However, more money may be needed between now and then to address crime in the Rio Grande neighborhood until the new shelters open in 2019.

At the epicenter of the crimes, the Road Home Shelter's director welcomed the hep in the neighborhood.

"We applaud the goal for humane treatment of individuals who are struggling with drug and mental health issues, and the effort to devote more resources for treatment and beds for those in need," said shelter director Matt Minkevitch in an email. "We also support the effort to curtail supply and demand of illicit drugs in the neighborhood, city and state."