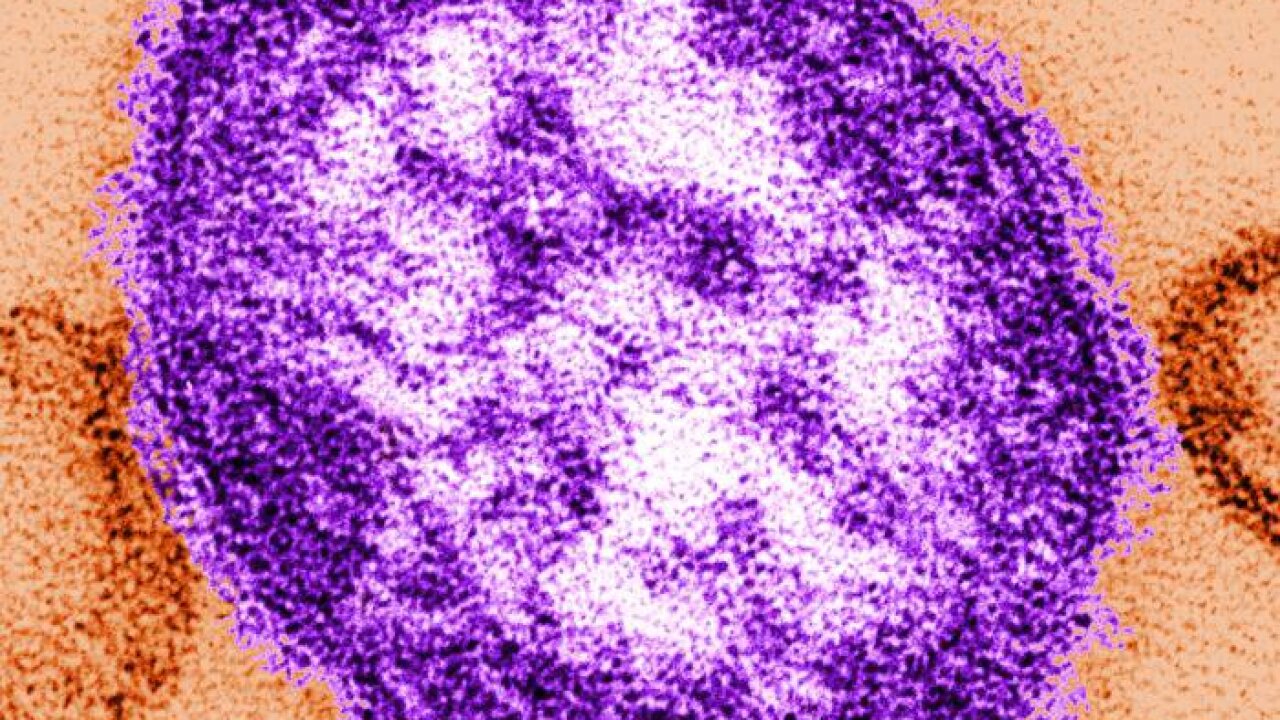 This thin-section transmission electron micrograph (TEM) revealed the ultrastructural appearance of a single virus particle, or virion, of measles virus.

(CNN) — There are now more measles cases in Minnesota than there were in the entire United States last year.

There were 70 confirmed cases of measles across the country in 2016, and the majority of people who got measles were unvaccinated, according to the Centers for Disease Control and Prevention.

In comparison, there are now 73 confirmed measles cases in Minnesota, mostly in unvaccinated children in Hennepin, Ramsey, Crow Wing and Le Sueur counties, according to data released by the Minnesota Department of Health on Thursday.

“Many of the cases could have been prevented if people had gotten vaccinated,” said Kristen Ehresmann, director of the Infectious Disease Epidemiology, Prevention, and Control Division at the state Department of Health.

“This outbreak has gone on now for eight weeks,” she said. “This is a disease that is serious, and the opportunity to prevent it is one that we really need to be taking. … We’d rather invest in preventing disease than spend funds fighting it. We want to focus on promoting health in those instances where we can rather than fighting disease.”

Since the outbreak, at least 8,250 people have been exposed to the measles virus in Minnesota, mostly in schools, child-care settings or health-care settings, and there have been 21 hospitalizations, Ehresmann said.

“When we talk about an exposure to measles, we’re really talking about any time people have shared air space,” Ehresmann said. “Just sharing air space is sufficient to transmit the virus. … It’s transmitted via the respiratory route.”

Measles is highly contagious since it can spread through the air when you cough or sneeze. Symptoms include a high fever, cough, runny nose and rash. The infectious disease can lead to pneumonia, hospitalizations or even death.

“Measles is a dangerous and vaccine-preventable disease. There is no reason to decline MMR unless the individual is too young to be vaccinated or has a severe immunodeficiency and they cannot be vaccinated,” said Patricia Stinchfield, director of infection prevention and control for Children’s Hospitals and Clinics of Minnesota.

“The reason we vaccinate is because of the potential for infection of the brain or lungs that can cause permanent and lasting damage. Death from measles is one to two per 1,000 cases because there is no antiviral medicine against measles. All we can do is provide IV fluids, oxygen and support and hope they survive,” she said.

“The best way to prevent measles is to get vaccinated with MMR on schedule. Do not listen to false messages from anti-vaccine groups, and know that to decline vaccination is to put your child at risk.”

The United States declared in 2000 that measles was eliminated nationwide, but cases can still occur if travelers become infected with the measles virus in another country and then bring the virus into the US. Measles remains common in many other parts of the world, including countries in Europe, Asia, the Pacific and Africa, according to the CDC.

Outbreak ‘has everything to do with being unvaccinated’

About a decade ago, parents in the community started to notice what appeared to be a disproportionate number of Somali children receiving special education services for autism in Hennepin County, home to Minneapolis.

While trying to make sense of the autism rates, the parents discovered the work of discredited British researcher Andrew Wakefield, who first suggested a link between vaccines and autism in a study later found to be fraudulent. Then, local anti-vaccination activists started to hold meetings in Minnesota’s Somali community.

Within a few years, MMR vaccination rates plummeted among Somali-American children in Minnesota.

“We’ve seen a precipitous decline in MMR coverage levels within this community,” Ehresmann said. “Going from actually rates that were higher than the rest of Minnesota, prior to 2007 to 2008, to rates that are currently at 42%.”

Meanwhile, researchers at the University of Minnesota examined data on children ages 7 to 9 living in Minneapolis in 2010 to determine whether there was a higher prevalence of autism in Somali versus non-Somali youth.

The researchers found that Somali and white children in Minneapolis were about equally likely to be identified with autism. Myths about vaccination harms also have widely circulated among wealthy, white communities for years.

Minnesota’s health department is preparing to help prevent any additional transmissions of the measles virus within the Somali community during Ramadan, a holy month of fasting and prayer for Muslims, Ehresmann said. Many in the Somali-American community are observing Ramadan, which began May 26.

“At the end of Ramadan, the big celebratory feast is something that’s attended by everyone, and many mosques will join together for that. So you not only have everyone in attendance, but you also have potential for even greater mixing than usual,” Ehresmann said.

The health department has collaborated with imams, the prayer leaders of mosques, to encourage those who might be sick with measles to avoid gathering with others, as it could spread the disease, she said.

“The imams have let us know that one of the values or messages in Islam is, if someone is ill, that taking time to be alone or to isolate oneself has a spiritual benefit,” Ehresmann said. “That actually would be consistent with some of the messages that we would have about making sure that ill individuals are excluded from social congregate settings.”

As there are large Somali communities in other parts of the country, from Ohio to Seattle, Ehresmann said, Minnesota’s health department has also contacted those jurisdictions to help prevent measles from spreading elsewhere in the nation.

“They are currently working with their own Somali community to address issues of under vaccination, because they realize that there is a potential for spread,” she said. “Our hope is that that wouldn’t be the case.”