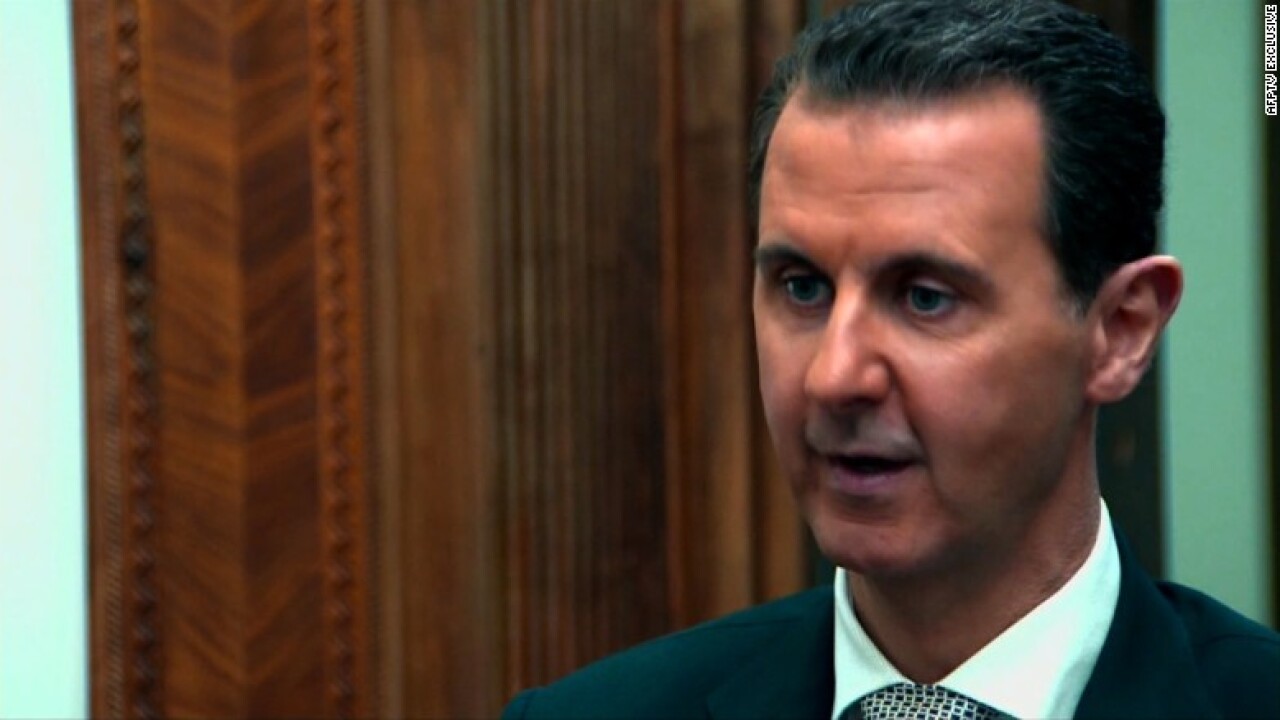 (CNN) — Syrian President Bashar al-Assad has dismissed reports of last week’s chemical attack as “100% fabrication,” an assertion at odds with numerous eyewitness accounts, independent analysis and even the explanation given by its strongest ally, Russia.

In an interview with the AFP news agency, conducted under restrictions imposed by the Syrian government at the presidential palace in Damascus, Assad claimed the reported details of what happened were not credible because their source was al-Qaeda’s former affiliate in Syria, Nusra Front.

He suggested that photographs showing children who had died in the attack, which provoked revulsion around the world, were staged. The entire incident was “fabricated” and “unconvincing,” Assad claimed.

In fact, reports of what happened came from eyewitnesses, victims and medical staff. The day after the attack on April 4, which killed 89 people and injured dozens more, CNN interviewed victims who had fled over the border to Turkey. They recounted the horrific aftermath of a gas attack, saying the town of Khan Sheikhoun was struck by regime warplanes.

Even Assad’s staunch ally, Russia, accepts that the deaths were caused by chemical weapons. Moscow offered the explanation that regime aircraft hit a chemical weapons facility controlled by rebels on the ground.

The UK Ministry of Defense and Turkish authorities say they have carried out tests on samples that provide evidence that Sarin or a similar substance was used. Experts have said that only the Syrian regime is likely to have the capability to produce Sarin, a volatile substance with a very short shelf life.

The interview with AFP’s Damascus bureau chief took place on Wednesday. Severe restrictions were placed on the news agency: it was not allowed to film the interview itself; instead, the encounter was filmed by the Syrian presidency. Only footage of first five questions asked by the interviewer was provided to AFP.

Syrian state news agency SANA later published what appeared to be the full transcript and video of the entire interview.

“We gave up our arsenal three years ago,” he said. “We have never used our chemical arsenal in our history.”

He added that “morally” the Syrian government would never do this “because it’s not acceptable.”

In 2013, Syria was blamed for a chemical attack that hit the rebel-held Damascus suburb of Ghouta, in which activists say 1,400 people died. UN weapons inspectors returned “overwhelming and indisputable” evidence of the use of nerve gas, although their mandate did not include assigning blame for the attack.

Shortly after, under pressure from the West, Syria agreed to a Russian proposal to give up control of its chemical weapons.

In his AFP interview, Assad accused the West, particularly the United States, of being “hand-in-glove with the terrorists” over the Khan Sheikhoun incident. He claimed details of the attack were made up in order to give the US an excuse to bomb a Syrian airbase in retaliation. “They fabricated the whole story in order to have a pretext for the attack,” he said.

This assertion is a departure even from the statement given by the Syrian army In the aftermath of the attack, which blamed “terrorist groups” for the carnage. Neither did Russia deny the event occurred: Moscow claimed the deaths were the result of a regime airstrike on a chemical weapons stockpile on the ground, controlled by “terrorists.”

Images of children foaming at the mouth shocked the world last week. Doctors at hospitals near the scene told CNN that victims had died of asphyxiation.

But Assad said it was possible to fake video and suggested the whole incident had been staged. “We don’t know whether those dead children were killed in Khan Sheikhoun, were they dead at all?” he said.

CNN and other international media interviewed victims of the attack who described how many of their relatives were killed. One man told how 25 members of his family had died, including his two young twins. He was pictured cradling their dead bodies.

Assad said no proper investigation had been possible because the area was controlled by Nusra Front.

“The only information the world have had till this moment is published by al Qaeda branch,” he said. “No-one has any other information.”

Assad said he would only allow an “impartial” external investigation involving “unbiased countries,” according to AFP.

However, independent bodies are already investigating. The Organization for the Prohibition of Chemical Weapons has said it is gathering evidence about the attack but cannot comment on an ongoing investigation.

The World Health Organization said last week that some victims showed symptoms consistent with exposure to a category of chemicals that includes nerve agents.

That conclusion was supported by rights group Amnesty International, which said victims were “very likely” to have been exposed to a compound such as Sarin.

Russia, a close ally of Syria, on Wednesday vetoed a UN Security Council resolution which sought to condemn the killings and call on the Assad regime to cooperate with an international investigation into the attack.