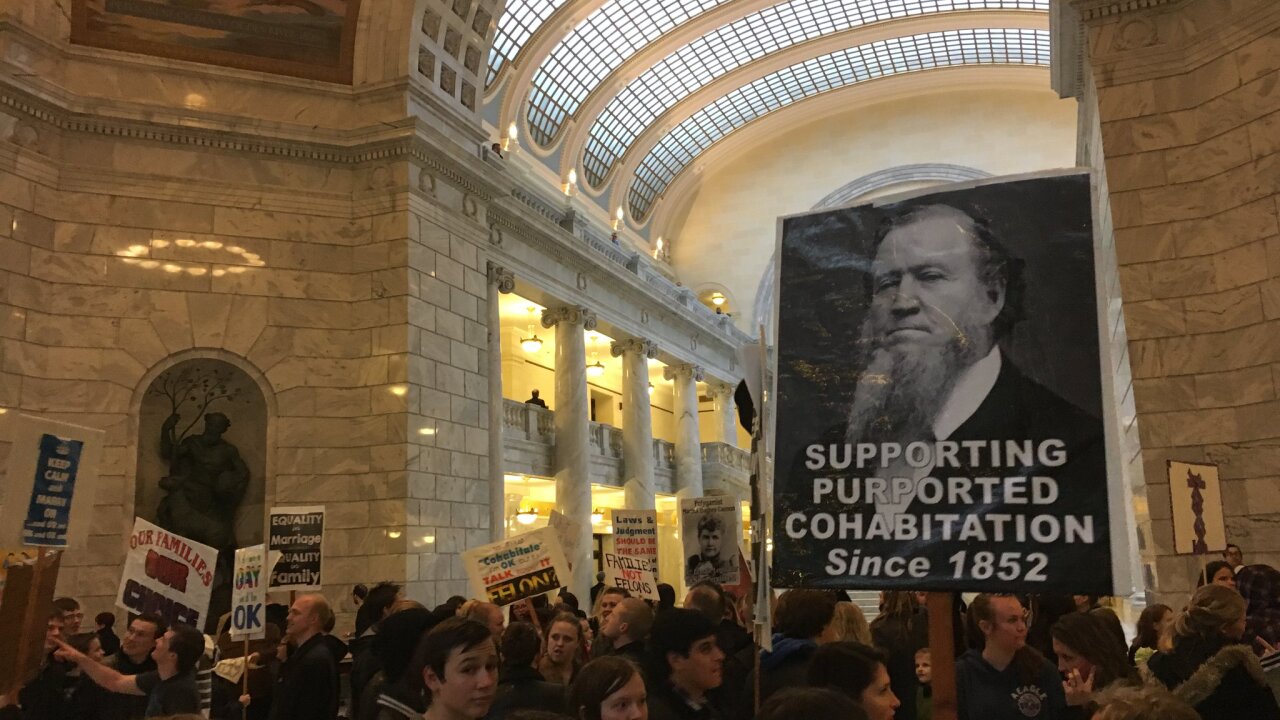 A sign with a picture of early Mormon leader Brigham Young is held inside the Capitol by a pro-polygamy activist on Feb. 10, 2017. (Photo by Ben Winslow, FOX 13 News)

Beyond some major changes to Utah’s liquor laws, another big bill signed on Tuesday was House Bill 99, which effectively “re-criminalizes” polygamy in Utah. The bill, sponsored by Rep. Mike Noel, R-Kanab, makes it a crime for someone to live with multiple people and “purport” to be married.

The Utah Attorney General’s Office pushed for the bill to clarify the law in the aftermath of a lawsuit leveled by reality TV polygamist Kody Brown and his wives against the state. A federal judge in Utah sided with the Browns and struck down a portion of the state’s historic ban on plural marriage (Utah abandoned polygamy as a condition of statehood). The case wound its way to the U.S. Supreme Court, which declined to hear it, making polygamy illegal again.

While lawmakers insisted they were also offering an olive branch to people seeking to leave polygamy and report abuses and not seeking to go after consenting adults in plural relationships, those in fundamentalist Mormon communities protested the bill as an attack on their religious freedom and way of life.

Members of Utah’s polygamous communities protest against a bill they said targets their community. (Photo by Ben Winslow, FOX 13 News)

“It’s not going to keep me quiet. Unfortunately for a lot of communities this will impact them,” said Joe Darger, a polygamist who lobbied lawmakers against the bill. “It will set work backwards as far as opening up dialogues. This causes more of these communities and families that are fearful to go further underground and covers the safety net that is there for real abuse victims that have nothing to do with polygamy.”

Darger told FOX 13 late Tuesday he was contemplating a legal challenge to the bill because it targets fundamentalist Mormon families.

“We feel like we have a lawsuit based upon their targeting one specific religious minority population,” he said.

Gov. Herbert told reporters last week when he was still deliberating over the bill that he wanted to ensure Utah was in compliance with the law and recent rulings.

“Polygamy is an antisocial unsustainable practice that hurts many, so we are pleased that the state of Utah has taken action to demonstrate that it takes the abuses of polygamy seriously. Polygamy has enjoyed de facto decriminalization for decades, and polygamists will continue to be in no danger of prosecution unless they commit other crimes. We trust that the Attorney General’s Office will use this new law as it uncovers criminal activities within polygamist communities,” the group said in a prepared statement.

Among the other bills signed by the governor on Tuesday: One that allows minors to sue over unwanted exposure to pornography (with exemptions for adult entertainment websites), a bill cracking down on Doxing, and a resolution honoring the transcontinental railroad.

The environmental group HEAL Utah said it was told Gov. Herbert had also signed into law a bill that allows for backyard grilling on bad air days. They had protested Utah grill maker Traeger, which lobbied heavily in favor of the legislation.

The governor did exercise a line item veto on the budget for programs funded, but not passed by the legislature. He also allowed a handful of bills to take effect without his signature.

Here’s the bills that will go into law without the governor’s signature: