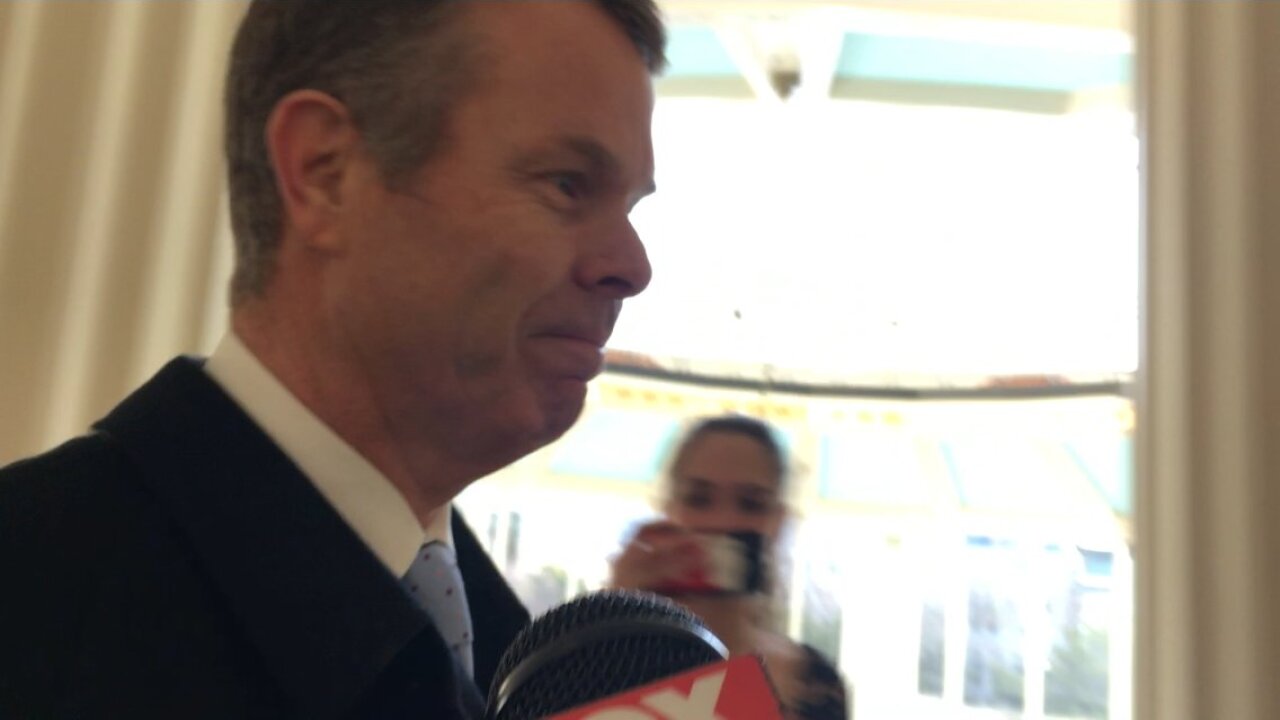 SALT LAKE CITY -- The corruption trial of former Utah Attorney General John Swallow is under way, with prosecutors trying to convince a jury of his guilt.

But Swallow's defense insists the case is pure politics.

"This case starts with politics and I think you'll see continues to be politics," Swallow's attorney, Scott Williams, told the jury in opening statements on Wednesday.

Swallow has pleaded not guilty to a number of felony corruption-related charges, accused of accepting gifts and donations from people facing investigation by the Utah Attorney General's Office. He resigned about a year into office following investigations by law enforcement, the legislature and the Lt. Governor's Office.

Criminal charges were dismissed against his predecessor, Mark Shurtleff, after the prosecutor in that case said federal authorities refused to hand over evidence. But as they laid out their case, the Salt Lake County District Attorney's Office focused as much on Shurtleff as they did on Swallow.

She showed the jury a chart with Shurtleff's picture at the top. Beneath it was Swallow's picture and Tim Lawson, a friend of Shurtleff's who described himself as a "fixer." Prosecutors claimed he asked Marc Jenson -- who faced criminal investigation for securities fraud -- for money on behalf of Shurtleff.

Jenson paid for trips for Shurtleff, Lawson and Swallow to Pelican Hill, a posh California resort. Swallow went back with his wife for an anniversary trip on Jenson's dime, Collins claimed.

She told the jury Swallow hit Jenson up for work, telling him: "You need to pay me. I'm going to be the next attorney general and I can't live on that salary."

Collins outlined other business deals and lawsuits involving Shurtleff and Swallow. She said there was a houseboat that Swallow stayed on owned by St. George businessman Jeremy Johnson, who faced consumer protection complaints. Swallow allegedly told him he'd "take care of it" when he was attorney general, because he'd be boss over the agency.

Prosecutors accused Swallow of asking the Utah Attorney General's Office IT staff to "wipe" devices, and losing phones, an iPad and external drives.

"He's an airhead!" Williams countered in his opening statement, insisting there was nothing nefarious there.

Williams attacked the credibility of the state's witnesses, including Jenson, whom he showed the jury a picture with the words "CON MAN" in red letters over it.

"You won't take his recommendation on which toothpaste to buy," Williams told the jury.

He said Swallow was the victim of a "political frenzy" on Utah's Capitol Hill, and criticized the prosecution's "shotgun" approach to the charges, showing the jury a target with buckshot all over it.

Williams said on one of the Pelican Hill trips, Swallow was a private citizen and not attorney general. On a trip to Johnson's houseboat, he said Swallow paid for his own gas and food. Williams described Swallow as a "political hypochondriac," saying that when Johnson was seeking to lobby Sen. Harry Reid for help in an FTC investigation, Johnson sought to make it appear as if it was a bribe.

It wasn't, Williams said, but "it worked."

Jenson was the first witness in the case, testifying about how he reached out to Shurtleff when under investigation for securities fraud, and was instead forced to deal with Lawson. In hours of testimony on Wednesday, he described giving Lawson money that was meant for Shurtleff, forced to hire Swallow, and then having them all invite themselves to Pelican Hill, where he lived.

"Lawson said Shurtleff had to come down and see me and Swallow was coming. You need to start making some plans," Jenson testified to the jury, adding that when he balked he was told: "Jensen, if you don't do this they're just going to throw you in prison."

Jenson described the three living it up during stays at Pelican Hill, racking up thousands in room service, rounds of golf and massages. The jury was shown photos and receipts from the trips.

Jenson claimed he was also forced to pay money to a man named Mark Robbins at Shurtleff's insistence as part of his "restitution." Robbins also stayed at Pelican Hill, Jenson testified.

Jenson said Shurtleff asked him to buy $250,000 worth of a book the attorney general was writing about Dred Scott, and asked for him to help get a movie deal for it. When he said he couldn't buy the books, Jenson said Lawson confronted him the next day and said "You can't say no to Shurtleff."

Jensen is expected to continue testifying on Thursday.