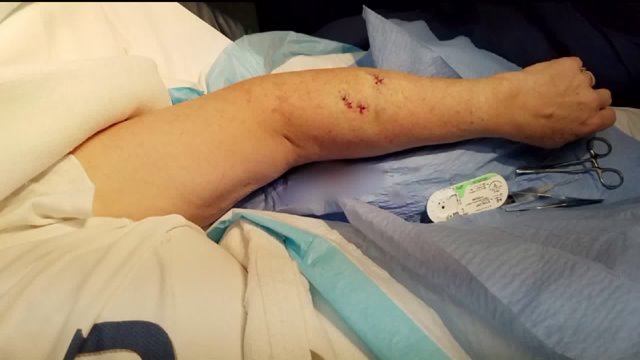 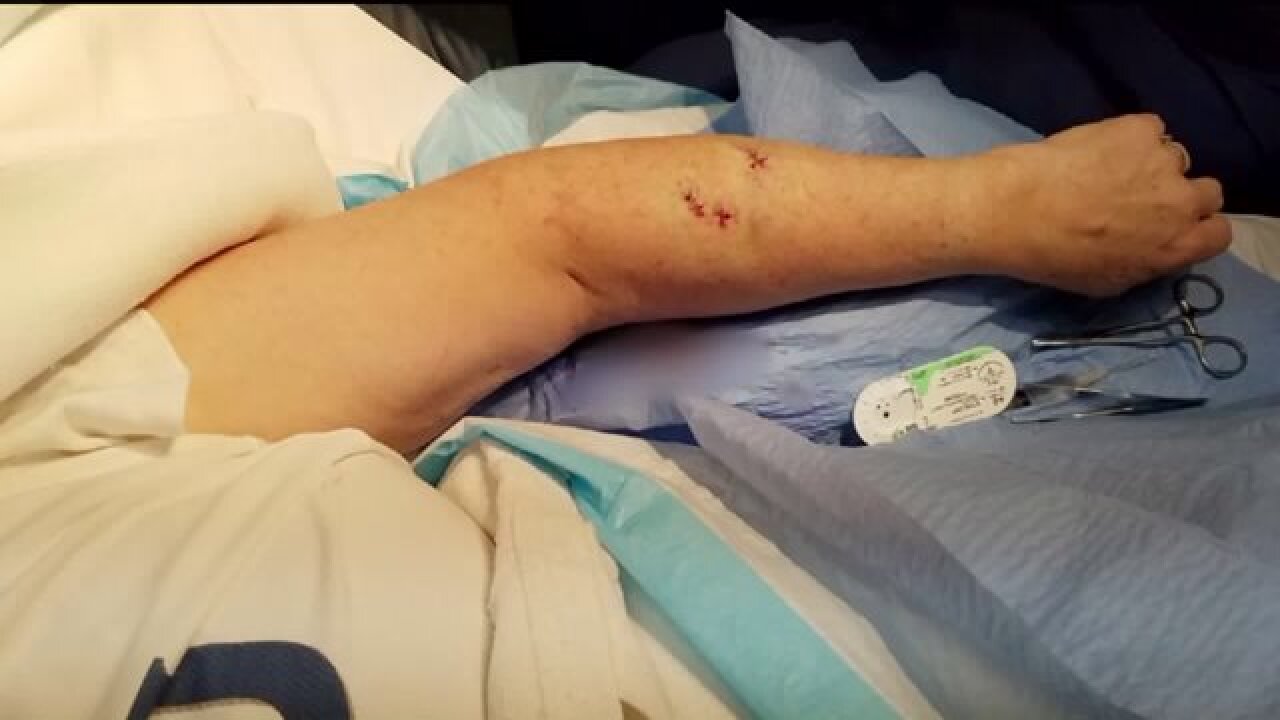 One of those dogs, a 4-year-old pit bull, was euthanized Wednesday morning, according to her owners.

Sierra Coe credits two Good Samaritans who risked their own safety to help her after the dogs rushed at her and wouldn't back down outside the Millville Post Office.

Laura Ferguson was one of those women.

On Wednesday evening, she sat in her living room with her legs elevated and bandages covering her leg, arm and ankle.

"This one bled a lot," she said, pointing to her knee.

Her arm and leg have deep puncture marks. Her ankle is the worst off, with a gaping hole exposed to the bone.

"He took a chunk out of me," Ferguson said. "He severed a nerve and some blood vessels and a tendon."

Her neighbor's two dogs are to blame, after Laura said she was attacked. She was trying to help Coe, a complete stranger.

Coe had just left the Millville Post Office when the two dogs came running after her.

"All of a sudden, she started screaming," Ferguson said.

"The pit bull just jumps up and starts grabbing my arm, and just tearing, and it wouldn't let go," Coe recounted.

The owners of that pit bull, named Sadie, said she and a 10-month old Great Dane named Jagger escaped out the family's garage on accident. Sadie tore through Sierra's coat and shirt, while Jagger jumped on her.

"What was I supposed to do, just stand there and watch this dog just tear her to pieces?" Ferguson asked.

But when Ferguson tried to help: "All of a sudden she was on the ground and it was dragging her, and just pulling her by her leg," Coe said of what she witnessed.

Ferguson said Sadie and Jagger both bit her.

A third person, another neighbor, also jumped in. She, too ended up bit by Sadie. Ferguson said this isn't Sadie's first incident.

"It has attacked at least one other person," she said.

Sadie's owner told Fox 13 off camera that she was a rescue dog, and they'd been working with her on training.

They made the decision Wednesday morning to put her down, and surrendered Jagger to Cache County for quarantine and re-adoption. The family is torn up about what happened, and losing their beloved pets.

"It's just a sad situation, it really is," Ferguson said.

Both women said they are glad no one else will end up hurt.

And Coe said Ferguson and the other neighbor saved her.

"I was just so grateful that they were there," Coe said.

The Cache County Sheriff's Office said Wednesday that animal control is investigating the case, and a county attorney will decide whether to pursue criminal charges.