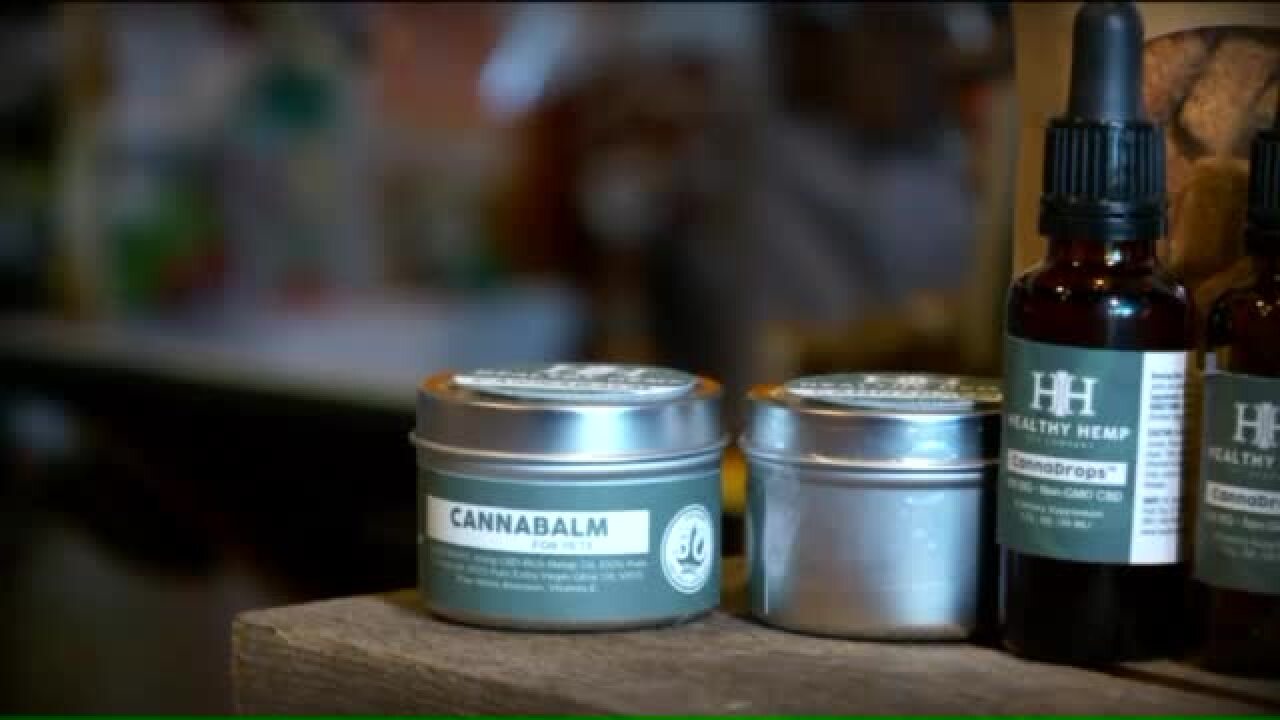 SALT LAKE CITY -- A Salt Lake City company is exploding in popularity around the country as dog and cat owners claim the products—with an ingredient found in cannabis—are leading to dramatic improvements in their pets' health.

Eska the 2-year old husky is happy on these hemp products.

"This is the best I’d ever seen her," Cody Bandley, Eska’s owner, said. "She just seems as calm as can be, relaxed."

Two days before Fox 13 captured the calm canine chewing on her bone as she lay on her dog bed, we filmed her when she was off of the treats. The anxious puppy panted and paced around the house over and over.

"She’ll do this for hours, especially late at night," Bandley said, watching Eska circle around the living room.

Bandley said he once tried traditional medicines from a vet but found they didn't work too well.

"She had an allergic reaction to one," he said.

They carry all the Healthy Hemp concoctions: The biscuits, oil, spray, salve and feline mix.

Anderson's husband and Desert Raw co-owner Luke Shaw said the biscuits are most popular, but the product in general is, "Our number one seller, every single day."

The products contain a big-name ingredient in the cannabis world: cannabidiol, or CBD.

While the ingredient is found in marijuana, Healthy Hemp Pet Company owner Dave Merrell explained his products are not marijuana for pets.

"It comes from a hemp plant," he said. "There’s no psychotropics in it, there’s no THC in it."

THC is the main psychoactive component in marijuana. In other words, CBD won't get your dog—or even you—high. But, it may have therapeutic effects.

Merrell said the CBD is produced in Colorado, and the biscuits in Wisconsin. The other products are manufactured in Salt Lake City.

But the testimonials come from all over.

"It’s awesome," Merrell said of the feedback he's gotten. "Some of these letters are, they’re tear-jerkers. It’s like, ‘We got a member of our family back.'"

The quest to come up with these all-natural, non-GMO, gluten-free and nearly 100% made in the USA dog and cat treats started with one of Merrell's own family members. His Airedale, Mya, suffers from hip dysplasia. He said it's certainly helped Mya, and hundreds, perhaps thousands, of animals across the nation.

But what do veterinarians think of his home-spun remedies?

A few months back, Dr. Henneman started giving the treats a try, first on her own animals and then on her furry, four-legged clients.

"We had several people get back to us pretty quickly and say, 'Wow, we saw a really big difference,'" she said.

She now recommends them, and in some cases does so as a first choice over other drugs for certain ailments.

"Primarily, we’re recommending it for lameness and soreness where we have a diagnosis," she said.

"Jack suffers from too many birthdays, really, he’s got a little arthritis," she said, petting her Newfoundland Border Collie mix.

Merrell randomly met Ware Peak on a hiking trail, and noticing Jack's slow movement and limp, asked if she would try the treats out.

Fox 13 met with Ware Peak on the first day, then checked in with her exactly a week later.

"I was hoping that it would sort of magically erase that little limp that he has," she said.

It didn't, but Ware Peak said she saw other, more subtle differences in Jack.

"He's jumped into the car a lot more," she said. "That's something that shows promise for me."

Even though her results weren't as life-changing as some of those the other animal owners said they have seen, she said she'll continue feeding Jack Healthy Hemp Pet.

"If Jack can be a little bit happier in his old age, I think it’s definitely worth it," she said.

Merrell said while not all veterinarians have jumped on board with the products, the company soon hopes to start clinical trials so they can learn more about how CBD affects animals.