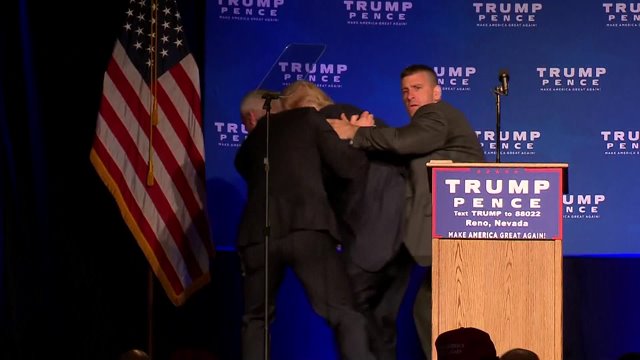 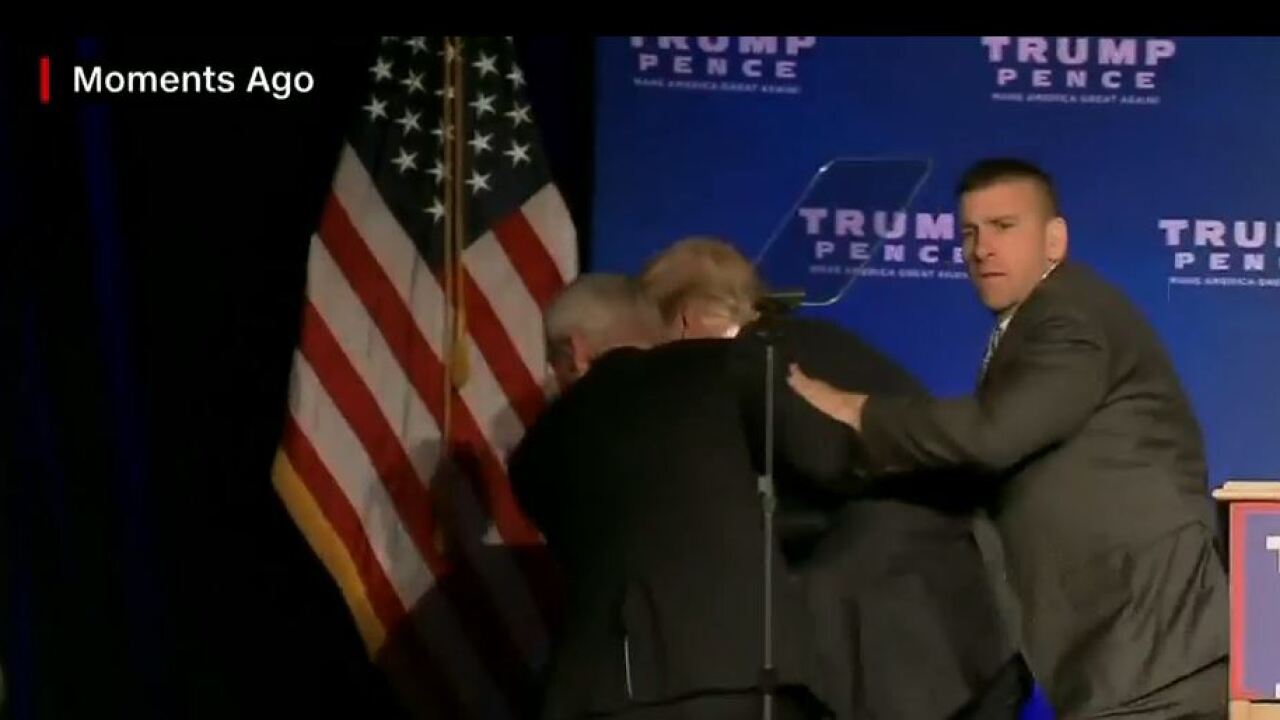 RENO, Nevada (CNN) -- Donald Trump was rushed off a stage here Saturday by Secret Service agents during a campaign speech after an incident in the crowd near the front of the stage.

The Secret Service spokesperson said an "unidentified individual" shouted "gun" in the audience, though no weapon was found.

The suspect was immediately taken into custody and led out by a throng of police officers, Secret Service agents and SWAT officers armed with assault rifles to a side room.

Got footage of man who was detained by police and Secret Service after @realDonaldTrump was rushed off stage by USSS agents pic.twitter.com/FVEieSYj5w

The Secret Service did not immediately provide further details and said an investigation was ongoing.

Trump was unharmed and returned to the stage minutes later to finish his speech.

Trump was in the middle of his stump speech when the commotion occurred. He was looking into the crowd, his hand over his eyes to block the glare from the stage lights, when Secret Service agents grabbed him and escorted him off the stage. Trump ducked his head as he left the stage.

The crowd surged backward, some supporters with frightened looks on their faces, as the Secret Service and police tactical units rushed in to detain a man.

Several attendees at the rally said they saw a Trump supporter raise up a sign and then a scuffle ensued.

A message left with the Trump campaign was not immediately returned. A spokesman for the Reno police department directed media inquiries to the Secret Service.

The Republican nominee returned to the stage several minutes later.

He then returned to his regular stump speech. Trump is scheduled to speak later Saturday night at a rally in Denver.

He later issued a statement about the incident.

"I would like to thank the United States Secret Service and the law enforcement resources in Reno and the state of Nevada for their fast and professional response," he said. "I also want to thank the many thousands of people present for their unwavering and unbelievable support. Nothing will stop us -- we will make America great again!"

Secret Service agents rushed to shield Trump onstage in March after a man tried to rush the stage during a rally in Dayton, Ohio, but the GOP nominee wasn't escorted off stage.

And a man was arrested at a rally in Las Vegas in June after he tried to grab a police officer's gun, which he said he planned to use to shoot Trump.