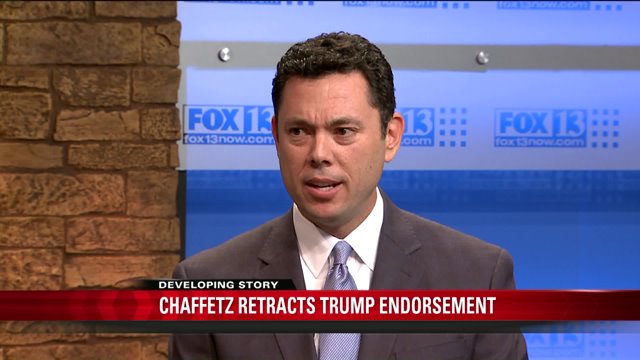 SALT LAKE CITY – Less than a month after he withdrew his endorsement of Donald Trump, Utah Congressman Jason Chaffetz stated Wednesday he will be voting for the Republican nominee because Hillary Clinton, “is that bad.”

Chaffetz withdrew his endorsement of Donald Trump live on Fox 13 News October 7, several hours after video from 2005 surfaced that featured Donald Trump bragging about kissing and groping women without their consent.

“I’m out,”  Chaffetz said earlier in October. “I can no longer in good conscience endorse this person for president. It is some of the most abhorrent and offensive comments that you can possibly imagine.”

But Wednesday the Republican from Utah’s Third Congressional District tweeted: “I will not defend or endorse [Donald Trump], but I am voting for him. [Hillary Rodham Clinton] is that bad. HRC is bad for the USA.”

I will not defend or endorse @realDonaldTrump, but I am voting for him. HRC is that bad. HRC is bad for the USA.

When withdrawing his endorsement, Chaffetz said he couldn’t look his 15-year-old daughter in the eye if he were to endorse someone who said the things Donald Trump did. He also did not mince words about his view of Trump’s suitability for The Oval Office.

“And why should we tolerate this?” Chaffetz asked. “This is the Presidency of the United States of America: I just can’t do it.”

Stephen Tryon, a Democrat running against Chaffetz, issued a statement in response Wednesday:

“As I said during our debate, Jason Chaffetz has a habit of deceiving the American people in order to advance his political career. We now see, for the second time, that Chaffetz will even associate with sexual predators if it helps his career. How can such a man claim to represent Utah values? Chaffetz lacks the character to represent a Cub Scout troop, much less the people of the 3rd District. What does it mean when such a man says he can no longer support Trump? It means nothing. Chaffetz’s word means nothing, and, like Trump, he is unfit to lead and does not deserve Utahns’ vote in this election.”

See the full interview with Chaffetz from October 7 below: