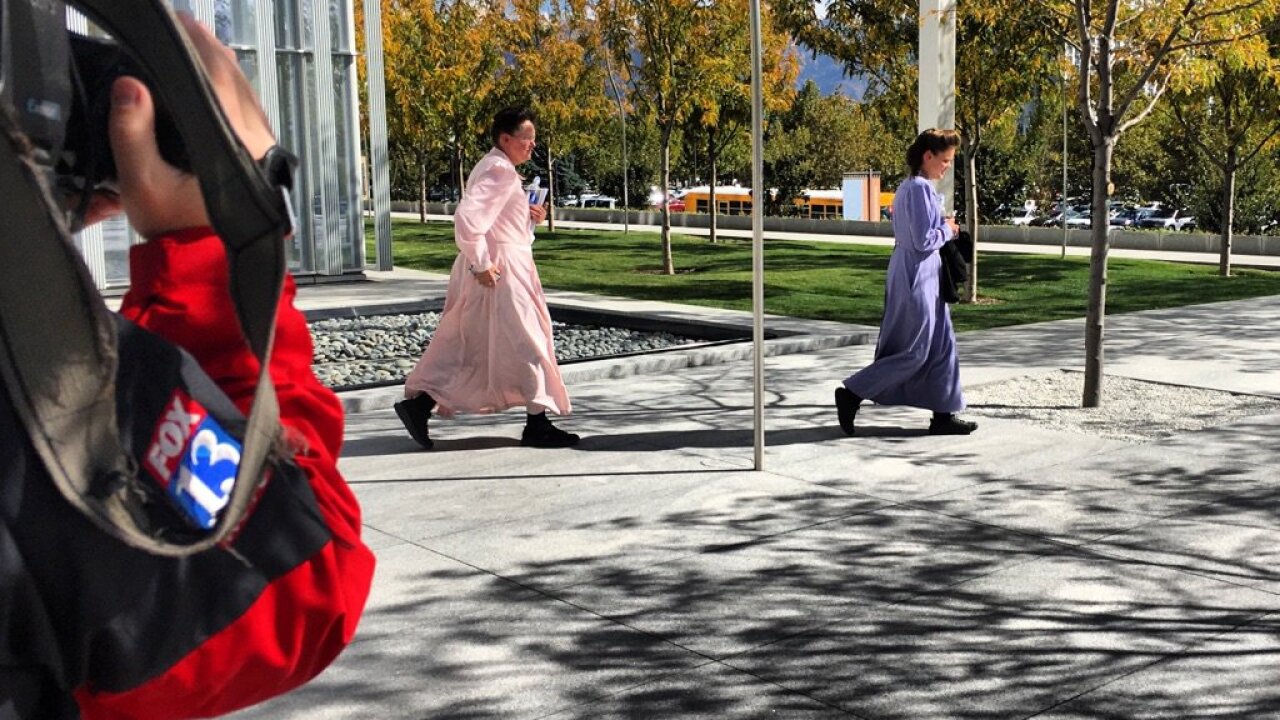 Members of the FLDS Church leave federal court on Tuesday after a hearing on religious freedom rights.

SALT LAKE CITY -- Members of the Fundamentalist LDS Church charged in a massive food stamp fraud and money laundering scheme are arguing a religious freedom right to "consecrate" their government benefits to their church.

The results of the hearing in federal court could make or break the government's case against the polygamous church and some of its top members. Federal prosecutors have charged 11 FLDS members, accusing them of ordering faithful members to hand over food stamps to the storehouse, to do with as they wished. The U.S. Attorney's Office has claimed the scheme exceeds $12 million in taxpayer money, and some of it went to purchase luxury cars or was spending cash for leaders.

"They can’t give their benefits that Congress awarded them solely to feed their family to other people who didn’t go through that process, didn’t file an application, were not determined to be eligible, didn’t make the disclosures about their income and assets that’s required to protect public money," said assistant U.S. Attorney for Utah Rob Lund.

The FLDS are arguing they have a First Amendment religious freedom right to give their Supplemental Nutritional Assistance (SNAP) to their Bishop's Storehouse, because their faith teaches them to consecrate all they have to the church.

"All is not ours anyway," FLDS leader Seth Jeffs testified on Tuesday. "It all belongs to Heavenly Father."

On the witness stand, shackled and in a jail jumpsuit, Jeffs (the brother of imprisoned FLDS leader Warren Jeffs) told the judge it was a "privilege" to give all that he has to his church in order to achieve exaltation in the afterlife. From 2010 to 2011, Jeffs said he worked in the Bishop's Storehouse, where people would take their consecrated items, which are then doled out according to "just wants and needs."

Jeffs, whose family is receiving SNAP benefits, insisted that if he is not able to live the "Law of Consecration," he cannot fully practice his religion.

"If I'm not able to give everything I receive, I can't live my religion," he said. "So it's a choice of giving up food stamps or giving up my religion."

The "Law of Consecration" stems from early Mormon teachings about united orders, where people give what they have to the church and it is doled out according to needs. A retired Mormon history professor testified on Tuesday that what the FLDS Church preaches is no different than The Church of Jesus Christ of Latter-day Saints taught in the 19th century.

Lyndon Cook said he found the FLDS Church "strikingly similar" to the LDS Church in the days of Brigham Young and Joseph Smith.

"Their language is the language of the 19th century Mormon," he told the judge.

Under cross examination, Cook acknowledged early Mormon leaders were silent on the issue of receiving government benefits, but did preach obeying the law of the land.

"They would break that law in an instant if asked to or if it conflicted with their beliefs," Cook told government prosecutors.

The government insists that SNAP benefits are given out to eligible recipients only and not to be distributed freely. They have sought to limit the defense's religious freedom arguments.

Members of the FLDS Church leave federal court on Tuesday after a hearing on religious freedom rights.

U.S. District Court Judge Ted Stewart has pressed the defense on whether any defendants are actively receiving SNAP benefits right now and if not, are their religious freedom rights burdened? Some of the defendants, through their lawyers, acknowledged their families are SNAP recipients.

The hearing concluded with testimony from an official with the U.S. Department of Agriculture (which administers SNAP benefits) testifying that there are exemptions given for groups like tribes and group homes for the elderly or disabled. He said the USDA has never discussed whether their SNAP requirements burden religious practices.