At least 51 dead after blast at wedding in Turkey; suicide bomber was 12-14 years old 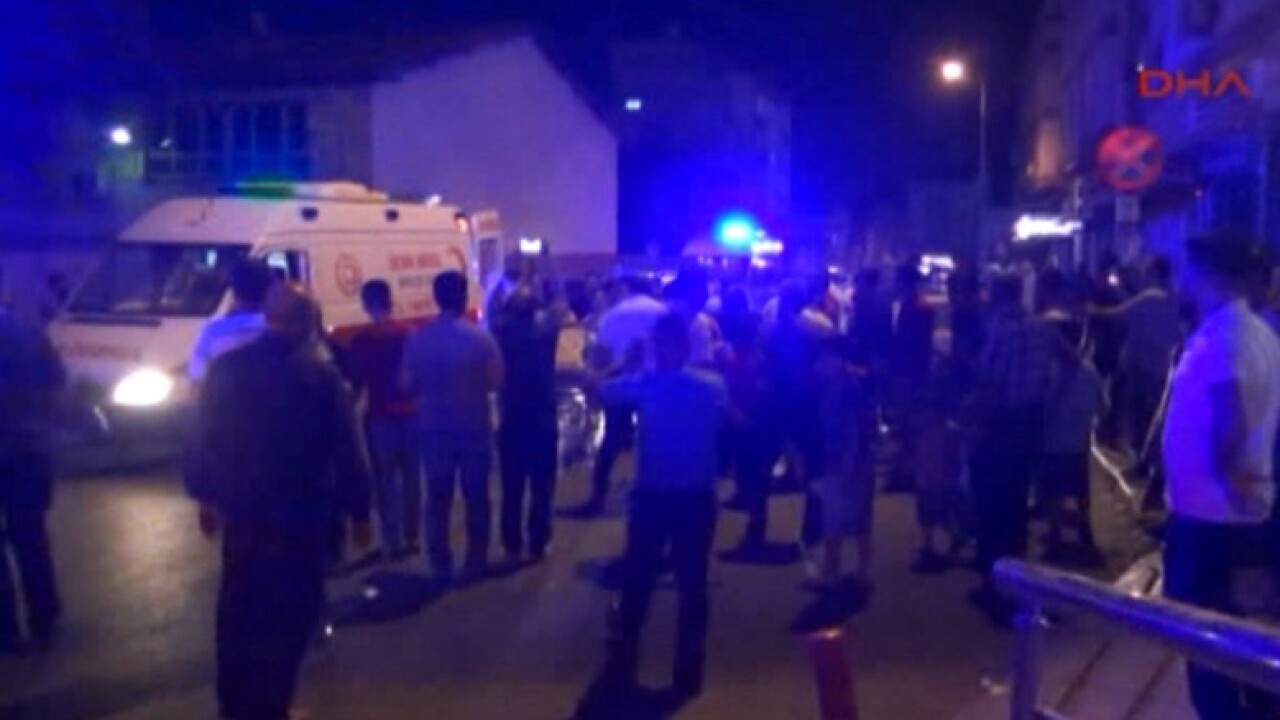 GAZIANTEP, Turkey (CNN) — Hakki Okur’s family was searching hospitals for him Sunday morning after an explosion at a Kurdish wedding in Turkey killed at least 51 people.

The 14-year-old boy’s sister had last seen him running away after a small explosion at 11 p.m. Saturday, said his cousin Mesut Bozkurt. Suddenly, a larger explosion knocked the sister to the ground. She awoke in a hospital. She remembered last seeing her brother alive.

“We looked for Hakki in hospitals and police station all night long,” Bozkurt said. “At 5.30 we were called to identify his body. No injuries on his head but burns on his chest. We think he may have been trapped in the panic, since he was a skinny boy.”

The family learned later Sunday morning that Hakki’s killer was between age 12 and 14.

Other children were among the dead.

Emine Ayhan told Turkish television the bombing seriously injured her husband and killed four of her five children. “If my remaining child was not alive, I would commit suicide,” she said.

Authorities found a suicide vest at the scene, although it is unclear whether the boy bomber blew himself up or it was detonated remotely, the bomber’s age apparently giving authorities pause at assigning him blame.

The age and the number of victims was the salient information Turkish President Recep Tayyip Erdogan delivered Sunday, according to Turkish media.

The attack hit an outdoor wedding celebration in a conservative Kurdish neighborhood in the city of Gaziantep, near the Syrian border. In a year of bloody terrorist attacks in Turkey, the wedding bombing ranks among the worst, the death toll surpassing the attack on the Ataturk Airport, which killed 44.

Speaking to reporters in Istanbul, the Turkish President said the terror group ISIS was the prime suspect behind the attack.

“The initial findings of the governor and our police forces indicate the attack has been perpetrated by Daesh,” said Erdogan, using another term for the terror group. “As you know, Daesh is trying to position and organize itself in Gaziantep. Security operations have been conducted and are still being conducted against the terrorist organization.”

Kurdish militants, who for decades have conducted attacks against the Turkish government in their quest for independence, have become key American allies in the battle against ISIS.

By late Sunday afternoon, at least 43 of the victims had been buried, following Islamic tradition. Sixty-nine people were wounded in the blast, with 17 of them in critical condition, reported Anadolu Agency, Turkish state-run media.

The bride and groom were among the injured, although their condition was not critical, Anadolu reported, citing hospital officials.

The White House and the State Department quickly condemned the attack and expressed solidarity with Turkey and the victims. “The perpetrators of this barbaric act cynically and cowardly targeted a wedding, said Ned Price, spokesman for the National Security Council.

Officials have found pieces of a detonated suicide vest at the scene, the agency reported. Witnesses to the blast described horrific scenes to Anadolu, with one telling the agency that body parts were strewn across the bomb site.

“We couldn’t see anything. Nothing but body parts,” Sukru Akdogan, the groom’s brother, told Anadolu.

The blast occurred in the Beybahce neighborhood of Gaziantep’s Sahinbey district about 10:50 p.m. Saturday, according to the Gaziantep governor’s office. Gaziantep is about 95 kilometers (60 miles) north of the war-torn Syrian city of Aleppo.

The target was a crowded street in a Kurdish neighborhood where the Kurdish wedding party was taking place, according to Turkey-based journalist Andrew Finkel.

He said there were a number of reasons the Sunni terror group — if it is responsible for the attack — could have been motivated to strike Kurdish targets.

Kurdish militia have played a central role in recent battlefield victories against ISIS in northern Syria, including driving the group from the key city of Manbij earlier this month and cutting a key supply route from the Turkish border to its heartland in Raqqa.

“This may very well be a revenge attack for that,” Finkel said.

The blast may also have been an attempt to inflame ethnic tensions in the city, home to many refugees from the Syrian conflict, he said.

ISIS operatives have previously struck in the bustling southern Turkish city of about 1.5 million people, with the group claiming responsibility for the shootings of anti-ISIS activists in Gaziantep in December and April.

Turkey, which allows planes from the US-led anti-ISIS coalition to operate from its air base at Incirlik, has been in ISIS’ crosshairs, with the group blamed for a series of bomb attacks in the country throughout the year.

Erdogan: ‘No difference’ between Turkey’s enemies

No group has yet claimed responsibility for the Gaziantep blast.

But in a statement condemning the attack, Erdogan identified ISIS as the likely perpetrator.

The statement reiterated Erdogan’s position, expressed after three bombings targeting security forces in eastern Turkey last week, that there was “no difference” between the three main opponents of his government — namely the terror group ISIS; the outlawed Kurdistan Workers Party, or PKK; and the network of US-based cleric Fethullah Gulen, state-run Anadolu news agency reported Sunday.

Erdogan accuses Gulen of being behind a failed coup attempt last month; Gulen has denied the accusation.

“Those who cannot overcome Turkey and try to provoke people by abusing ethnic and sectarian sensitiveness will not prevail,” Anadolu quoted Erdogan as saying.

US Vice President Joe Biden will visit Turkey on Wednesday, with Turkey’s demand for Gulen’s extradition to be top of the agenda.

Even before the attempted July 15 coup, Turkey had experienced a year of bloodshed and political turmoil, weathering a string of deadly bomb blasts, blamed variously on ISIS and the PKK.

In the most recent attacks, 11 people were killed and hundreds injured in three bombings targeting security forces in eastern Turkey last week. The Turkish government blamed the PKK.

Clashes between the PKK and Turkish forces have flared up again since a peace process crumbled in 2015, bringing an end to a two-year ceasefire.

Since then, Anadolu reports, hundreds of Turkish security forces and about 5,000 PKK members have been killed in the conflict.