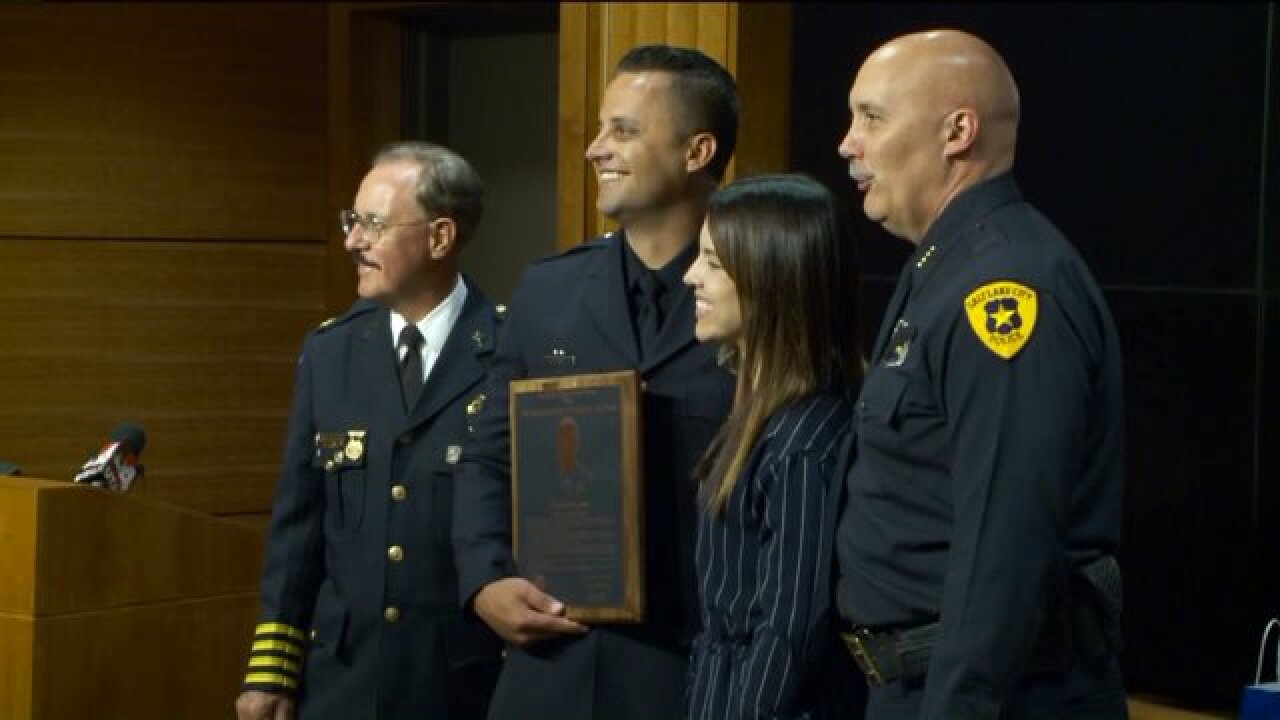 SALT LAKE CITY – Two sisters in Salt Lake City were terrorized by an attacker last year, and this week the officer who rescued them received more recognition for his heroism

Bre and Kayli Lasley were attacked in September of last year when a fugitive broke into their home.

“The blade of his hunting knife he brought into the house was right up against my throat,” Bre Lasley recalls. “I remember him whispering in my ear, 'I’m going to kill you.’"

It was at that moment Ben Hone, an officer with the Salt Lake City Police Department, intervened.

“Initially I thought it was one of our attacker’s friends,” Lasley said. “I couldn’t hear Kayli screaming anymore, and so I thought they had killed Kayli, and then I saw officer Hone’s eyes, and I immediately knew that I was safe.”

Hone shot and killed the intruder, likely saving Bre Lasley’s life. This week Hone was honored by the National Association For Chiefs of Police as the Officer of the Year.

“It’s a great honor to be presented with such an award when there’s so many great and deserving men and women that serve our community every day,” Hone said.

For Bre, that night inspired her.

“I was literally wrapped in the arms of evil, someone trying to violently take my life, and I knew as soon as I saw Ben in the basement and had that feeling of gratitude and safety that he risked everything to come and save me, I was going to stand up for police officers,” she said.

Bre has started a group called “Like Ben” in an effort to inspire others to follow Hone’s example.

That night also forged a lasting friendship between Hone and the Lasleys.

“It’s very rare that we have any kind of association with the people we help in our communities, so to have the privilege to know Bre and her family, and to be a part of our family at this point, it’s very nice,” Hone said.

Lasley said Ben is always welcome in their home.

“There were several people in our front yard that night, and Ben Hone was the only one who came in our basement to help us, and if he didn’t then I wouldn’t be here today,” she said. “He’s my hero forever.”

A plaque with Officer Hone's name will be displayed at the American Police Hall of Fame in Florida. The Hone family plans to visit that museum and then take a trip to Disney World afterward to celebrate.