Some Tooele fire victims have lost everything and have no insurance 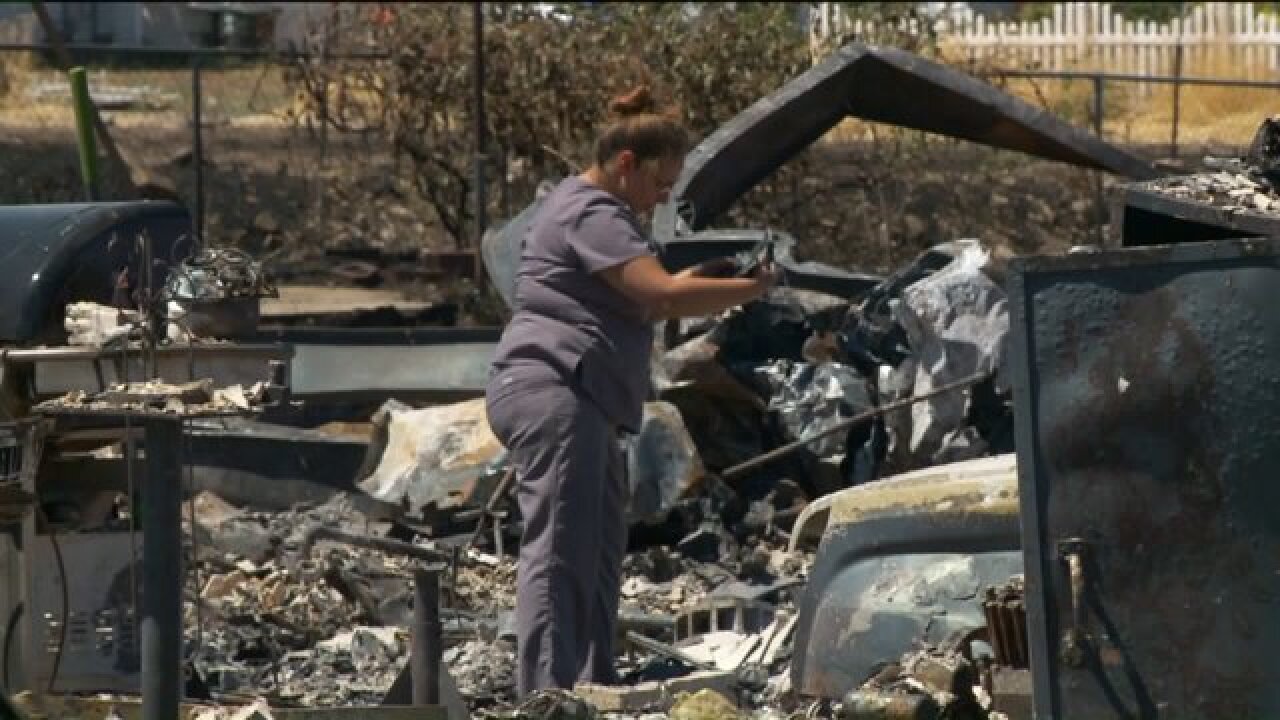 TOOELE -- Albert Arellano sifted through the ashes of what's left of his home and plucked out a metal sign that reads "spirit" and "faith."

"We have another discovery from the fire. We haven't lost our spirit or our faith," his wife, Sandra Martinez, said.

The couple lost everything they owned in the massive fire that destroyed 10 homes and damaged eight others here. On Thursday, they returned to go through what's left in hopes of finding mementos and heirlooms.

"Everything is gone," she said. "We barely got out by what was on our backs."

Albert Arellano picks out a sign that says "spirit" and "faith" out of the rubble of his home in Tooele. (Image by Ben Winslow, FOX 13 News)

Arellano said they had only seconds to escape when neighbors woke them up, pounding on their door. The fire, which started across a field, was on top of their house. Martinez, surrounded by family, looked out at the land her family has had since 1975.

"It's just like what do you do when you lose every dang thing you ever owned or had in your life?" she told FOX 13.

"You have this importantance around you, the important part escaped the fire and that's the people and pets," her sister, Lori Weirich, said, hugging her.

Martinez and Arellano acknowledge they can rebuild. Weirich is an insurance agent and showed up Thursday with a folder of papers to help them. They know some of their neighbors are not so lucky.

"A few of these homeowners do not have insurance and that's a real tragedy," said Tooele Fire Chief Bucky Whitehouse.

Destruction from the Tooele fire. (Image by Ben Winslow, FOX 13)

Throughout the day on Thursday, firefighters have been making sure the fire does not rekindle. Whitehouse said it could have been much worse, but the mostly volunteer firefighters from across Tooele County worked hard to make sure it didn't hit more homes.

Relief organizations huddled at Tooele County's Emergency Management Center on Thursday afternoon to plan for short-term and long-term needs for victims of the fire. Over the next few days, volunteers will help remove the debris so rebuilding efforts can begin. Valley Behavioral Health offered to have grief counselors on hand as that happened, so people can process their loss.

The Utah Red Cross agreed to lead efforts to help fire victims. The shelter it set up at a nearby elementary school was slated to close Thursday night, as most victims had found places to stay temporarily.

Meanwhile, Tooele police continue to investigate the fire, which they have said is arson. Officer Tanya Turnbow said police arrested a man overnight wanted for questioning. Jesse Barger, 24, was booked into the Tooele County Jail on outstanding warrants and questioned about the fire.

"The details of any information obtained from him is still under investigation at this point. We're not releasing that," she said.