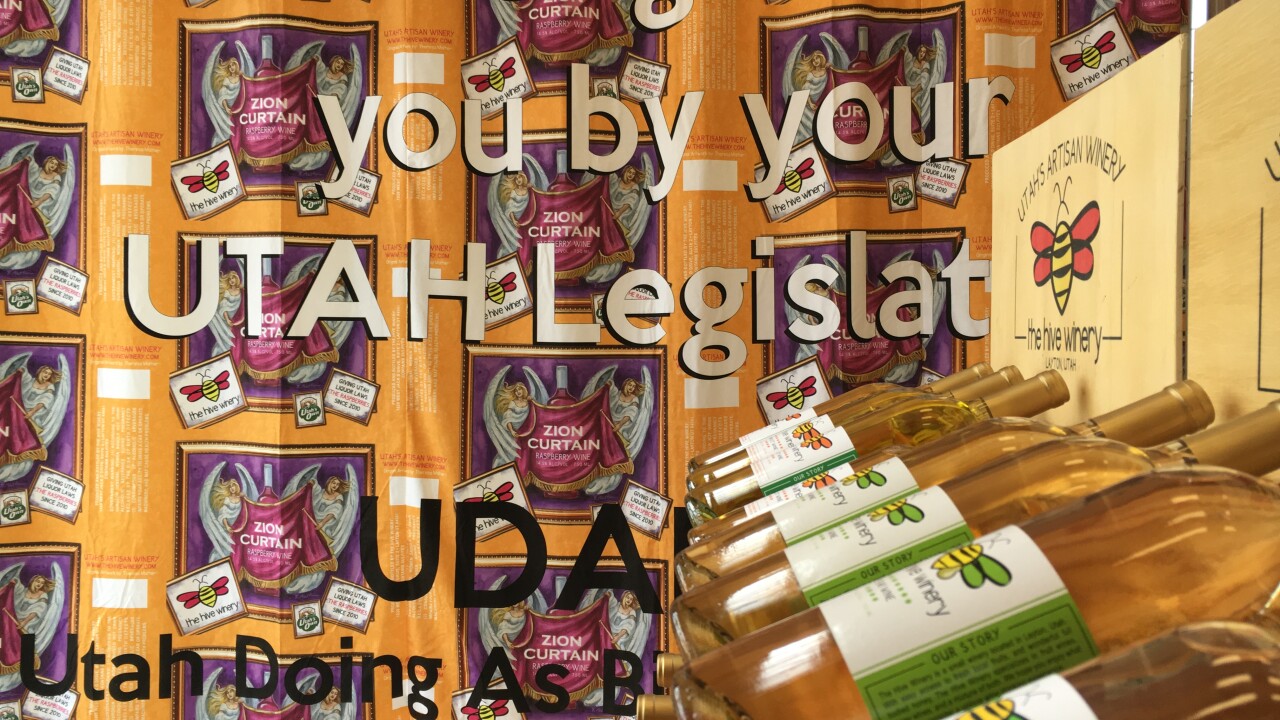 LAYTON, Utah -- The Hive Winery is pulling back the curtain on Utah liquor laws and the Mormon church's influence by staging a political protest on their so-called "Zion Curtain."

Winery owner Jay Yahne is required by law to install the separate preparation areas designed to keep minors from seeing a drink being poured, if he wants to do tastings of his wines or brandies. A new law taking effect July 1 also requires him to charge customers for the tasting and serve food with it. That doesn't bother him as much as the curtain, which he describes as "dumb."

So he put up a curtain that says it's "brought to you by your Utah Legislature."

"It does make that political statement that it's a dumb rule and a dumb portion of the law and credit is where credit's due," Yahne said in an interview Monday with FOX 13.

The "Zion Curtain" at the Hive Winery in Layton, put up by the owners as a political protest of Utah liquor laws. (Image by Ben Winslow, FOX 13 News)

The tapestry uses an image from one of his raspberry wine labels, which touts "giving Utah Liquor laws the raspberries since 2010." (The Hive Winery, which makes fruit-based wines, also tweaks local culture with a polygamy-themed "SisterWives" bing cherry wine, an "Elder Jack" raspberry/black currant wine, and a "Bishop's daughter" with a label asking customers to "Give this cherry a try!")

The Hive Winery's new Zion Curtain also weighs in on The Church of Jesus Christ of Latter-day Saints' influence on alcohol policy, replacing the acronym for the Utah Department of Alcoholic Beverage Control to say "Utah Doing As Bishop Commands."

"If those in Utah who don't believe the Mormon church controls what is done in Utah, are naive," he said.

Yahne points to last month's DABC commission meeting, where a pair of restaurant liquor licenses were threatened by the LDS Church not weighing in on whether they would grant or reject a proximity variance requests. In previous decisions about liquor licensees located near a church, library, park or school, silence was interpreted by the DABC commission as tacit approval. But last month, that stance changed when DABC commission chairman John Nielsen said the LDS Church informed him their silence was not consent.

A bottle of wine tweaking Utah culture at the Hive Winery in Layton. (Photo by Ben Winslow, FOX 13 News)

Zion Curtains have always been controversial. Usually walls, they're mandated by state law to keep children from seeing drinks being made. Lawmakers argue they safeguard against an allure of alcohol for minors, while also maintaining the distinctive difference between restaurants and bars. When they don't have to build the walls, some restaurants pour the drinks in a back room.

Stopping by the Hive Winery for a tasting on Monday afternoon, California resident Sandy Wild said the curtains were "silly."

"They (parents) don't hide at home when they have a glass of wine, why hide it here?" she said. "It might make them think of something bad if it's behind the curtain."

Yahne insisted his Zion Curtain complied with the law and what he chose to write on it is his First Amendment right to free speech. The DABC had no comment on the winery's curtain when contacted by FOX 13.

"I'm always ready for that audit when I make enough of these political stinks," Yahne said. "I toe the line on everything and this meets the absolute letter of the law."