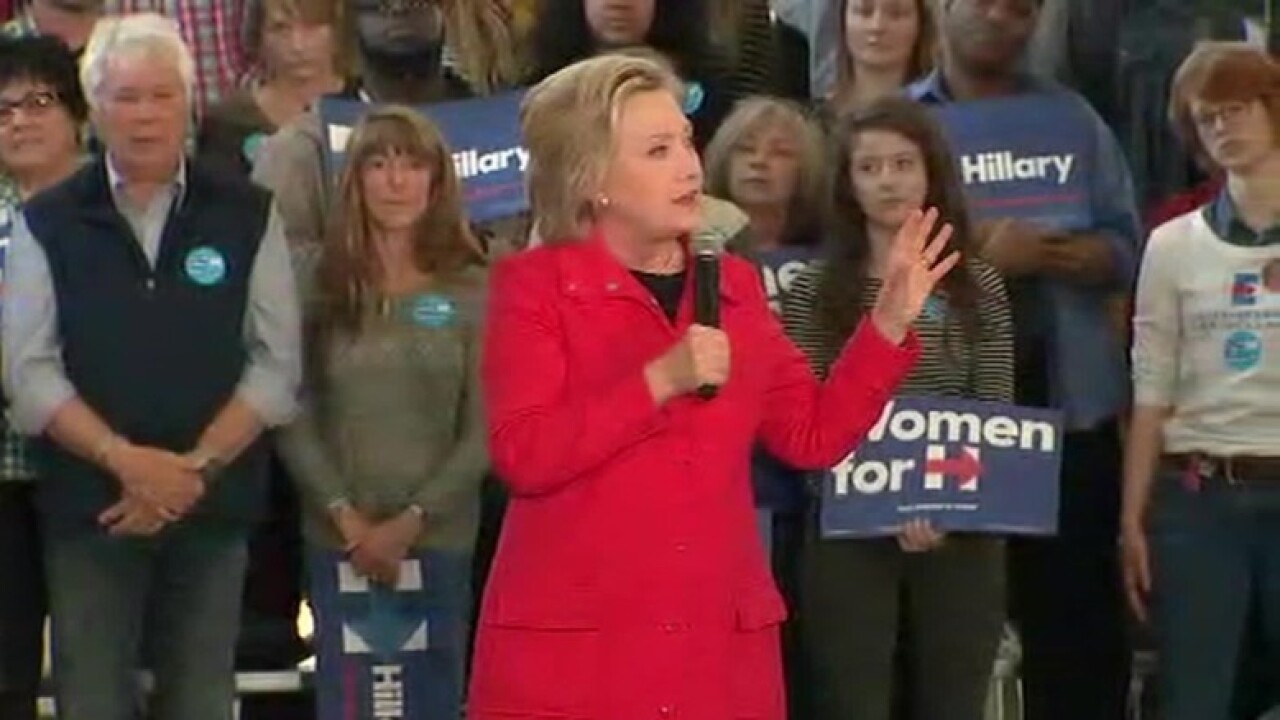 (CNN) — Ninety-six years after women won the right to vote, a woman stands a chance of winning the White House.

Hillary Clinton — former first lady, former U.S. senator, and former secretary of state — has become the first woman to capture a major-party nomination for president, taking another step in a journey that once seemed impossible, but over the last eight years has seemed inevitable.

She now faces a general election race against Republican Donald Trump that will be seen as a referendum on women in politics, gendered stereotypes about power, and women as a voting bloc. Polls show dramatic splits based on gender, with men going for Trump and women favoring Clinton — even as Clinton has struggled with winning over young female voters in her primary run against Bernie Sanders.

“I know we have never done this before. We’ve never have had a woman president,” she said Saturday night in Fresno, California. “That is why I want you to understand, that I have spent eight year in the Senate on the Armed Services Committee, four years as secretary of state. I have spent a lot of hours in the Situation Room working to solve some of the hardest problems we face. And I know how hard this job is and how much humility you need to have and how you should actually listen to people who have good ideas.”

Clinton’s close primary loss to Barack Obama in 2008 was itself historic, setting up the nomination of Sarah Palin as a running mate on the Republican side, and the sense that a woman in the White House was an eventuality.

Eight years later, Clinton has a shot at making that sense a reality.

“This is the most historic moment for women in politics that we’ve seen in contemporary times,”said Jennifer Lawless, co-author of “Women on the Run” and director of the Women & Politics Institute at American University. “If you look back to the ’18 million cracks’ speech, that seemed monumental and that was a loss. Symbolically it’s a big deal, and substantively, it means that the country is willing to move forward with a female president.”

In 1969, when Clinton graduated from Wellesley College, just 53% of the public said they would back a well-qualified woman for president, according to a Gallup poll. Now, for many — including young women — it is nearly unremarkable that a woman could lead the free world, a shift that Clinton noted in 2008 and linked to her historic first run.

“You can be so proud, that from now on, it will be unremarkable for a woman to win primary state victories, unremarkable to have a woman in a close race to be our nominee,” she said eight years ago to her supporters when she conceded to Obama. “Unremarkable to think that a woman can be the president of the United States. And that is truly remarkable, my friends.”

While she largely played down her gender in her first run, she has often wrapped her second presidential campaign in specific appeals to women, arguing that being a woman in the White House would be the ultimate outsider credential.

“I can’t think of anything more of an outsider than electing the first woman president, but I’m not just running because I would be the first woman president,” she said at an October debate moderated by CNN’s Anderson Cooper. “I’m running because I have a lifetime of experience in getting results and fighting for people, fighting for kids, for women, for families, fighting to even the odds. ”

For Clinton, winning the White House will mean navigating a cultural and political terrain that includes a record number of women in Congress (some of whom will be eyed for the Democratic ticket), and a kind of pop-culture feminism embraced by celebrities as diverse as Beyonce and Joseph Gordon-Levitt.

On the stump, Clinton has sometimes taken the stage to Katy Perry’s “Roar” a seeming nod to the Helen Reddy classic that was a soundtrack for the women’s movement. Rachel Platten’s “Fight Song” plays at the end of her appearances.

But there is also deep anger and mistrust of traditional politicians and anxiety around progress, with presumptive nominee Donald Trump channeling those sentiments in unpredictable and highly charged ways.

“Trump has been playing to gender resentment and been appealing to men who think that women have gotten too far along and threatened by female progress,” Lawless said. “Usually we see GOP candidates trying to close the gender gap and appeal to female voters, that’s usually the recipe. His “whole woman card” argument is that it’s a detriment to him that he is a man in politics.”

According to the latest Quinnipiac University poll, Clinton leads Trump 45% to 41% among registered voters—like other Democrats she fares better among women then men.

Yet the margins are glaring, a signal that this will be a much different race, with gender as a prominent fault-line.

The gender gap at this point is an astonishing 40 points — Clinton leads among women by 24 points and Trump leads among men by 16 points.

Both Clinton and Trump have sought to widen the current gender divide, campaigning both on policy and personality.

For his part, Trump has embodied the “alpha male,” trouncing his 16 primary opponents by knocking them over their stature and their stamina. He has complained that football has become “soft like our country has become soft” and told China “to go f— themselves.” And in a CNN debate, he assured American voters that there was no problem with the size of his penis.

“He has clearly played his own gender card — which is masculinity,” said Kelly Dittmar, author of “Navigating Gendered Terrain” and a scholar at the Center for American Women and Politics at Rutgers University.

“And he has attacked her in gendered ways by mining stereotypes like talking about the sound of her voice,” Dittmar added. “It doesn’t look like he is changing that strategy.”

As for Clinton, she launched her campaign a year ago with a low-key video featuring everyday women, digging in their gardens, preparing for the working world and taking care of their kids. She has joked that she might not be the youngest candidate, but she would be the youngest female president.

And she has embraced the idea of the “woman card” — an actual, pink card “woman card” is offered on Clinton’s web site.

“The other day, Mr. Trump accused me, of playing the, quote, ‘woman card,’ ” Clinton said in April. “Well, if fighting for women’s health care and paid family leave and equal pay is playing the woman card, then deal me in.”

Yet, rather than seeing women coalesce around her in the Democratic primary, as African-Americans did with Obama in 2008, Clinton has struggled to rally young women to her side — Sanders has attracted a huge following among young women.

And Clinton’s surrogates have often failed to get young women to see her as an historic figure, a lapse that some Clinton supporters find disconcerting.

“I think there is a dichotomy that somehow some of us who are older, we haven’t conveyed what went before adequately,” said Connie Barrington, a 68-year old retired librarian who showed up at a Clinton rally in California. “It has taken a million years. It is time for a woman.”

Dan Merica contributed to this report