Sentenced to 55 years, Weldon Angelos is released from prison early 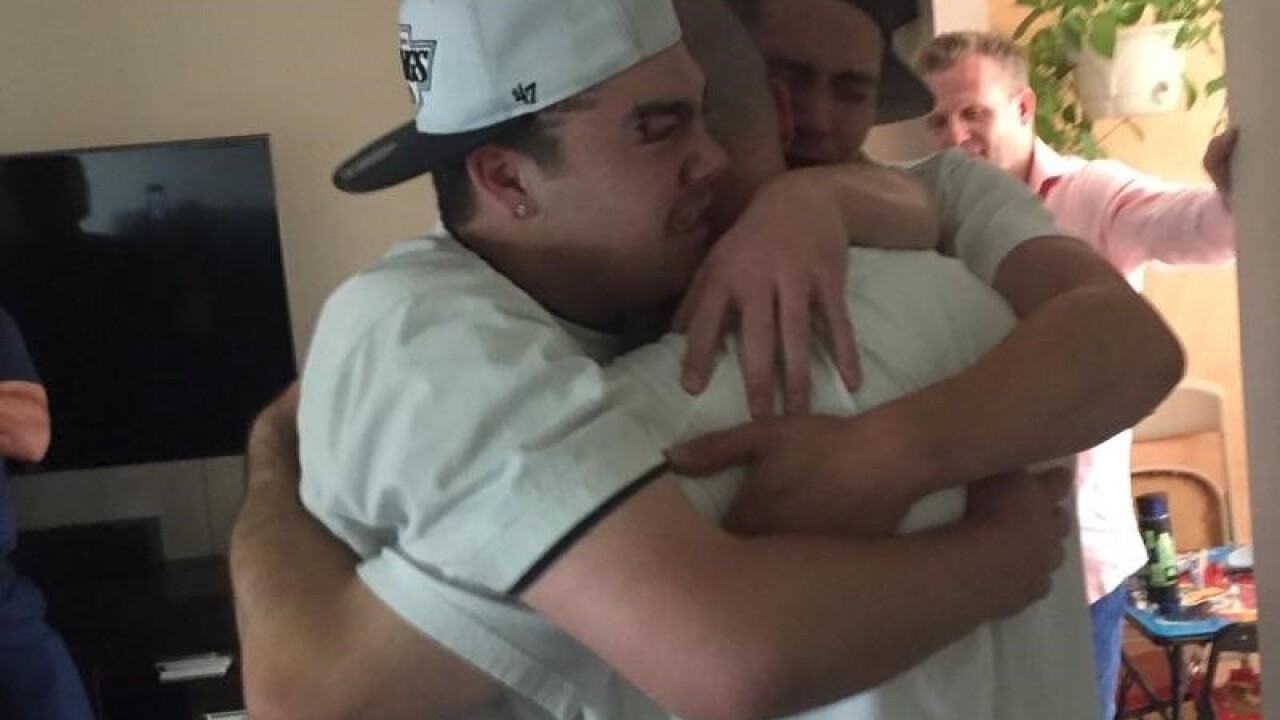 Weldon Angelos hugs his sons after his unexpected release from a 55-year sentence. Image courtesy family.

SALT LAKE CITY -- A Utah man who became a symbol of what some say is the unfairness of mandatory minimum sentences has been released from prison after 13 years.

Weldon Angelos was released on Tuesday and returned home to family in the Salt Lake Valley. The court granted a reduction in sentence, but it's not clear why because part of the federal case is now sealed.

He's now beaming with joy, and can't hug his three children hard enough after not being home with them in more than a decade.

"I just keep hugging them every time I get a chance," Angelos said.

The three were just children when he went to prison in California in 2004, his youngest just an infant.

Now, his son Anthony is 19, Jesse is 17 and his daughter is Meranda 13. Angelos surprised his two sons on Tuesday, by unexpectedly walking through the front door of his sister's home. Angelos said he himself was surprised, as he did not expect to be released this week.

Weldon Angelos' sons and one of their girlfriend's shocked to see Angelos released. Image courtesy family.

Photos show the looks of shock on his sons' faces. The tears and love poured out.

"They were just crying, hugging me, saying they love me and that they're glad it's over," Angelos said. "They wouldn't let go of me."

Angelos was originally sentenced to serve 55 years in federal prison after being convicted for selling marijuana. The case gained notoriety because of the many objections to the mandatory minimum sentence -- including from the judge who imposed the prison term. Former U.S. District Court Judge Paul Cassell said Angelos' case is one reason he stepped down from the bench.

Petitions were launched asking President Obama to grant clemency to Angelos. Cassell himself sent a letter to the president urging Angelos' release.

Weldon Angelos hugs his sons after his unexpected release from a 55-year sentence. Image courtesy family.

"I'm still stunned over all the support I've received," he said.

President Obama did not commute Angelos' sentence, and the reason for the release remains unknown.

While the Angelos family hopes for change, for now, they're focused on making up for lost time. And enjoying every minute of being back together.

"It was the most amazing surprise I've ever seen," said Lisa Angelos, Weldon's sister.

Angelos isn't sure yet what's next for him.

"There's just so many things I could do," he said. "I'm just going to take it easy, and relax for a couple weeks and see what happens."

The U.S. Attorney's Office for Utah, which prosecuted Angelos, did not immediately respond to a request for comment on Friday night.