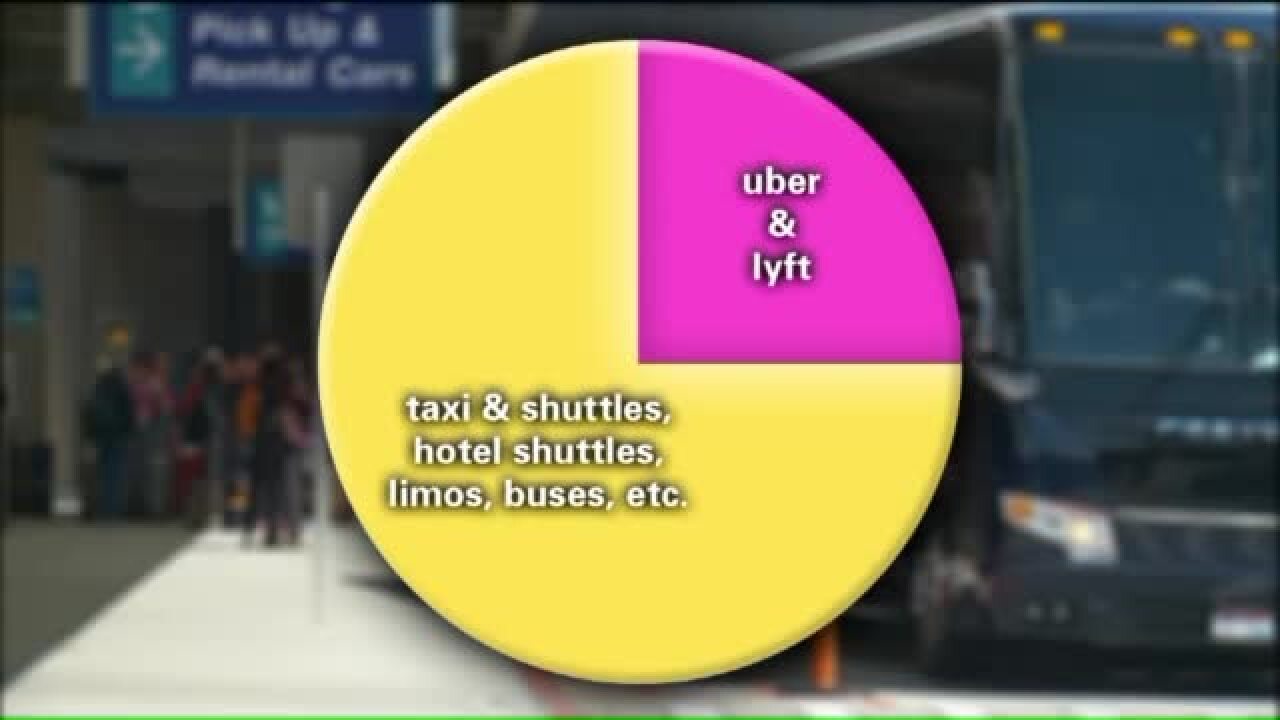 SALT LAKE CITY -- Taxi and shuttle drivers are saying ridesharing companies like Uber and Lyft are stealing their business at the airport.

Salt Lake City International Airport said those businesses have taken a strong hold on the market since September, which is when the airport unrolled a pilot program and officially opened the market to those drivers.

Head to the airport, and you'll see Uber and Lyft drivers mixing with passenger cars at the pickup and drop-off terminals. The only giveaway to the businesses is the little “U” or pink “Lyft” decals displayed on the windshield.

“It was wonderful, way better than a taxi,” said Uber customer Caleb Scharpe after his first Uber ride on Thursday.

Passengers like him said Uber offers what taxis and shuttles can’t: cheap fares.

“About half, half price,” Scharpe said of how the cost compares to cabs.

Many like Scharpe are now ditching traditional taxis and shuttles in favor of the trendy mode of transportation.

The Salt Lake City International Airport’s been tracking the numbers since that market officially opened in September.

“They have managed to capture 25 percent of the airport’s ground transportation marketplace,” Nancy Volmer, an airport spokeswoman, said.

A quarter of transportation is now divvied out to the ridesharing industry. That leaves taxi and shuttle companies, hotel shuttles, limousines, buses and others crammed in to the rest of the pie.

She said companies like Blue Shuttle Express are doing what they can to keep the competition even, but they just can’t offer the same low fares.

“If we charge the same rates that they are charging, we will be broke,” Boothe said.

Boothe hopes it’s their customer service, and business with hotels that don’t offer shuttles of their own, that will help pull companies like Blue Shuttle Express through.

Plus, some customers still favor tradition over trend.

“I know Uber’s been coming out recently, and I’ve heard that there’s good deals also, but it's just new, I'm unsure about it,” said Tiffany Miller, who used Blue Shuttle Express to get to the airport.

Regardless of what travelers choose, Volmer said they will be keeping track to see just how much of a mark these companies are making.

Volmer said she isn’t sure yet if the spike in rideshare services is an anomaly, or a long-term trend that will continue.

"We are pleased that riders and drivers have embraced ridesharing services like UberX to and from Salt Lake City International Airport. When residents and visitors have access to reliable and affordable transportation, cities become more connected than ever."

"People in Salt Lake City have welcomed Lyft, so it’s no surprise that travelers are using it more as their safe, convenient ride at the airport. Expanding access to reliable transportation options can only benefit consumers, and we’re proud to have worked with Mayor Becker and the airport staff to be the first rideshare at SLC."