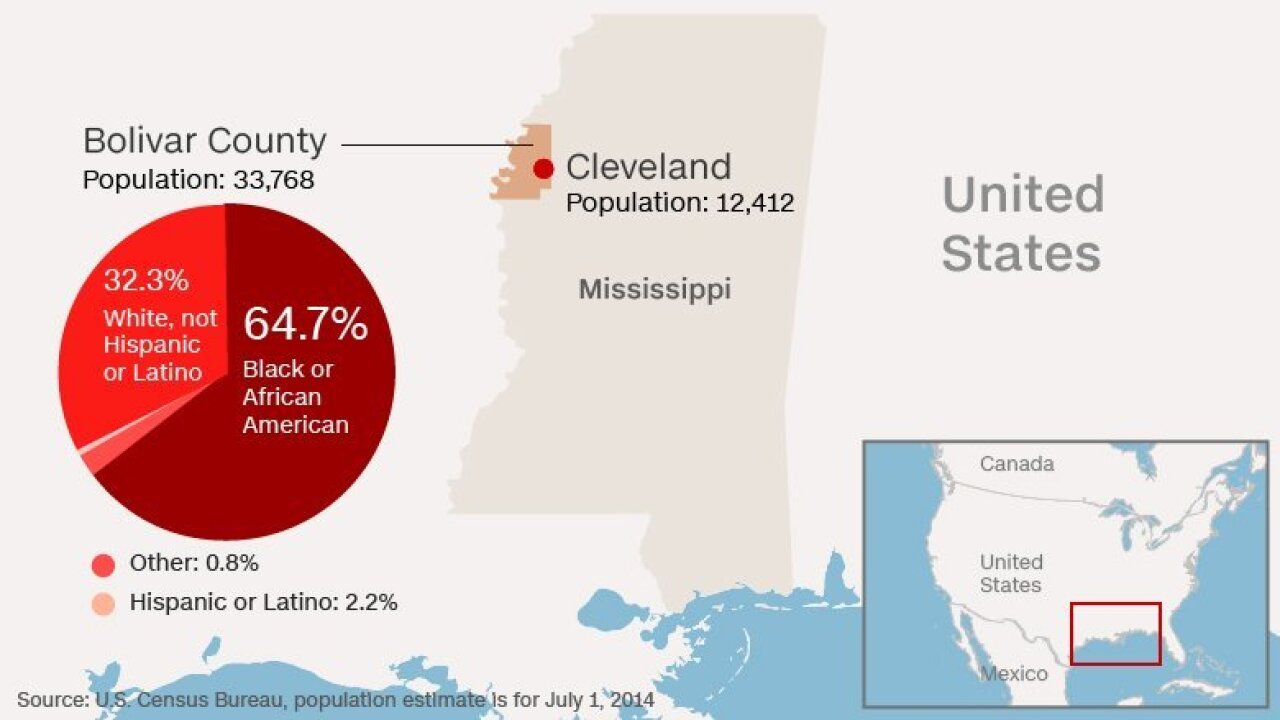 Residents of Bolivar County in Mississippi filed an action in 1965 claiming schools were segregated. n last week’s ruling, a judge chose a federal plan for desegregation over a local one.

Living on the “other side of the tracks” isn’t just a cheap idiom in Cleveland, Mississippi.

Court documents show that 62 years after the U.S. Supreme Court ruled school segregation unconstitutional, the schools in this west Mississippi town of 12,000 are still divided, black and white — and the abandoned Illinois Central Railroad tracks that run through town serve as the line of demarcation.

“Half of Cleveland’s schools — the schools on the east side of the railroad tracks — are all black or virtually all black. The majority of the schools on the west side of the railroad tracks, including Cleveland High School, Margaret Green Junior High School, and Parks Elementary School, enroll a student body that is at least 20% more white than the student population,” read a Friday federal court opinion ordering the integration of the district’s schools.

The case, which has been navigating the judicial system for more than 50 years, began when 131 minor children of Bolivar County, through their parents and guardians, filed an action claiming that what is now the Cleveland School District maintained a policy of operating schools “on a racially segregated basis.”

“The delay in desegregation has deprived generations of students of the constitutionally guaranteed right of an integrated education,” U.S. District Judge Debra M. Brown wrote in her decision.

“This failure, whether born of good faith, bad faith, or some combination of the two, has placed Cleveland in the unenviable position of operating under a desegregation order long after schools in bastions of segregation like Boston, Jackson, and Mobile have been declared unitary.”

The Cleveland School District was none too pleased with the decision and issued a statement saying that it stood by its proposal for a “combined middle school with two racially balanced high schools,” a plan the feds rejected. The board is considering its options for appeal.

To be fair, Cleveland is hardly the only locale with segregated schools. A recent report from UCLA’s Civil Rights Project shows that the percentage of “intensely nonwhite schools” — that is, those where fewer than one in 10 students is white — are on the uptick, and it might surprise you where most of these schools are situated. More on that shortly.

Brown’s decision involved competing plans to desegregate the schools, two put forward by the school district and another by the federal government.

The federally proposed plan, which calls for consolidating the district’s high schools and middle schools at the beginning of the 2016-2017 academic year, was chosen.

Both parties were directed to give the court a proposed timeline to implement the federal plan within 21 days of the order.

“Six decades after the Supreme Court in Brown v. Board of Education declared that ‘separate but equal has no place’ in public schools, this decision serves as a reminder to districts that delaying desegregation obligations is both unacceptable and unconstitutional,” said Vanita Gupta, the head of the Justice Department’s civil rights division.

“This victory creates new opportunities for the children of Cleveland to learn, play and thrive together. The court’s ruling will result in the immediate and effective desegregation of the district’s middle school and high school program for the first time in the district’s more than century-long history.”

Not everyone agreed this is a victory. According to CNN affiliate WATN, the school district’s board of supervisors met behind closed doors Monday night, after which board president George Evans emerged declining to comment because of “ongoing litigation.”

John Hooks, an attorney for the school district, told CNN the school board is continuing to evaluate the opinion and has not decided whether to submit an appeal.

Treyzar Eatmon, who attended the historically black East Side High School, told WATN the decision was going to “cause a lot of problems,” while De’Audriana Jones, who also attended East Side High, was concerned “it’ll be an uproar.”

“So many people (are) set in their traditions and what they like and what they’re used to,” Jones told the station.

In a letter to parents, the school board said a federal court had described Cleveland High School as “an educational utopia,” while Newsweek magazine had praised East Side High in 2014.

“It is the desire of the Cleveland School District to continue this course of success for the betterment of all students,” the letter said. “The Board believes the Department of Justice’s plan would limit choices of both parents and students, disrupt proven successes occurring at all schools and ignore the interests of the community as a whole.”

Five decades in the courts

The Bolivar County parents and guardians filed the original complaint “on their own behalf and on behalf of all other Negro children and parents” about 11 years after Brown v. BOE.

Those parents spoke of the disadvantages they felt their children faced in a supposedly separate but equal system, and many of those concerns were echoed by parents, faith leader, former teachers and coaches who testified in federal court in 2012 and 2015.

“They described the stigma long associated with the district’s black schools and the sense among black children in the community that white children attended better schools,” the ruling said. “They testified that consolidation was the only way to bridge the divide and expressed a willingness to take the steps, however difficult, to secure equal educational opportunities for their children and grandchildren.

To see the case’s journey in more detail, follow the timeline below.

The Cleveland School District enrolls about 3,600 students, about 67% of who are black and 29% are white.

Four of the 11 schools in the district, however, have student bodies that are 95% black or higher: Cypress Park Elementary School, D.M. Smith Middle School, East Side High School and Nailor Elementary School.

Those schools sit on the east side of the tracks, and some residents spoke to the tradition of the district’s “track schools.”

Still, not all residents supported the plan to combine schools.

District officials unanimously opposed the proposal when testifying. One board member called the loss of choice in schools for his children “insulting,” according to court documents.

Many were concerned about the loss of extracurricular and educational opportunities that came with having more schools.

The district’s “Plan A” centered on giving parents and students more academic choices.

Eighth-graders, for example, would be given an opportunity to enroll at either of the district’s high schools, and admission would be granted on a first-come, first-serve basis.

The plan also aimed to improve academic offerings at East Side High.

Judge Brown, however, ruled against the plan because similar “freedom of choice” measures had not worked to help achieve desegregation.

“Because Plan A’s freedom of choice plan would leave D.M. Smith and East Side High as one-race schools, the plan is unconstitutional,” she said.

The other plan would have put all the high school students in one of the schools, and then turned the other into a [science, technology, engineering and math] magnet with local arts partnerships. The middle schools would be combined, and the extra space would then be used for the elementary school.

Brown called this plan inadequate and infeasible. She also said it “unreasonably delays desegregation” for the district’s middle schools.

Monday’s Civil Rights Project report, “Brown at 62: School Segregation by Race, Poverty and State,” says that overwhelmingly nonwhite schools tripled between 1991 and 2007, while the percentage of schools where 90% or more of students are more white have declined by half.

To comprehend those numbers, you must first realize the changing demographics of American public schools. Since 1970, white enrollment dropped from 79% to 50%, black enrollment remained static at 15%, Latino enrollment jumped fivefold from 5% to 25% and Asians now account for 5% of students, as opposed to less than 1% in 1970.

“The result of these diverging trends is that whites can perceive an increase in interracial contact even as African-American and Latino students are increasingly isolated, often severely so,” the report says.

So, where are all these segregated schools? Perhaps not where you’d think.

Though five of the top six states for 2013-2014 black enrollment are in the South (Mississippi, Louisiana, Georgia, South Carolina, Maryland and Alabama), New York and California are dungeon dwellers when it comes to black exposure to white students. New York is also tops when it comes to the percentage of black students attending nonwhite schools, according to the report.

California and New York, too, are at the bottom when it comes to Latino integration, the report says.

While it might seem more of these low-performing states would be in the South, “the ironic historic reality is that the decisions of the U.S. Supreme Court supported very demanding desegregation standards for the South, while the interpretation of Supreme Court decisions and federal legislation limited the impact of Brown in the North and West,” the report says.

While the report blames the trend since 1991 on an increasingly conservative U.S. Supreme Court approving the termination of desegregation plans, local variables play roles as well.

Maryland, for instance, experienced a “substantial” suburban residential resegregation, according to the report, and California has seen its white student population decline “drastically” as its Latino population “soared.” Michigan dropped down the ranks, which “probably relates to the drastic shrinkage of the Detroit Public Schools and the suburbanization of black families in that metropolitan area.”

The report closes by applauding efforts of President Barack Obama’s administration but asserting there is much more work to be done. School segregation perpetuates the “stratification in the society” and leaves students unprepared to “in a complex society which will have no racial majority,” it says.

“Segregated schools build and sustain a segregated society,” the report says. “We need to create schools that build a society where the talent of all is developed and students of all races/ethnicities are prepared to understand and live successfully in a society that moves beyond separation toward mutual respect and integration.”