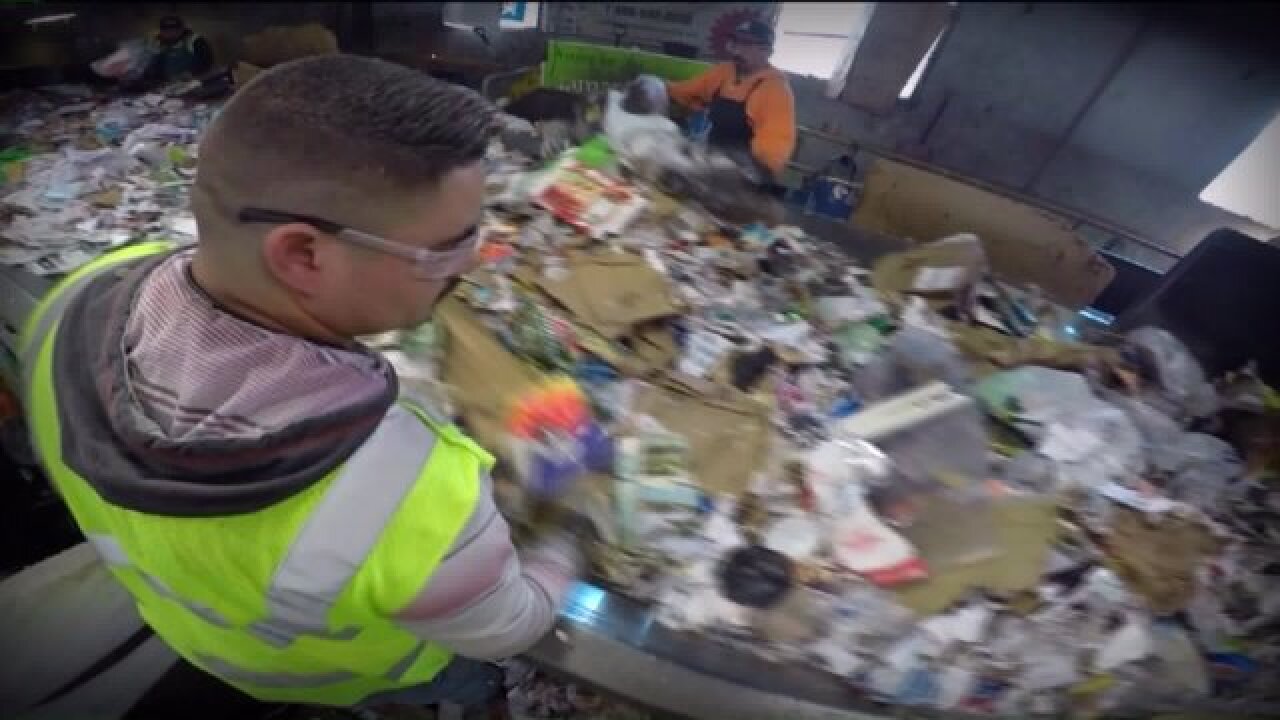 SALT LAKE COUNTY, Utah -- During a normal day at Rocky Mountain Recycling in South Salt Lake, a steady stream of trucks delivers recyclables collected from around the Salt Lake Valley and beyond.

Then men, women and machines work frantically to sort and process the goods at a rate of roughly 20 tons per hour.

"That presort is there to take contamination out," said Larry Gibbons, director of business development.

At the recycling plant, "contamination" comes in many forms. Liquid left in containers such as milk jugs and Coke cans can spread to other recyclables. Glass bottles, which should have been left out of residential "Blue Bins" in the first place can break, sending shards of glass into otherwise good material.

But the main nemesis is the common plastic bag.

"It gets wrapped up in the wheels and it clogs up different parts of the system," Gibbons said.

When that happens, the entire operation grinds to a halt while the machinery is freed of plastic.

Most everyone knows the saying, "Time is money." But for recyclers, it's especially true, as they race against shrinking prices for the commodities they handle.

"Before, the recyclables fetched quite a large dollar. Unfortunately that has declined," said Pam Roberts, executive director of the Wasatch Front Waste Recycling District.

Much of the downturn in prices for commodities like aluminum, she said, is due to China's slowing economy, which creates less demand for raw goods.

The mathematics are complicated, but to be clear, taxpayers and residents who enroll in pickup programs have always helped sustain recycling, in the interest of long term benefits. But there is a part of the puzzle which changes from year to year: how much money cities and counties receive or pay to the recyclers they contract with from year to year.

In 2014, Rocky Mountain Recycling paid Salt Lake County more than $400,000, as part of a contractual obligation. In other words, when they make money, the county gets a cut.

On the flip side of the same contract however, Rocky Mountain must keep taking recyclables even when the prices of commodities drop. For this reason, early projections for 2016 indicate the county will likely have to pay Rocky Mountain more than $300,000 to offset their costs.

But even if the county has to cut a check to Rocky Mountain for this year's services, it'll be worth it according to Ashlee Yoder, the Sustainability Manager for the Salt Lake County landfill.

"Our landfill is projected to last until the year 2065," Yoder told FOX 13 News.

When it's full, county residents will have a new, and likely very expensive problem. She believes the solution to the landfill's timeline is more recycling, noting that 50 to 60 percent of what goes into the landfill on any given day could have been recycled.

Yoder adds recycling could be more profitable if recycled goods stayed closer to home. In contrast to cardboard, much of which gets sent to China, she points to Momentum Recycling in Salt Lake City.

Momentum has recycled 75 million pounds of glass since 2008.

"The lion's share stays in Utah," said John Lair of Momentum. "The biggest customer for the recycled glass when it's finished in our plant is the Owens Corning fiberglass insulation plant in Nephi, Utah. They buy about 60 percent of what we produce here."

Recycling advocates agree Momentum has the right idea, building local markets for recycled goods rather than relying on overseas demand.

Glass collection programs with Momentum as the recipient will be expanding throughout Salt Lake County this summer, and Momentum has an open house planned at their Salt Lake City recycling plant on May 23, from 1 to 4 p.m.