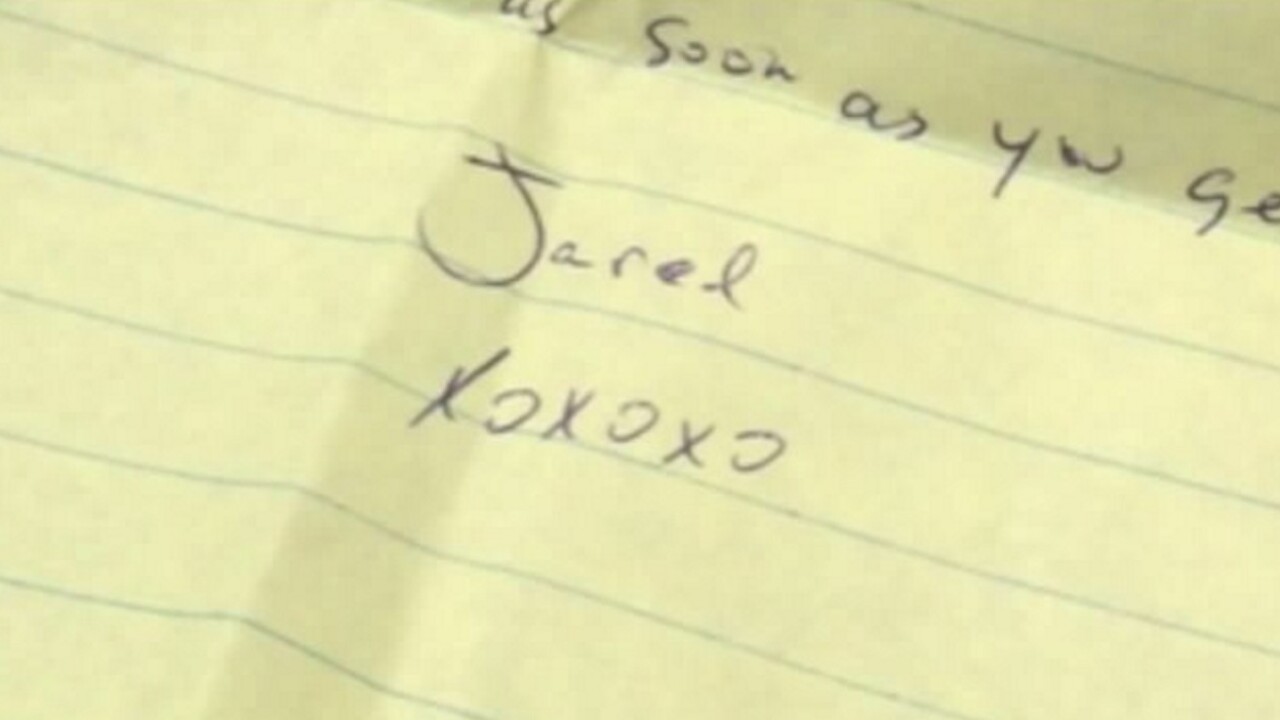 INDIANAPOLIS, Ind. –- A woman who says Jared Fogle wrote her from prison is sharing the letter with the public.

Brena Firkins told WXIN that she had a very personal relationship with the ex-Subway pitchman several years ago.

The two met on a dating site about eight years ago, according to the report Firkins says she had a sexual relationship with Fogle for about a month before they lost contact.

“We just had a good time,” Firkins said. “He was, like, real generous. He took me shopping a lot. He paid for everything. He paid for my rent. He would give me gift cards.”

When Firkins heard about Fogle's prison sentence, she decided to reach out.

“I kind of felt bad for him, and I wrote him to see how he was doing. And he wrote me back and sent this letter that was kind of horrifying,” said Firkins.

In November 2015, a federal judge sentenced Fogle to serve 15-and-a-half years behind bars after he pleaded guilty to conspiracy to receive child pornography and traveling to have sex with a minor.

Prosecutors say Fogle viewed those videos and knew what Taylor was doing. He didn't do anything to stop him, prosecutors said, adding that Fogle knew some of the minors.

According to court documents, Fogle paid to have sex with minors, contacting prostitutes to facilitate the encounters.

In a short one-page letter that Firkins shared with WXIN, Fogle gives us a small glimpse into life behind bars for and what he said has been unfair treatment by the media and others.

The envelope is marked with Fogle’s prison identification number, 12919-028.

“I made a couple of mistakes but nothing like the media reports have said," part of the letter reads. "They are making me into some sort of monster which is absolutely not true.”

“I’m currently appealing my prison sentence and am hoping for the best with it," the letter says. "Bottom line, my director of my foundation and friend did some bad stuff and tried to throw me under the bus with him.”

Fogle asks Firkins to send more pictures writing, “Are you dating anyone? I need you in my life big time. I’ve thought a lot about you over the years but had no way to contact you.”

After learning Fogle had access to email, Firkins says the two have exchanged a few emails, but claims they are now done talking.

According to WXIN, Fogle got treatment and attended Sex Addicts Anonymous meeting before he was sentenced.

“He hasn’t figured out what he needs to do to get healthy,” said Sheets. “From that letter, he’s minimizing, and sex addicts or people that have sexual compulsivity tend to minimize, justify, and defend themselves, and that’s what I see in the letter. He’s obviously a man who hasn’t had enough recovery yet to be 100 percent responsible for his behavior.”

Oral arguments for Fogle’s appeal are scheduled for next month in Chicago.