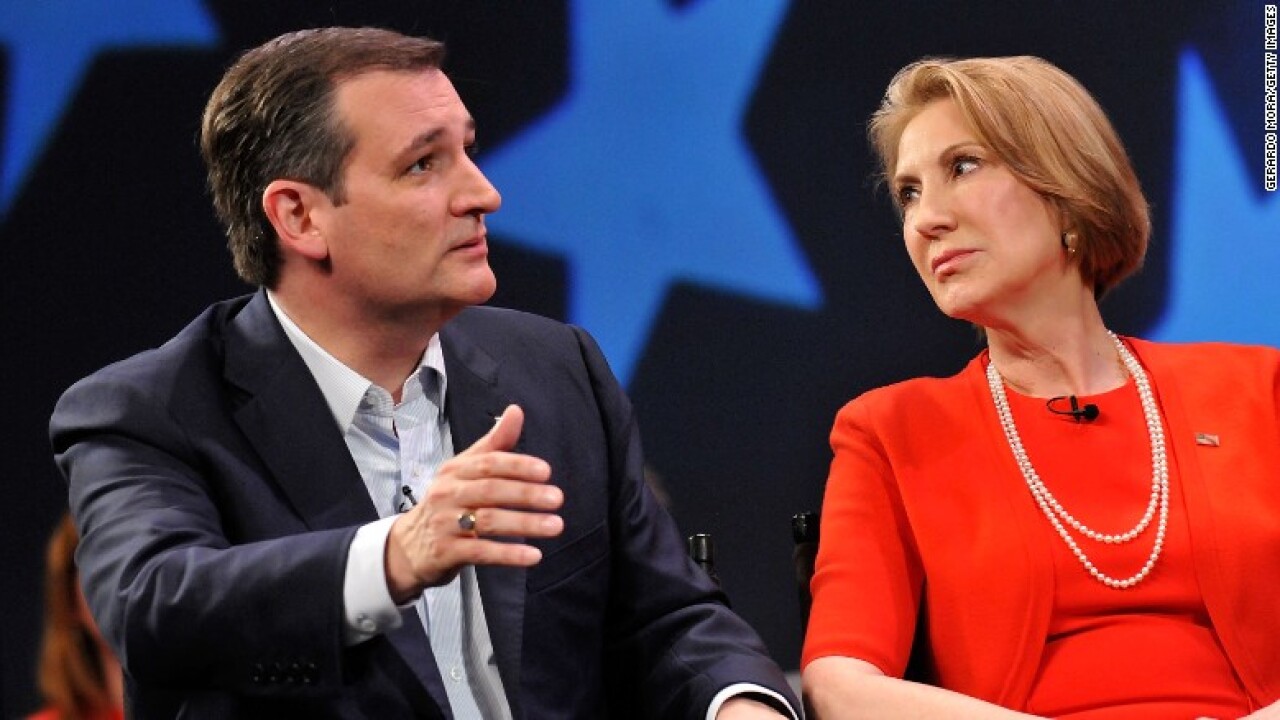 “After a great deal of consideration and prayer, I have come to the conclusion that if I am nominated to be president of the United States that I will run on a ticket with my vice presidential nominee Carly Fiorina,” Cruz said during a rally in Indianapolis.

Indiana votes Tuesday in the next GOP contest. Cruz must have a strong showing in the Hoosier State to help block rival Donald Trump from securing the 1,237 delegates necessary to win the nomination, and keep alive his hopes of a contested Republican National Convention.

Cruz is trying to recapture the narrative and keep himself relevant after Trump seized momentum in the 2016 race with a sweep of all five East Coast states on Tuesday, which puts him closer to having enough delegates to win the Republican nomination. The unusual move from the Cruz campaign also comes just hours after the billionaire businessman, who is trying to look like the presumptive nominee, gave a high-profile scripted speech on foreign policy.

Trump responded to the news of Fiorina’s selection in typical fashion — using a tweet, which featured a clip of Fiorina criticizing Cruz on CNN earlier this year.

“Ted Cruz is just like any other politician; he says whatever he needs to say to get elected,” Fiorina says in the four-second clip. Trump’s tweet included the caption, “Agreed!”

Fiorina has been a regular — and popular — presence on the Cruz campaign trail in recent weeks since she endorsed the Texas senator in early March. And the Cruz campaign may see her California roots as an asset ahead of that state’s primary on June 7.

Fiorina built her ill-fated presidential bid around her business experience as former president of Hewlett-Packard, a company she led from 1999 to 2005. She also ran for Senate in California in 2010 against Democrat Barbara Boxer. But during her tenure at HP, she led a divisive merger with Compaq and criticism of her leadership of the company was a key focus of Boxer’s effective campaign against Fiorina.

Fiorina also spent much of her time on the trail attacking Democratic front-runner Hillary Clinton, drawing a contrast with the former secretary of state as the only woman on the Republican side. Cruz has highlighted that tactic on the trail with Fiorina, saying Clinton would be terrified of Fiorina.

Vice presidential speculation heated up this week after Cruz confirmed his campaign was vetting Fiorina as a running mate. Fiorina is well-liked by Cruz’s staff and has campaigned with him more than any other surrogate, and has spoken for him with reporters.

Typically, candidates do not name vice presidential picks until after they are the presumptive nominee and soon before the convention. But Cruz is pinning his hopes on a contested GOP convention — and after a disastrous two weeks of Northeast contests where Cruz netted just five delegates.

Fiorina frequently sparred with Trump during the primary. Trump was quoted in a Rolling Stone profile as complaining about Fiorina’s looks when she appeared on the television he was watching, saying, “Look at that face!”

Trump later argued he was referring to her “persona.”

She turned the attack into an asset, calmly responding to Trump during a CNN Republican debate, that she believed “every woman” in America knew what Trump was referring to in his Rolling Stone comments.