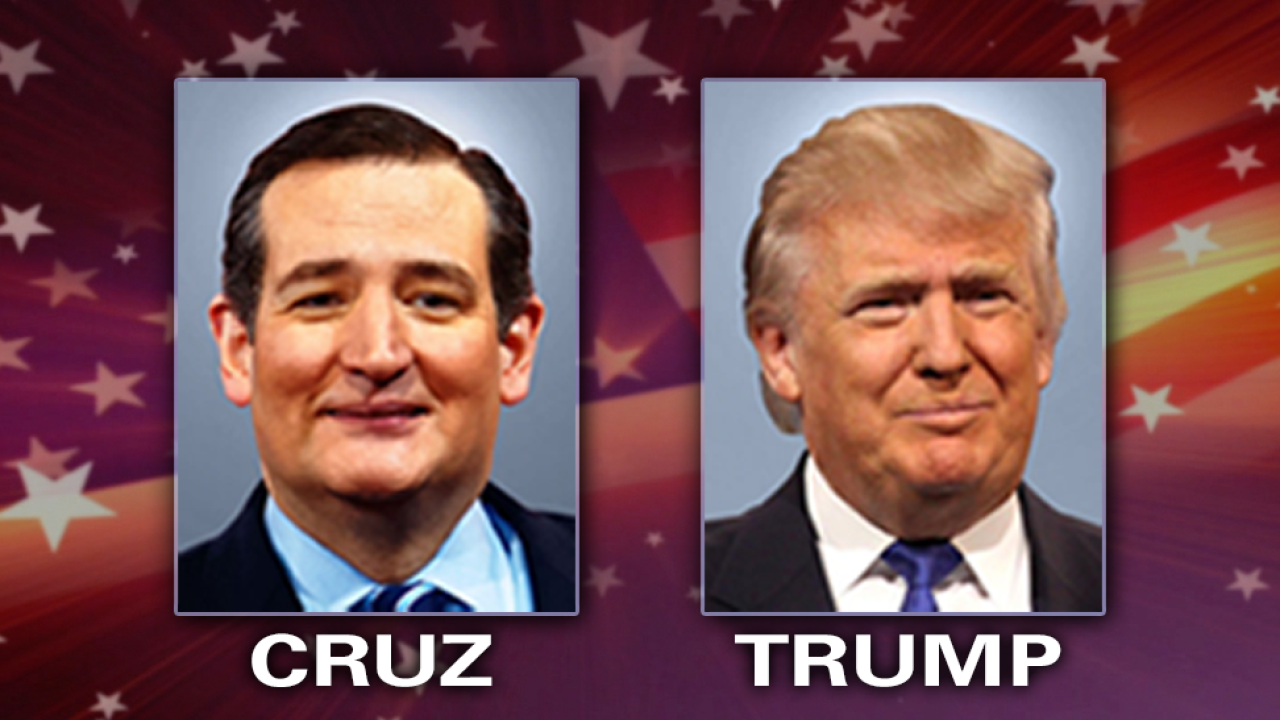 By Ashley Killough and Eugene Scott

HAGERSTOWN, Maryland (CNN) — Donald Trump on Sunday made some of his most direct accusations yet against Ted Cruz in the GOP nomination fight, saying the Texas senator is “bribing” delegates to come to his side.

Citing unspecified news articles, Trump told the crowd at a Western Maryland rally that Cruz is “wining and dining” delegates in his bid to defeat Trump on a second ballot at this summer’s Republican convention.

Trump has been ramping up his criticism of his chief Republican presidential rival in recent days, even speculating on Saturday whether super PACs supportive of Cruz are “buying” the election.

But on Sunday, Trump flat-out accused Cruz of courting his delegates illegally.

“I just read an article about, Cruz is working really hard to — I don’t want to use the word ‘bribe’ — but, to bribe the delegates from all over the place,” he said, nearly shouting out the second “bribe.”

Cruz’s campaign did not immediately respond to a request for comment about Trump’s latest attack. But Cruz’s campaign delegate adviser Ken Cuccinelli disputed similar accusations in a CNN interview earlier this week.

“I call foul and BS,” he told CNN’s John Berman. “This is just more outrageous charges from the Trump campaign. … If there’s any not-nice tactics going on here, the Trump people are pushing delegates away from themselves and to us because of their frankly rough and unprecedented Gestapo tactics.”

Cruz’s camp has been beating back allegations of bribing delegates all week as the Trump campaign has been sharply critical of what it considers to be a “rigged” delegate allocation process.

Trump has repeatedly knocked the primary system as a “rigged” process, and on Sunday he sounded skeptical about his campaign’s decision to send advisers to the Republican National Committee’s meeting at a posh resort in Florida last week.

“I said, ‘Do you really wanna do this? Do you actually wanna do this and spend the money for an airplane ticket to go there?’ They went to Florida. By the way, they had boats and yachts waiting to take delegates and everybody. Boy, these delegates. I think I wanna become a delegate,” he joked.

Trump’s accusations about Cruz’s campaign echoed criticism by his son, Donald Trump Jr., in an interview with CNN’s Jake Tapper that aired on Sunday morning.

“Ted Cruz has no chance of winning this without bribing the delegates. That’s his game at this point,” the son of the real estate mogul said.

Trump Jr. said if his father wanted to bribe delegates, he could — and do it very well.

“He could send his private plane and send them down to Doral, they could play golf for a week and then we win that delegate. That’s not the way this country should be run,” Trump Jr. said.

But the businessman’s oldest son said that he and his family might consider becoming more involved in the delegate allocation process.

“So are you or your sister, Ivanka, or Eric, or any other member of your family, are you planning to help your dad woo delegates one by one on behalf of your father?” Tapper asked.

“You know, I think we’ll do some of that, I think that’s natural,” Trump Jr. said. “I think we’re going to do what we need to do to win, to a point, but I think we want to win without having to do that.”

Trump Jr. also said the Republican National Committee would rather have Hillary Clinton elected to the presidency than allow Trump to be the Republican nominee.

“I think at this point, the Republican establishment would much rather just hand the things over to Hillary, hand the reins over to her, let her run it,” Trump Jr. said. “There’s no accountability in the party. ”

“They want to try to push someone else who has zero chance of winning anywhere else, it doesn’t make any sense to me. I have to certainly question their motives,” he added.