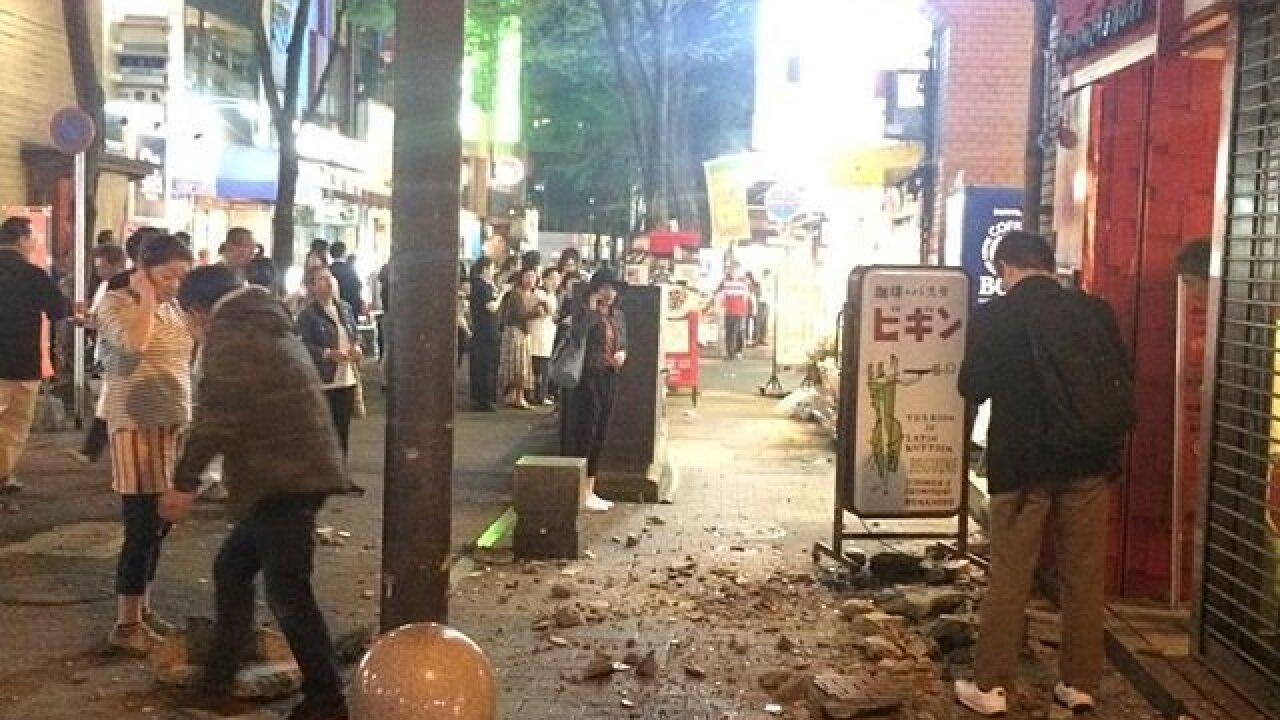 Tomoe Nishi had just finished eating Thai food when she felt Thursday’s earthquake in Kumamoto, Japan. She took this photo on Sannenzaka Street.

(CNN) — Daybreak in Japan should reveal the extent of the damage from a magnitude-7.0 earthquake that struck early Saturday on Kyushu island, the same region hit by a 6.2 quake two days earlier.

Rescuers scrambled to find survivors. TV Asahi showed crews crawling over a collapsed roof in an attempt to find an elderly couple. An 80-year-old man was pulled from the rubble, TV Asahi said.

The quake caused heavy damage in a wide area in Kyushu, Chief Cabinet Secretary Yoshihide Suga said at a press conference Saturday morning. He said 23 cases of people being buried under structures were reported so far.

According to Japan’s Fire and Disaster Management Agency, 7,262 people have sought shelter at 375 centers since Friday in Kumamoto Prefecture.

Suga said 20,000 self-defense forces are being deployed to the region for rescue efforts.

The U.S. Geological Survey reported that the latest quake struck just west-southwest of Kumamoto-shi and about 8 miles south-southeast of Ueki, the epicenter of the late Thursday tremor that left nine dead.

“No question, this is a large and very important earthquake,” said Doug Given, a geophysicist with the USGS. “And it will do a lot of damage.”

The quake prompted the Japan Meteorological Agency to issue a tsunami advisory for coastal regions of Japan on the Ariake Sea and Yatsushiro Sea around 2 a.m. Saturday (1 p.m. ET Friday). Tsunami advisories are issued when the tsunami height is expected to be between 0.2 and 1 meter (0.65 to 3.3 feet). A warning would be for larger tsunamis.

The agency subsequently lifted all tsunami warnings and advisories.

As Given noted, “the four islands of Japan are on the edge of what’s traditionally been known as the ‘Ring of Fire'” — a stretch along parts of the Pacific Ocean prone to volcanoes and earthquakes.

Victor Sardina, a geophysicist in Honolulu, Hawaii, told CNN that the latest quake was about 30 times more powerful than Thursday’s deadly tremor. He predicted “severe, serious implications in terms of damage and human losses.”

The shallow depth of the quake — about 10 kilometers, or 6 miles — and the densely populated area where it struck could prove to be devastating, according to experts.

‘Buildings were swaying and cracking’

“This looks like it’s going to be a very damaging earthquake. I think we can expect that this is going to be far worst” than Thursday’s tremor, said Tom Jordan, director of the Southern California Earthquake Center.

Television images showed mostly desolate streets, damaged buildings and shards of broken glass on the streets. Aftershocks as strong as magnitude-5.3 struck in the hours after the quake. In one part of Kumamoto-shi, dozens of people gathered outside in the night, sitting on the street away from buildings, some on blankets.

In short video posted to Instagram, people standing in the parking lot of a 7-Eleven in Kumamoto let out screams following an aftershock.

Journalist Mike Firn in Tokyo told CNN he felt the temblor in a building some 900 kilometers, or more than 550 miles away from the epicenter.

“The building started shaking,” he said. “It was swaying quite strongly for over a minute. … Buildings were swaying and cracking.”

The latest tremor suggests that the one Thursday was a foreshock, though USGS expert cautioned “that’s not to say that the Earth can’t produce a bigger earthquake still to follow.”

“But statistically, it’s more likely that this latest event will be followed by aftershocks, which are all smaller.”

This happened about a full day after rescuers found an 8-month-old baby girl — alive — in the ruins of a home destroyed by the earlier quake on Japan’s Kyushu island.

Rescuers had been told there was a baby inside the collapsed house, but aftershocks from the quake prevented the use of heavy equipment at the site. After six hours after the infant was trapped, she was pulled from the rubble early Friday.

“It was miracle she was unharmed,” said Hidenori Watanabe, a spokesman for the Kumamoto Higashi fire department.

Fifty rescuers — wearing dark uniforms and white hard-hats with lights — scoured the large pile of rubble that just hours before had been a home. The infant’s mother and grandmother had managed to escape.

The little girl was finally found safe amid the debris in a space under one of the house’s pillars, according to Watanabe.

This happened in the middle of the night, in an area lit only by spotlights.

Carefully, rescuers passed the barefooted baby to one another, before she finally got to crews on the ground and was taken swiftly away.

Prime Minister on the way to the site

Prime Minister Shinzo Abe will visit the earthquake-hit area in Kumamoto prefecture later Saturday, he said at a meeting at emergency response headquarters in Tokyo.

“I would like to see the site with my own eyes and hear from the victims directly,” Abe said.

Search crews were continuing to dig through rubble looking for other people trapped under collapsed buildings.

“The ground shook for about 20 seconds before the 6.2-magnitude quake stopped,” witness Lim Ting Jie said.

Two deaths occurred in Mashiki, the Kumamoto prefecture office said. One person died in a collapsed house, and the other died in a fire caused by the quake. Journalist Mike Fern told CNN that scores of buildings had either collapsed or caught fire, while the tremors triggered landslides, tore up roads and in one case, derailed a bullet train.

Nearly 800 people were injured, 50 severely. The prefecture office said 44,449 people had been evacuated.

Abe told Parliament early Friday — hours before the larger quake hit — that he’d mobilized 3,000 members of Japan’s Self-Defense Forces, police and fire services to join the rescue effort following the first quake. He said the government is “racing against the clock and will provide more personnel if necessary.”

The largest recorded quake to hit Japan came on March 11, 2011, when a magnitude-9.0 quake centered 231 miles (372 kilometers) northeast of Tokyo devastated the country.

The disaster killed about 22,000 people — almost 20,000 from the initial quake and tsunami, and the rest from health conditions related to the disaster.

“This experience has helped me to treasure my family members and relatives even more, and not take what I have and the people who support me for granted.”