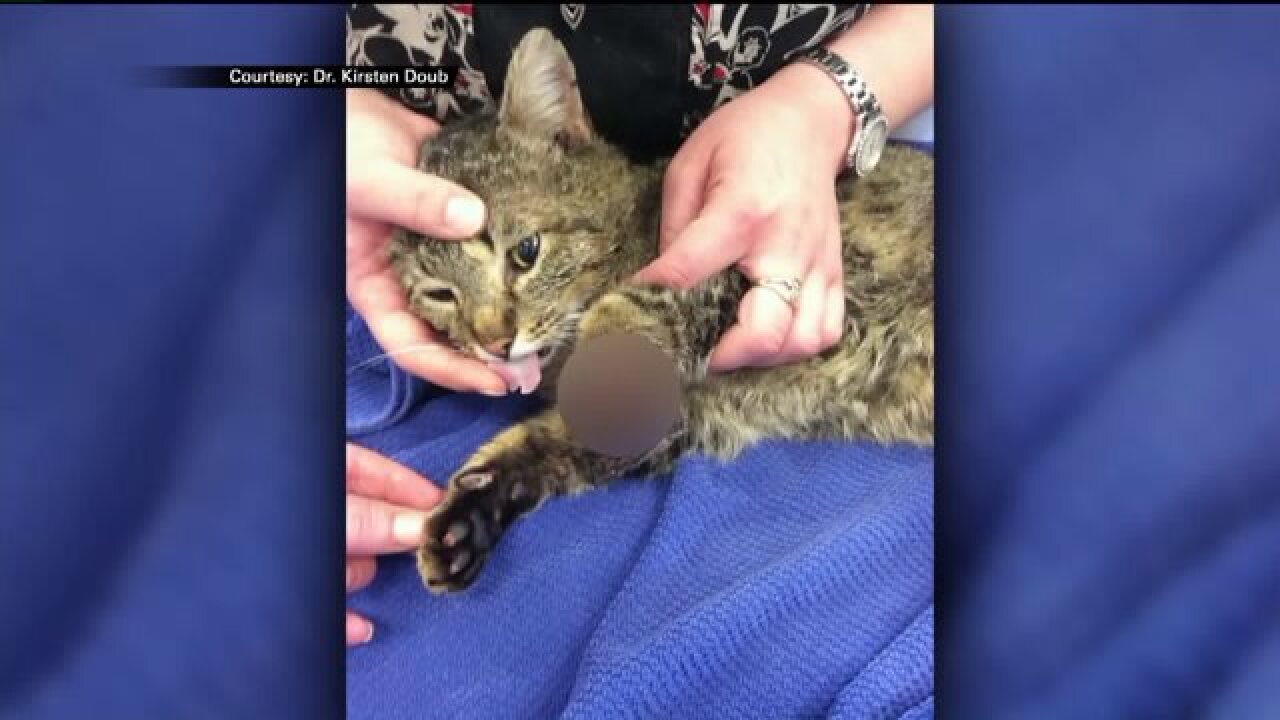 HOLLADAY, Utah -- Salt Lake County Animal Control is investigating after a cat turned up in a Holladay neighborhood with his paw tangled in a trap.

The Humane Society of Utah said whomever is responsible could face criminal charges, and, because the cat's injuries were so severe, a veterinarian had to put the feline down.

Mindie Booth retraced the steps the cat painfully took in front of her house in Holladay.

She walked through her yard, just as the cat did Friday morning, explaining how two LDS missionaries who spotted the cat tried to track him down and pick him up. The cat's paw was entangled in a foothold trap.

Booth said her babysitter called her, and she immediately came home.

"Poor kitty, his foot was hanging by a thread, and I could see bones," she said, describing the cat's paw. "It was horrible."

"It was completely macerated, open fractures, the whole distal part of the paw was missing, and all of the bones were completely crushed," she said.

Plus, the cat suffered damage to another paw, and his tongue was split.

Dr. Doub said they were left with little choice but to put the kitty to sleep. Based on the fact that he had no collar or microchip and wasn't neutered, she's guessing he was a stray.

The ordeal left a lot of questions.

"I was shocked when I saw that trap," Booth said. "It does it makes me nervous."

DWR took a look at photos of the trap, and explained that the foothold trap is meant for small fur-bearing animals like raccoons, muskrat and skunks.

What was this kind of trap doing in the middle of a Holladay neighborhood? That's what Salt Lake County Animal Control wants to know.

She said they told her: "Down here in the city, any kind of trap like that is illegal."

And this trap, they said, didn't appear to have a registration ID number attached to it, like traps are required to have by law.

"It's simply illegal to be setting a trap period, without being licensed to do so," said Deann Shepherd, The Humane Society of Utah's Director of Marketing and Communications.

She said if the trap wasn't registered, and with the cat having died after getting caught in it, whoever set it could get criminally charged.

"They can be charged with animal cruelty for causing injury or death to the animal," she explained.

Salt Lake County Animal Control confirmed they are investigating and have collected evidence. They could not comment further on the investigation.

Shepherd urges people to use live traps or to call animal control if they are trying to catch stray cats or nuisance animals, that way the animal issues can be addressed without them being harmed.