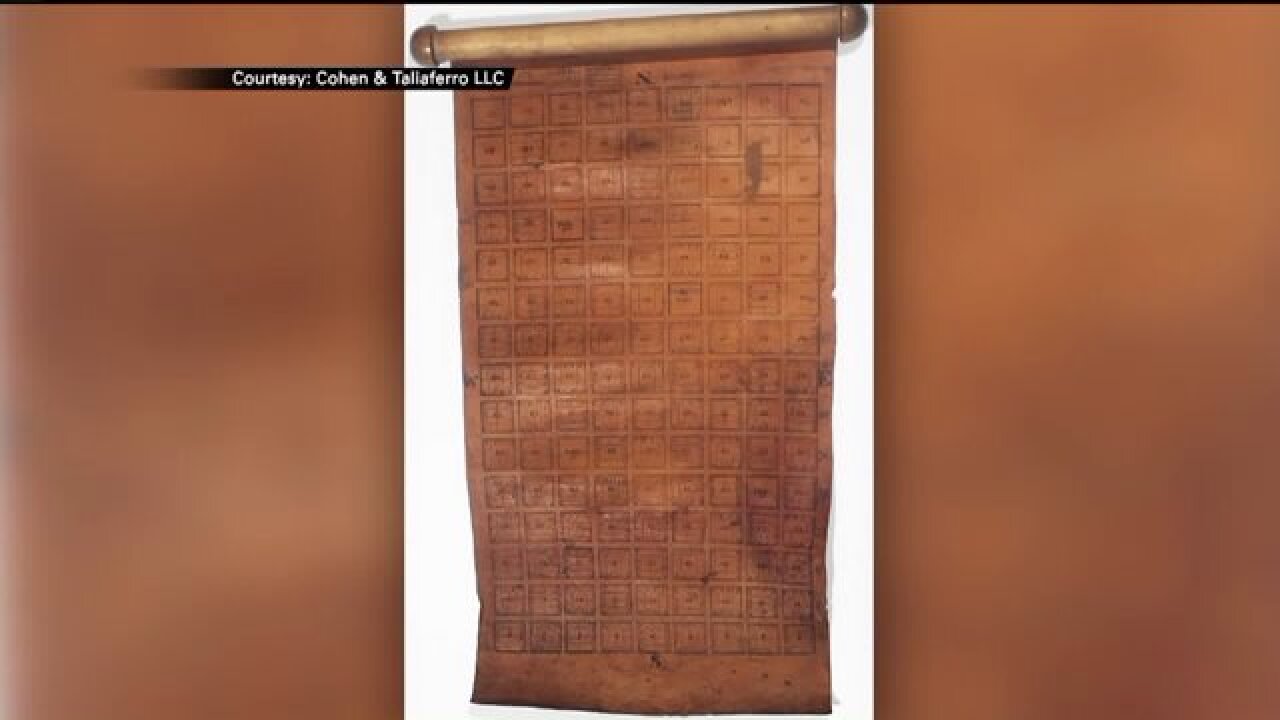 SALT LAKE CITY -- For the first time, the public is able to see Brigham Young's vision of Salt Lake City clearly laid out on paper—or rather on sheepskin.

The very first map ever drawn of Salt Lake City surfaced in New York City Thursday night, and it's for sale.

Titled, "Plat of the Great City of the Valley of the Great Salt Lake," the flexible sheepskin scroll features pen and ink drawn by surveyor Henry Sherwood, with direction from Orson Pratt, one of the Quorum of the Twelve Apostles of the LDS Church at the time.

They surveyed the land and drew up the map based on Brigham Young's vision and utterance of his plans for the area, Division of State History Director Brad Westwood said.

That was in August 1847, just days after Young's famous declaration, "This is the place."

It may look like a bunch of squares, but to history buffs, there's a lot to decipher on the scroll.

"I knew immediately, it was something unique and different," Westwood said about when he first learned of the map's existence about a year ago.

The historical artifact's been kept in private hands for 168 years.

It ended up in the family of Utah Surveyor General Jesse Fox, and it was passed down through generations, according to the map's current co-owner Paul Cohen.

He, along with his colleague Rick Grunder, purchased the map from descendants of Fox.

"I don't know of any other map in the world that shows the layout of the city before the city was built," he said on the phone from the New York Antiquarian Book Fair, where the map is on display for the next few days.

The map lays out the location of Temple Square, neatly outlines Salt Lake City's grid street system, and spells out the placement of public parks as well as plats of land.

It, "placed the center of town right next to City Creek," Westwood explained.

The center of town starts with the LDS Temple.

Though it wouldn't be built for years, the site of Temple Square is exactly where Young envisioned the Temple would stand.

He wanted it to line up with Ensign Peak, Westwood said.

Though it's hard to tell on the map, Young reportedly wanted wide streets, and to fill the plats of land with agriculture.

Young was, "hesitant about commercial development. He wanted it scattered," Westwood said.

Westwood explained that Young envisioned a city opposite of what was common on the tightly cramped East Coast and in Europe.

He also said Young wanted order, and space. The map left open blocks of land in the hillier area of the city northeast of Temple Square.

That area would eventually become home to the State Capitol.

While the public can browse the map this weekend, Cohen hopes to find the right buyer. He wouldn't specify a price, but said it could sell in the ballpark of $1 million to $1.5 million.

Westwood hopes a piece of such significance eventually makes its way back to Utah.

He said it's even possible a collector who buys the piece might go on to donate the artifact to an institution. Whatever happens with it, the map is certainly a significant piece of history that Westwood said is wonderful to see emerge into the public eye.

"It kind of has that boldness, that idea that, 'We're going to be able to do what we set out to do,'" he said.