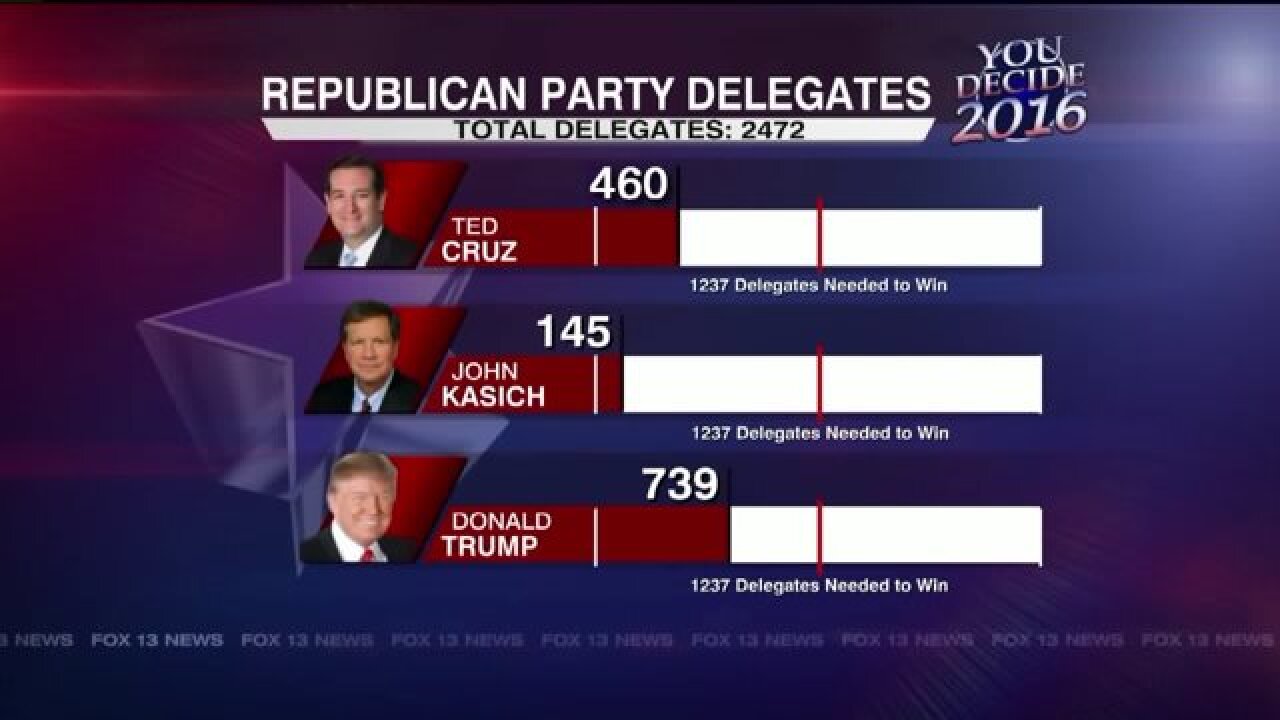 SALT LAKE CITY -- While not many Utahns voted for Donald Trump in last month's caucuses, voters across the nation are pushing him to the front of the GOP presidential race.

And, a new report shows Utah’s Republican delegates are looking forward to a contested convention.

It will take 1,237 delegates to clinch the Republican nomination. Trump currently leads with 739, while Ted Cruz is in second with 460 and John Kasich brings up the rear with 145.

Former Utah Gov. Mike Leavitt said a lot hinges on what happens ahead of the convention.

“The issue here is whether Donald Trump gets 1,237,” he said. “If he gets 1,237 delegates, then the convention will be a far different gathering than if he doesn't.”

Boyd Matheson is president of the Sutherland Institute, which is a conservative Utah think tank. He said Utah sent a resounding message on caucus night when voters rejected Donald Trump. Senator Ted Cruz, R-Texas, won by such a large margin, he grabbed all 40 of Utah’s delegates.

"Utah resoundingly rejected the mantra of fear and angst and anger and frustration,” Matheson said in regard to Trump’s lack of success with voters in the Beehive State.

"He's playing the members of the American public for suckers,” Romney said earlier this year during a speech at the Hinckley Institute of Politics. “He gets a free ride to the White House, and all we get is a lousy hand."

Citing a top aide with John Kasich’s campaign, CNN reported that Romney is encouraging Ted Cruz and John Kasich to work together to defeat the businessman.

“One of the big questions is whether or not there will be any cooperation between them, with a unified goal of finding ways to stop Donald Trump from getting 1,237 delegates,” Leavitt said.

Leavitt said the best path for success is through a brokered convention.

"In Republican politics, this has happened 10 times,” he said. “In only three of those did the leading vote getter, going into the convention, actually get the nomination. So, on seven occasions out of 10, the outcome was different than it looked like it might be going in.”

Republican caucuses in Wisconsin are set for this coming Tuesday.