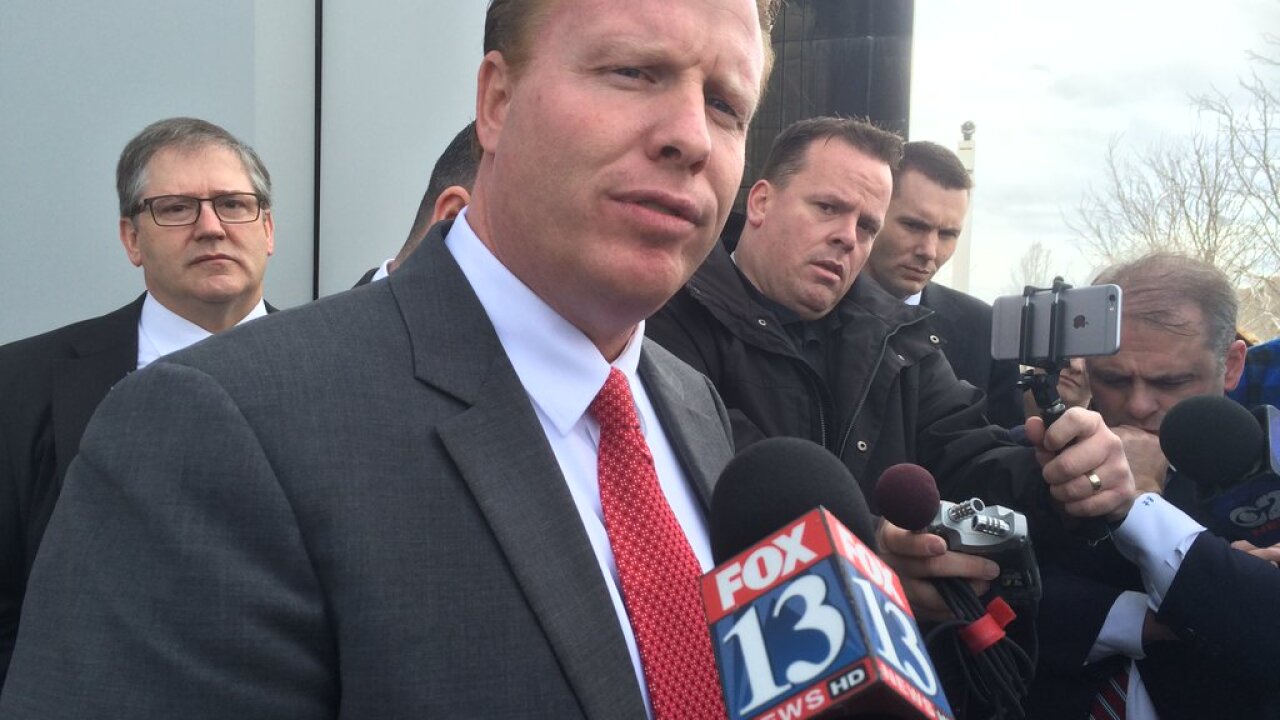 Jeremy Johnson speaks to reporters outside federal court after a jury delivered a split verdict in his fraud trial in March 2016. (Photo via Ben Winslow)

SALT LAKE CITY -- After deliberating for a week, a federal jury delivered a split verdict in the Jeremy Johnson fraud case.

"I feel good," Johnson told reporters outside the federal courthouse on Friday afternoon. "I feel like the jury had an extremely difficult job and they did the very best they could."

Federal prosecutors charged Johnson, Riddle and Leavitt with an 86-count indictment, accusing the St. George businessman of running shell companies to handle "charge backs" for credit card payments from his company, iWorks. Federal prosecutors accused the men of doing it because banks had flagged them on a list of merchants not to do business with.

Despite the jury delivering dozens of not guilty verdicts against Johnson, Leavitt and Riddle, federal prosecutors also claimed victory.

Jeremy Johnson speaks to reporters outside federal court after a jury delivered a split verdict in his fraud trial. (Photo via Ben Winslow)

Johnson and Riddle fired their lawyers and represented themselves in the seven-week trial. Outside of court, Johnson chuckled when asked if representing himself in court worked.

"The guy that had an attorney had all of them beat," he said. "I don't know. Depends on how you look at it."

Jeremy Johnson is at the center of the largest political scandal in Utah history. In 2013, he claimed then-Utah Attorney General John Swallow was going to bribe then-Senate Majority Leader Harry Reid, D-Nevada, on his behalf. The accusations led to the criminal cases against Swallow and his predecessor, Mark Shurtleff, who are now accused of soliciting gifts and donations from people facing investigation by the Utah Attorney General's Office.

Both Shurtleff and Swallow have denied wrongdoing.

"You didn't see any of those charges because they would have implicated powerful people," Mumford told reporters.

One of the prosecutors handling the prosecution of Swallow and Shurtleff said in an email to FOX 13 that the Johnson verdict has no immediate impact on their cases -- but Johnson will be a witness.

"However, there are multiple layers of overlap with the full scope and totality of the State of Utah inquiry, which also includes another potential key witness, Mr. Scott Leavitt, who has now been completely exonerated on all 86 counts," Davis County Attorney Troy Rawlings wrote. "What will have a pronounced impact on State of Utah cases is whether the Department of Justice (meaning the United States Attorney’s Office in both Utah and Washington DC) cooperates, like the FBI has done to a significant degree, in providing responsive material to all remaining requests for documents made by both the State of Utah and defense counsel for Mr. Mark L. Shurtleff."

Federal prosecutors wanted Johnson and Riddle jailed pending trial, but the judge ordered them put under GPS monitoring until a detention hearing next week. Government lawyers alleged Johnson had been caught trying to get into their offices after-hours, had texted a witness during trial and had been lurking around their parking garage.